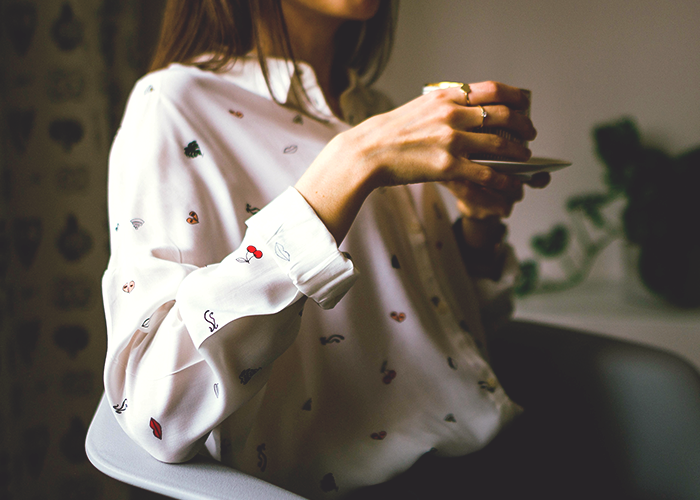 I don’t particularly enjoy talking to people at the gym. Call me an asshole, but I find that when I’m between the treadmill and weight racks

, it’s my time to de-stress from my day. And normally random conversations don’t really aid in that, which is why it was so strange for me to find myself talking to a random guy for 20 minutes in between my lunge sets.

Okay, maybe not a random guy, but more of a “we-went-on-one-date-and-then-ran-into-each-other-at-the-gym-two-years-later” guy. But that’s beside the point.

There we were, surrounded by fellas pounding their protein shakes and girls who look like they walked out of Nike ads, talking about the fork in the road he’s come to in his life and whether or not he should stay in Indiana or move back to California. He said he felt like instead of being proactive with what he’d wanted up to that point, he’d just kind of let life lead him wherever it wanted to take him.

And I looked at him and was like, yeah. I totally get it.

A couple of years after graduation, I read a book called The Impeachment of Abraham Lincoln

. As you can guess, it in no way related to money. But there was something in those pages that resonated with me, so much so that I wrote it down. And it was these two lines:

“The path she had followed up until now guaranteed a form of success; but the path of acting rather than reacting, although riskier, led not to mere success but to triumph.”

I can’t say that I’ve remembered that quote word for word, but what it was saying stuck with me. And that was this:

If you to want to live out your dreams, you’re going to have to take the reins.

But the truth of the matter is, easier isn’t going to get you anywhere. It’s not going to get you the better job, the happier relationship, the fitter body, or the financial stability. The only thing that will?

But action is scary. Action takes some effort, some thought, some ability. Action introduces choices, and we become paralyzed with the fear of making the wrong one.

I get it. I’ve been there. I’m currently there. There are always choices to be made, and some of the big ones take time. But you’ve got to take the reins back from the universe and make them if you want to get to where your dreams reside. Because I so badly want that for you.

I’m not sure which aspect of life you’re currently letting be controlled by something other than you, but if it’s money-related, I want to help you take back control and start going after those dreams.

Not tomorrow. Not next Monday. Not on New Year’s.

So put on your big girl pants, steal those reins back, and start checking off goals like it’s a grocery list. We got this, ladies (and gents!).

REACTIVE: Living paycheck to paycheck and/or just “getting by”

I know people hear the word “budget” and automatically think “restrictions,” but that’s not the case. All a budget does is allow you to decide where you want to spend your money, which means you can allocate all that cash to the things that are important to you…instead of the random crap that just seems to pop up.

So figure out where your priorities lie, and stop wasting so much cash on everything else. You’ll thank yourself later for it.

REACTIVE: Saving what you have at the end of the month

PROACTIVE: Saving what you want at the beginning of the month

I think it’s one of the laws of human nature that if you have money in your pocket, you’re going to spend it. We can’t resist. It’s innate.

Which is why it’s so important to combat this in whatever way possible, and setting up automatic transfers at the beginning of the month (or whenever you receive your paycheck) is the #1 way to do this. Instead of paying yourself last, you’ll pay yourself first, which means you’ll be prioritizing your goals over those late night online shopping binges. Two points for you.

REACTIVE: Worrying about retirement in your 30s

PROACTIVE: Contributing to your 401(k) or IRA

I get that your retirement seems ridiculously far away (especially for a 20-something) but here are the facts:

1. You’re going to want to retire earlier than 65 (trust me) and

2. The earlier you start, the greater the impact of compound interest

So don’t delay contributing to your retirement, because your twenties are the BEST years to make some serious gains. Even if you can only manage a little, do it — your 50 year-old self will be happy you did when you’re out of the clutches of the working world.

REACTIVE: Only caring about your credit score when you go to take out a loan

Did you know that a 1% difference in interest rate on a $200,000 mortgage could mean a savings of over $40,000? No lies, and your credit score is 100% responsible for whether you’re on the good or bad side of that equation.

Your credit score is basically telling a lender how risky you are, and the riskier you appear, the more in interest you’ll have to pay. That’s why it’s so important to pay your bills on time — payment history is the #1 factor in calculating your credit score, making up 35% of the total number.

If you need a little help, you can see what I use to ensure that I’m not missing anything here; otherwise, just make sure you set reminders on your phone for each bill you have to pay. You don’t want to miss out on $40K simply because you keep forgetting what day the phone bill is due.

REACTIVE: Accepting a decent salary because you don’t want to sound too greedy

PROACTIVE: Asking for what you deserve

It’s hard to ask for more money because money always seems to be a delicate subject. And when you like your job and the people you work with, you don’t want to overstep your bounds by being that greedy b$%#@ in cubicle 22.

However, you have to champion yourself and ask for what you believe is fair, given your work and the market. If you’ve been going above and beyond your job description and adding some major value to the company, then you need to pose the argument. Do your research, find what the market dictates for your current position, and then go give it a whirl. The worst that could happen is that they say no. And then you’re in the same position you were in anyway.

You deserve to have everything you want, but I, unfortunately, can’t do it for you. That would take a lot of energy, guys, and I just don’t have it. Thus, it’s up to you whether you want to close your eyes and blindly follow where life takes you, or open them, take some risks, and get what you actually want. I know what I want for you. Now it’s time to channel that inner #ladyboss status and get it for yourself.

Would love to hear from you: What’s one proactive thing you’ve done recently to make a change in your life?