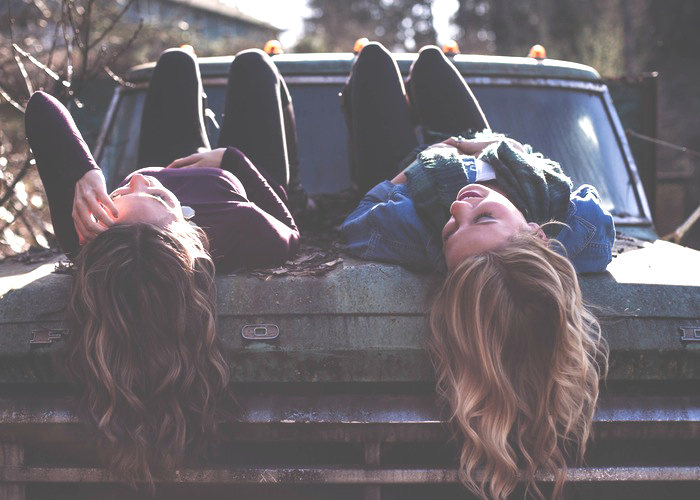 I have to admit that when I asked people about the piece of financial advice they’d give to their younger self, I wasn’t sure of my own answer. For me, it’s hard to remember exactly what my much younger self was doing with her money. I know I was earning money in high school (working at a bakery and a coffee shop) and saving about 80%-90% of it, which is what gave me a great savings account through most of college. However, I drained my savings when I went abroad during my junior year of college, and it was the first time I didn’t have a cushion in my account. So I would advise myself against that; it would have been preferable to always keep some sort of cushion. One of the best financial decisions I made in college was to wait tables: having waitressing experience helped me restore my savings account after being abroad, and it made me a good amount of money in college, and after.

Anyway, my own experience aside, I asked 15 men and women about the one piece of financial advice they’d give to their younger selves, and here’s what they had to say:

1. “Save the money ‘leftover’ after your paycheck. I used to have a mentality of like, ‘payday is tomorrow and I still have $400 — drinks all around!’ and it’s just childish and irresponsible. Most of us are childish with money at some point, and it’s OKAY to treat yourself. But grow up, stop ‘treating yourself’ every week, and slap those dollars that you clearly didn’t need into savings. I started doing this a lot later than I’d care to admit (ie: just a couple of months ago), and I already have enough money saved to cover almost two months of an emergency fund.” — Kendra

2. “Stop going to fast fashion stores and large retailers like Target. These stores are a black hole of short-lived trends, useless junk, as-seen-on-television whosawhatsis, and soon-to-be-forgotten crap that will be stuffed in the back of your closet gathering dust. (Remember those five things you bought at Forever 21 that one time? No? Neither do I.) It’s never too early to save, and for me, there’s nothing that kills a savings plan quicker than retail.” — Jessica

3. “Save! Even when your paycheck seems like barely enough to get by, commit to saving a certain percentage of your earnings. I wish I had practiced sound savings methods right after college, so that I had an emergency fund at the ready, or money saved up for larger purchases like plane tickets, furniture, and maybe a new car.” — Laura

4. “I would have told myself to stop spending money that I thought everyone else was spending. In my 20s, I had a lot of envy about people’s wardrobes, apartments, cars, etc. I often went shopping or bought home goods, because I thought I was supposed to own a certain pair of jeans, or a specific baking dish. I’ve stopped buying things because of the pressure around me, but I wish I’d learned my lesson sooner.” — Leela

5. “I wish I would have negotiated pay better! It’s a problem that is usually talked about only in professional circles, but it’s a problem for teenagers too. I was charging only $10 an hour for babysitting for years, until I found out that some of my friends (who babysat far fewer children than I did) were charging upward of $15 an hour! I was so scared to ask for a higher price when I started babysitting that I ended up getting screwed throughout high school, when that was my main source of non-parent income.” — Rachel

6. “If I could give my teenage self some advice, I would tell her to go to a CC for the first two years of college, even though all her friends would be going to university straight away. There was this ridiculous thought among most high school seniors that just because you got into a good school meant you had to go. I absolutely adored my university experience, but especially as a commuter student, the first two years I could have just as easily spent at a community college and saved myself a lot of money. But that wasn’t an option I even considered. I could have done a longer study abroad experience with that extra money, I could have just had more savings when I graduated, I could have saved it for my inevitable need for grad school; there are quite a few things that now, in hindsight, I can see would have been a better choice.” — Meghan

7. “I got a credit card when I was 18, and I wish I had waited. I was not responsible with it, and in college, I had to turn to my parents for help paying it. I really viewed it as something I could swipe any time. I would have waited until around age 22 to get one, which is when I actually started to understand credit and how credit cards work, and when I became financially independent.” — Chris

8. “I’m in university now, so when I was in high school I would have been so much better off if I had some more concrete advice about saving for school. My mindset was simple: don’t spend anything at all. Obviously, that did not work out, so I ended up having a lot of ‘yolo’ moments (because in high school people still said yolo) where I splurged a ton of money that I should have been saving. I wish someone would have taught me how to save in moderation and how to save up and budget for the things that I did want to buy, instead of just having an all or nothing attitude about it. Or thinking ‘I’m going to be in huge debt anyway, so screw it!’ All of that money that I earned waitressing through high school could have amounted to something, but unfortunately, it didn’t.” — Katie

9. “I’ve always been relatively good with saving, but the one thing I’d tell my younger self is this: create an IRA, and start investing early (even if it’s just pennies). Everything eventually adds up. I think a lot of us (like myself) are scared of the concept of investing, but it ended up only taking me a few books, a few brief phone calls, and a few hours of research to eventually decide how to invest in a way that I’m happy with, and that makes me feel more confident in my financial skills.” — Etinosa

10. “I would have forced my younger self to fully understand what signing on for loans truly means. I don’t regret my student loans, but I wish I had been more informed when making the decision to take on so much debt, and I honestly wasn’t.” — Matthew

11. “For financial advice for my younger self, I would tell my 22-year-old self that it’s okay to live at home with your parents — if they’re okay with you being there — in your early 20s. Although I had a blast living in the city on my own in my early 20s, I wish I stayed at home with my parents even one year longer, so I could have saved money. I didn’t understand the concept of ‘saving’ back then. I had no idea that when I moved out, I would be placed in an endless cycle of living paycheck to paycheck due to rent, utilities, groceries, etc. Now that I’m in my late 20s, this is probably my only regret.” — Samantha

12. “I would tell my 20-something self to set a savings goal each month, and push myself to actually meet it. In my early 20s, saving just wasn’t on my radar, and now I regret not being more proactive.” — Jake

13. “I wish I had a side hustle as a teen. My family always discouraged me from doing anything but volunteering, because they were afraid it would affect my grades, but holy shit I had so much more energy and free time then. I would advise my younger self to find some fun ways (no pressure) to make money and to SAVE IT ALL. I could splurge once in a while, you know, but I’m sure that if I had started saving then, I would have a nice lump sum now — and I would’ve gotten into the habit of managing my time, which is something that was difficult at first when I started freelancing.” — Eva

14. “One piece of advice I would give my younger self: you don’t have to only buy items that are discounted or on sale. I was in the habit of buying items because they were at a good deal and thinking they would be of use in the future. By doing so, I bought items that didn’t last. I think you need to think through every piece of clothing or item you buy, and fully understand if you really need it or not. I have been following the KonMari method and that has helped me not overbuy or hoard items.” — Neeharika

15. “I would have told my teenage self to invest the money I was saving. If you put money in an IRA as a teenager, it can do very well by the time you hit retirement, as I understand it. I wish I’d cashed in on that opportunity.” — Jeff