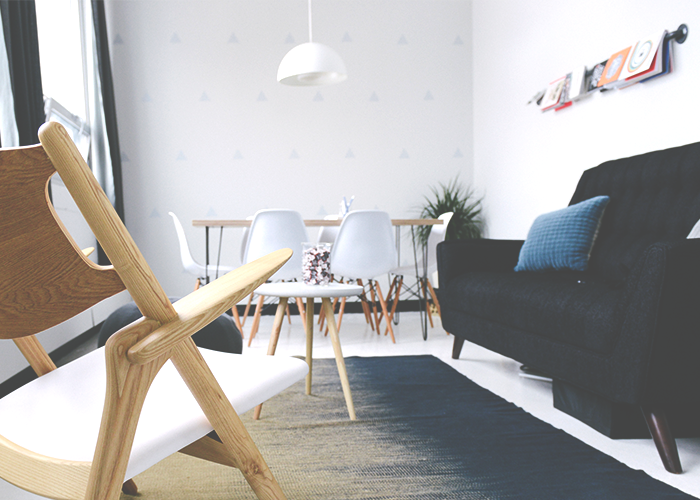 1. A microwave. I had a tiny, panic attack-inducing galley kitchen in my first apartment in L.A. (and for those of you who don’t know what a “galley kitchen” is, consider yourself lucky). We really didn’t have room for a microwave. It lived on top of the fridge, and when we moved out, my roommate took it because we’d split it to begin with. I’ve been living the microwave-free life ever since to preserve counter space, and I’m a big fan.

2. Excessive amounts of hand towels. I don’t know where they all came from, but I somehow ended up with a surplus of kitchen towels and wash cloths. All this really enabled me to do was get out of washing the ones that were dirty, because I always had a spare.

3. My bed frame. I consider L.A. my first “grown-up apartment” even though I lived on my own in upstate NY, mostly because I moved once every four months in upstate NY. When I moved into my first L.A. apartment, I wanted to treat myself to a nice bed frame (and mattress) of my very own. It was probably $450 for the mattress and bed frame, and I got it on super sale. Little did I know that I’d move six months later, and then move again eight months after that, which inevitably wore down the bed frame. Also, the room I have now is too small for my bed frame, so I had to give up and give it to my boyfriend.

4. Plastic drawers. You know those plastic sets of drawers you buy for every college dorm ever? Well, I bought some for my first apartment, which doesn’t make sense, because I had a bureau and a nice closet. It just gave me an excuse to keep dumb shit, because I had somewhere to put it.

5. About 800 wooden spoons. Growing up, we went through a lot of wooden spoons because they were the cooking utensil of choice at my mom’s house, and we stained a lot of them with turmeric. Somehow, I thought this would translate to my own adult life, and between my roommate and I, we ended up with nine wooden spoons.

6. Sentimental-value wine glasses. I worked at a Finger Lakes winery before I moved to L.A., so I used to collect the wine glasses that were given to me (or that I bought) from different wineries. However, when you live in a city apartment, there isn’t a lot of room for those, and it would have been nice to have a matching set of wine glasses.

7. Records. I was not an overwhelmingly big fan of Corinne Bailey Rae, but apparently I took the “girl, put your records on” line to heart. To be clear, I did not own a record player, just the records themselves, which is kind of like owning an ice cream maker but being lactose intolerant.

8. A fondue pot. Here is a fun fact that you deserve to know before buying a fondue pot: if you own a crock pot, then you already have a means of warming up wine, chicken broth, or milk and then melting cheese until it becomes a perfectly thick, delicious consistency. While having an official fondue pot adds a certain level of legitimacy, you can have the experience without it.

9. Those bottles of oil and reeds that you put in your bathroom. I had to Google this to find out it was called a “diffuser.” The trouble with me owning one was that it was lovely for the first couple months, and then it clearly reached the end of its diffusing life, and I just left it there for the next three months. I now own a legitimate diffuser (that you put scented oil and water in), and it is so lovely.

10. Plastic I-just-moved-in cups and bowls. I think everyone is required to take a couple of Target/Walmart trips when they move into their apartment, and my move was no exception. However, I bought these heinously black plastic cups and bowls because I had nothing to eat out of, and didn’t want to keep eating out. While this solved my immediate problem, it landed me with cheap-looking kitchen supplies, which didn’t blend with the nice kitchen set we later bought. Why didn’t I just skip step one (the black plastic bowls) and go straight to step two (the real plates)?

11. Enough hangers to fill every closet in a Hollywood mansion. I bought and owned a ridiculous amount of hangers, which I gave to someone when we moved out of that place. However, in terms of hanger-related impulse purchases that actually worked out, I bought a scarf hanger that has holes to hang individual scarves, and I honestly recommend it.

12. Office supplies. When I left my job, I took a comical amount of office supplies, because I was going freelance and certainly wasn’t going to miss my opportunity to cash in on free office supplies. As it turns out, the stack of yellow legal pads, post-it notes, felt-tip pens, etc. did not play the trivial role in launching my freelance career that I imagined it would.

13. Magnets. Lol, just no. I’m not a minimalism person, but I sincerely hope the minimalist gods forgive me for this lapse in judgment.

14. So many ottomans. At my cluttered peak, I owned four ottomans. My personal opinion is that two in one room are more than enough. I gave two away to a friend who moved to L.A. several months ago.

15. Too many toiletries. I get over excited about nice shampoos and conditioners, hair oils, body washes, etc. I always envision my ideal grown-up shower to look something like the showers they have at spas; the ones that have those adorable shampoo and conditioner dispensers. Somehow, this translated to me WAY overbuying bathroom supplies.

16. Cheese knives — and cheese paraphernalia of any kind. My impulse spending is heavily dairy-related, and my roommate at the time shared my fervor for melting cheese, pairing cheese with wine, and doing anything else we could to integrate cheese into our diet. In this apartment, we didn’t have a dining room table, and we had no storage space (which prompted me to store my suitcases in my car), but we did own cheese knives, and I later bought a wooden cutting board that I used mostly to display brie.