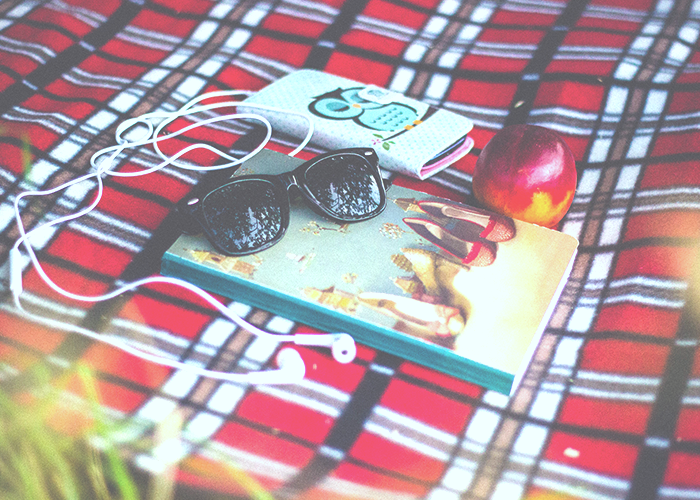 A few months ago, I was at yet another standup show in a dinky bar in an outer borough. (These are a very commonplace NYC living experience when you a) have a comedian roommate and b) like cheap entertainment.) I broke my number one rule of seeing live comedy — never sit anywhere near the stage — and found myself at a table that placed me directly under the spotlight. I was now fodder for every person that would take the stage that evening, simply because we were within two feet of one another.

Naturally, one of the first women to take the stage noticed me and decided to “work the crowd” i.e. ask me questions about what I did for a living and pick on me for her entire set. When I said I worked as a freelance writer, she said, “Oh, so you sit around and watch Netflix all day?” then proceeded to mock the yellow jacket I was wearing (my favorite). I tried my best to mask my mortification, and to her credit, I thought she was pretty funny. We hugged at the end, creating a nice tableau of forced female companionship.

I know my mortification mostly came from being the center of attention in a room full of strangers when I, you know, didn’t ask for it (other than showing up to a comedy show in the first place, I guess). But a part of it also came from the fact that she hit a nerve. My own tendencies towards procrastination and laziness are something I have to consciously fight, and at the time, the Netflix reference hit pretty close to home. When I first started freelancing, I watched four entire seasons of Veep in a week because I was spending the majority of my time sitting on my couch applying to projects. Subsequently, a lot of the work I was getting was copy editing; in those instances, putting on a streaming service was a viable option, because it didn’t take quite as much concentration as writing or more in-depth editing.

I was a longtime reader of TFD before I ever started working here, and I always appreciated Chelsea’s writing about her own laziness because I heavily identified with it. When you work as a freelancer, it is entirely up to you when you get your shit done. Rarely have I worked a freelance job or remote project with very specific hours attached to it. So if Project Runway season 4 is randomly being marathoned one day, you can decide to watch all of that in its entirety and do your work later. The thing is, with freelancing, the work doesn’t always get done later. The more you push off this one project, the more you’re pushing off subsequent projects. You could potentially be putting your entire income in jeopardy by putting off one thing now, because by putting that off, you’re also putting off the time you spend applying to new projects. Of course, once you’re more established as a freelancer, you tend to have more long-term contracts in place, and the need to constantly be looking for work isn’t as dire. But in those early months, setting time for applying is just as important as setting time to get your work done — and only one of those activities will be paying you.

My insecurity over my own laziness stems from the fact that I pride myself on being a hard worker, but sometimes my tendency to procrastinate gets the better of me. Granted, I often plan my procrastination, and it works out; if I know something is due at 9 a.m. and it’s something that won’t take more than a few hours to complete, I’ll gladly get up at 6 o’clock to do it rather than stay up late and do subpar work. But that’s because I’ve worked long enough to know that I’m much better in the morning — even Pre-Coffee Holly is better than Wants To Be In Bed Holly.

But, like everyone, I’m always looking to be a little bit better. I was so excited to come across this article from the Harvard Business Review a few months ago. The writer offers a lot of great advice on overcoming our tendencies to procrastinate, all centered on the idea that visualizing the end goal is key:

The reward for doing a pestering task needs to feel larger than the immediate pain of tackling it.

For freelancers like me, the end reward is generally being paid for completing a project. For people working at more traditional jobs, that end goal could be a commission, being able to focus on something more enjoyable, or even just the relief that this task is finally completed. There’s a lot of good advice in the article, so I suggest spending a little bit of time looking it over — in the meantime, these three pieces of productivity advice are the ones I find to be most helpful in my life.

1. “Confront the downside of inaction.”

We’re of course geared to weighing the benefits and downsides of completing a task, but how often do we think about what will happen if we don’t do it, or if we don’t do it right now? “Omission bias” prevents us from adequately evaluating how we’ll benefit from completing a task immediately rather than putting it off. For example, if I want to run a piece in two days but first need significant edits from the writer, my chance of getting those back in time decreases the longer I wait to email them with a request. But I may not think about that in the moment; I may instead think that I need to send that email eventually, but by not sending it right away, I’m jeopardizing my ability to run the piece when I want to.

Starting a daunting project is often the hardest part; it’s a lot easier to complete something once you know exactly what you’ve got ahead of you, but you can’t really know that until you’ve actually started. Many people link their tasks with some sort of rewards system to help them get over the initial anxiety of taking on something big. But before you do that, you have to acknowledge what the first step actually is. Think about what you have to get done as a series of tiny task. The smaller the first step is, the easier it’ll be to do — like sending that email to the writer. Once you’re past the initial hump, it’ll be much easier to identify what’s in front of you as you go along.

“Our brain’s reward system is so highly responsive to our social standing,” meaning we are much more likely to get something done if we’ve told other people about it. I don’t know about you, but I certainly don’t want to be perceived as lazy, and this definitely influences how and when I take action. For me, this is as easy as telling my boyfriend about a project I’ve been working on. He’s not going to ask to see my work or check in that I’m actually doing it, but in his general questions about my day, he might ask how it’s coming, which is enough to motivate me to actually do it.

No one needs to feel bad about their tendency to procrastinate. It’s a problem for the best of us, and some of the smartest people I know produce their best work when they wait until the last minute. But that’s not the same for everyone, and for myself, I know I’m happier with what I produce when I hold off on doing things. This article was a great reminder that there are so many tricks we can do to help even our most basic tendencies to procrastinate. Giving myself some tactics to combat those tendencies is just another part of being a person who works.