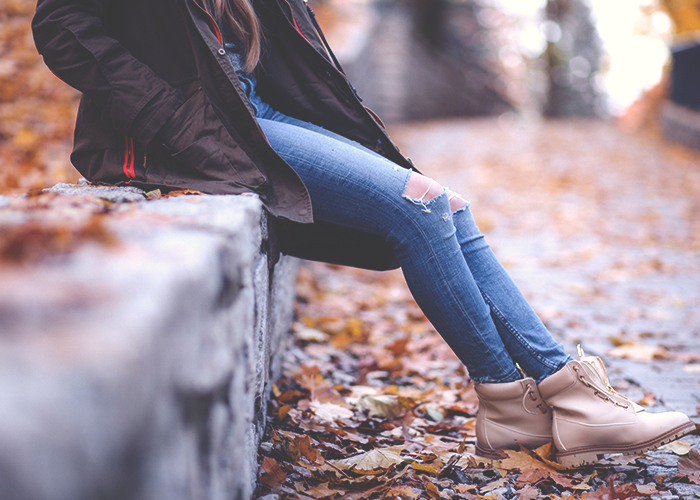 I currently have three goals set up in my Mint.com account: two for paying off balance transfer cards, and one for building up an emergency fund. Each month, I diligently call the two credit card companies I owe money to, and pay the amount I’ve budgeted in order to pay off those cards before the APR sets in. I’ve made a graphic in my planner, so I get to color in a little box each time I make a payment towards those goals. It’s gratifying every time I make a small step towards becoming debt-free and see that balance go down, and it makes me even more grateful that I never built up too big of a balance in the first place.

But saving money for me is a different story. For some reason, paying off debt is a much more tangible task to me than putting money away for myself, especially if I’m putting it into my savings account that’s through my bank. Each time I log in to look at my checking account, I see how much I have in savings right next to it. I have a terrible tendency to transfer money back over to checking whenever it’s getting low; more than once, I’ve done this so many times in a month that I’ve reached the federal limit on transfers from a savings account. Because of this, I’ve had some months where I don’t put any money into savings, as I know I’m just going to end up transferring it back, anyway.

Which brings me to my worst financial habit: Not putting money in my savings account unless it’s a “significant” amount. I’d love to be able to “set it and forget it,” but, as someone with a big part of her income coming from freelance work each month, I’m not always on a regular payment schedule, and I don’t want to risk overdrawing my account. I grew up very, very lucky. I didn’t save money when I was in college, because, even though I had a good part-time job and was earning some, I just saw it as spending money, because I wasn’t paying my way myself. So I just didn’t put any money into savings, aside from the $1.00 that was automatically transferred over each time I used my debit card. (This is actually a really good idea that I’ve had as part of my bank account since I opened it at 16, but I still fall prey to seeing the amount that adds up as easily-accessed money that’s just an extension of my checking account.)

Perhaps it boils down to that idea of “instant gratification” that we’re told time and again is so engrained in our generation. Since $1,000 is a lot more exciting to transfer into a savings account than $10 is, maybe I don’t transfer $10 over each time I’ve done something that saves me that small amount because it doesn’t seem like it’ll make a difference.

Thankfully, I’ve been taking mindful measures to get over this habit of not saving anything if I can’t save a large amount. I’ve had to learn that small steps do add up, even though I’m constantly having to remind myself of that fact. $10 saved now does not feel substantial, but multiple instances of saving $10 will continue adding up. Here are one habit I’ve adopted, and two I want to adopt, in order to get over my laziness with saving money when I don’t have a lot of it.

I downloaded this app over the summer, and promptly shared it with a lot of friends via a text message. Most of them thought I’d been hacked, and they were consequently being spammed, but no, it was me. You can read the details for how it works here, but basically, it allows you to set up an online savings account and link it to your bank account. Then, it monitors your activity — how often money gets deposited into your account, how much and how often, and how much you spend — and transfers small amounts multiple times a week, based on how much you can afford to save.

This works so well for me, because I have to do literally nothing, and I’m still saving money. I can’t “set and forget” big amounts comfortably due to my inconsistent income sources, so this is a nice alternative. And, unlike the savings account attached to my checking account, I don’t see it every time I log on to check on my banking — and therefore, I forget about it. It’s great if you’re on a freelance budget, because if you make more than usual one week, it will save more than usual! And a lot of people use apps like Digit for “rainy day” spending. I think this is a great idea, especially if you do have a regular pay and savings schedule, but want to save a little more on the side for fun things, or even just keep adding to an emergency fund.

2. Transferring Money When I Don’t Spend It

I’ve written about the bullet journal a few times now, and I have to tell you, I really love mine. I’m not the biggest to-do list person, unless I have a bunch of small tasks that I need to get done in a short amount of time. But one thing I use it for is mapping out my goals, especially now that the end of the year is approaching. I have several pages dedicated to my master apartment clean-out plan — which has helped, as I have already started tackling my dreaded side table and t-shirt drawer I haven’t touched in a year — and my plan for tackling my credit card debt. I also have a daily habit tracker, where I fill in a square on a graph each time I do something I’ve decided to keep track of, like walk 10,000 steps or spend $0 on eating out. One thing I’ve been trying to start doing is transfer money into savings for every day I eat all my food at home. Hopefully, it’ll eventually start to actually feel like I’m losing money each time I go out to eat.

I’ve thought about this one a lot lately. Instead of paying my credit card bill — the one I actively use for spending, not my balance transfer cards — once a month, what if I started paying it once a week? That way, I still get the benefit of all the points I accrue, but I’m also paying a lot more attention to my spending habits. If I’m holding myself accountable to pay it weekly (even just as a temporary measure), it’ll theoretically help curb how much I’m spending frivolously, which will then let me save small amounts more often.

I want to get to a point where I can just set up a monthly automatic savings transfer and forget about it, but I’m not there yet. And that’s okay! What’s not okay is for me to use that as an excuse to not save anything. So I’m trying to do better, one day at a time.