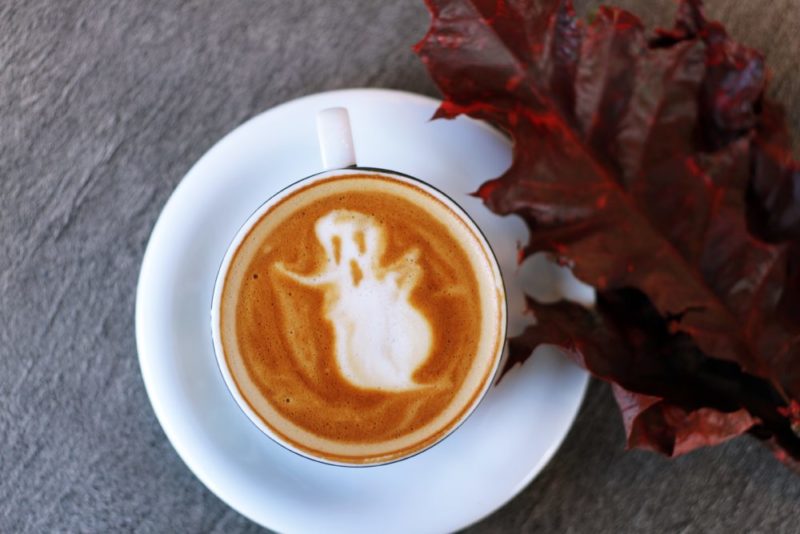 This article brought to you in partnership with Wealthsimple.

It’s Halloween, everyone! The spookiest time of year! The time to indulge in boozy, cider-based drinks, costumes you have to tediously explain to everyone at the party individually, a bowl of fun-sized candy that is more for you than for any straggling trick-or-treaters, and — my personal favorite — horror movies. I’m a huge horror movie fan, and as I won’t be in the U.S. on Halloween (the only country with enough good sense to truly celebrate it), I plan on doing a mini-marathon of my favorite scaries with a big bowl of popcorn and glass of red wine.

And in further celebration of this most wonderful holiday, we partnered up with our friends at Wealthsimple (an online investing service we love) to bring you some late 20-something tales from the crypt. Because investing is such a frightening topic for so many of us, we thought it made perfect sense to partner with them to talk about all things creepy crawly for someone nearing the border of 30 (me). Although, for the record, we are very much here to tell you that nothing could be less scary than investing once you get started, and unlike all of those finance experts who mostly want to scream at you about how you have already RUINED YOUR LIFE by not having A HUNDRED THOUSAND DOLLARS SAVED FOR RETIREMENT (but more on them later), we believe that there is no such thing as too little, or too late. And the perfect people to help you get started are Wealthsimple. Basically, you can use Wealthsimple to start investing with literally just one dollar — and they’ll build you a custom portfolio to fit your personal needs, goals, and timeline. Just answer a few simple questions about your financial goals and they’ll manage it for you on autopilot.

Think of it like the Roomba of investing — just set it, forget it, and let it go to work in the background. (They even offer retirement accounts like Roth IRAs that have huge tax benefits, and saving for retirement should be your first investment stop!) You can invest up to $15,000 with no management fees whatsoever, and TFD readers get a cash bonus for getting started (!!) Check them out at Wealthsimple.com/TFD, and remember, you can get started with literally one dollar — no excuses, and nothing to be afraid of.

But in that wonderful spirit of fear, let’s get into these 5 late 20-something horror stories!

1. You are up at 9 AM on a Saturday for a plan you made a month ago and summarily forgot about: you’re meeting a tier-3 friend for a weirdly-early brunch on the complete opposite side of town. It’s 45 degrees and raining outside, and you are snuggled up under several blankets with your laptop in reach (you could be spending the next two hours watching Netflix from the comfort of your pillow nest while it pours outside, if you didn’t have this brunch). And while you are overwhelmed with the desire to write her and say that you just can’t make it because… you are suddenly ill? Your cat is sick? You scrolled through your Facebook feed for the first time in six months and were overwhelmed with a crippling sense of alienation from your conspiracy theory-sharing relatives? You haven’t worked the lie out yet. But on some level, you know that you can’t cancel. It’s two hours before you’re supposed to meet, you have no real excuses, she’s likely already getting ready, and you just don’t have the closeness to bail openly.

And just as you are about to throw yourself out of bed with the exhausted resentment of an over-worked and under-acknowledged single mother, your phone dings. Looking to your bedside table, you can make out the name of the sender — a text from brunch friend! You are free! They are cancelling, because God has seen that you are a faithful and deserving person who should be rewarded with the miraculous 11th-hour bail.

You swipe open your phone with vigor, fingers buzzing with eagerness to type a casual “No worries! Feel better!” And just as you are ready to slide back under your covers and spend the most perfectly lazy morning you’ve had in months, you see the horrifying truth of her text: “Reservation is under Smith. Can’t wait to see you, it’s been forever! PS. They have bottomless bellinis!!”

2. Scrolling through Twitter from your desk at 3 PM on a Tuesday, you are accosted by a Tweet which throws your entire existence to this moment into question: Some well-meaning but tone-deaf money reporter you’ve never heard of (she has a dreary, LinkedIn-esque profile picture in which she is wearing a blazer with shoulder pads, two undeniable symbols of financial expertise) has shared her latest piece of Tough Love. The bottom line is that, according to her, millennials (noted murderers of everything from casual dining chains to fabric softener to loveless marriages of social obligation) need to have their annual salary’s worth of retirement saved by the age of 30.

And the underlying implication is, of course, that you, a dirty, lazy millennial who has not accomplished this, deserve only a life of endless toil and suffering from the discomfort of an efficiency apartment illuminated by a single light bulb hanging spookily from the living room ceiling. That is, unless you decide this very second to repent for your sinful, avocado toast-coveting ways and spend your 30s in a perpetual state of self-denial, eschewing indulgences like makeup, restaurants, and meaningful human relationships in order to maximize your savings each month. In the world of Serious Personal Finance People With Blazers, there are only two paths: the path of the righteous millennial who makes every correct decision on the first try and blogs about how they save money by weaving their own sweaters from the hair they fish out of their shower drains, and the path of the hedonist millennial who prefers luxuries like nut milk and paying down student loans to the proper path of savings. And you know deep down exactly the path you have chosen.

3. Your friend is going through a breakup — one of those devastating, literally-everything-reminds-them-of-their-ex breakups where they can’t even turn on the TV because they might see a commercial for Febreze and remember that one time that their ex threw up in the back of their car and no amount of Febreze would get the smell out, so then the car just smelled like vomit and Febreze, and somehow that memory seems romantic in their unhinged state, and they will start uncontrollably sobbing again. They’re at that place. And, because you are a very good friend, you stay in that place with them.

You head to her apartment night after night, downing progressively-crappier wine (wine is expensive!!) and watching movies that alternatively make her weep with sorrow and weep with nostalgic joy (or, frankly, sometimes both). You listen to her rant about all of the terrible things he did, how cold and pretentious he could be, how she lived in permanent fear of, and exhaustion with, his judgment. Yes, you agreed, he was such a tool! (And he really was, it wasn’t just you being nice and indulging her.) You tell her that you never liked him to begin with, that you always thought she could do better, that you called him “Febreze Guy” in your head not because of the throw-up incident but rather because he often Febrezed his jeans rather than washing them frequently enough. You put your cards on the table: the ex is bad, you are so glad he’s gone, you have a small library’s worth of grievances to stack on the table against him. Finally, you are both free of Judgmental Febreze Man!

And then one morning, as you are brushing your teeth in the shower because you are yet again late for work, you hear your phone go off. A call from breakup friend — not an unusual occurrence. Toweling dry, you tap the speakerphone button because she is very much in the grace period of “having all her calls answered no matter what, no matter when” of grieving.

“Hey!” she chirps, her voice suspiciously joyful for it being a) 7:45 in the morning and b) a supposedly-devastating time in her life. “I have the best news! We got back together!!”

4. It’s Friday night, and you are doing something you haven’t dared do for the past two years at least: you are going to a concert at a hip downtown club. You’re there to see an artist who was hugely popular when you were in high school, an era which is beginning to appear on “classic” playlists, which seems just chronologically nonsensical. And while you used to be a certified “scene kid,” complete with misguided eyeliner and even more questionable bangs, it has been years since you’ve braved the crowds and shown up to a “venue” to see a “show.” But this is totally suited to you! There are seats, and a bar that serves wine, and the concert starts at a sufficiently-early hour to grant you a solid night’s sleep.

You dress up in your most concert-appropriate attire that doesn’t make you feel deeply sad (this translates to a somewhat-short black dress, black tights, and black boots, with 20% more eyeliner than you’d usually put on). You meet up with your friend at the train station outside the club, and the two of you sip a bit of whiskey from the flask she brought in her purse (look at you rebels!). The two of you enter, head to the bar, grab two large wines in plastic cups, and move towards the stage where you find, to your absolute horror…. There are no chairs. The chairs were a myth, a false promise from outdated Yelp photos. There is only a squirming, steamy pit of mostly-younger-than-you people, and somehow the tallest among them insist on standing directly in front of you (when they are not busy stepping on your modestly-heeled boots with their huge and dirty sneakers). The band is not playing any of your favorite songs because they are “trying out some new stuff,” and several couples around you insist on “grinding,” despite this music being more appropriate for activities such as smoking stolen cigarettes in a public park and telling your parents you hate them. You look around and in personal-space-less terror, realize that you are indeed The Old At The Show. You are no longer one of the cool, nameless Youths of the pit, you are just the person who is sipping a plastic cup of wine at the too-loud show, thinking about ducking out early so you can beat the rush and maybe send one or two important emails before bed.

Don’t wake up in ten years to the ~chilling realization~ that you could have WAY more money if you’d invested! Start your portfolio today at wealthsimple.com/TFD and get a special bonus of $50 off your first $500.