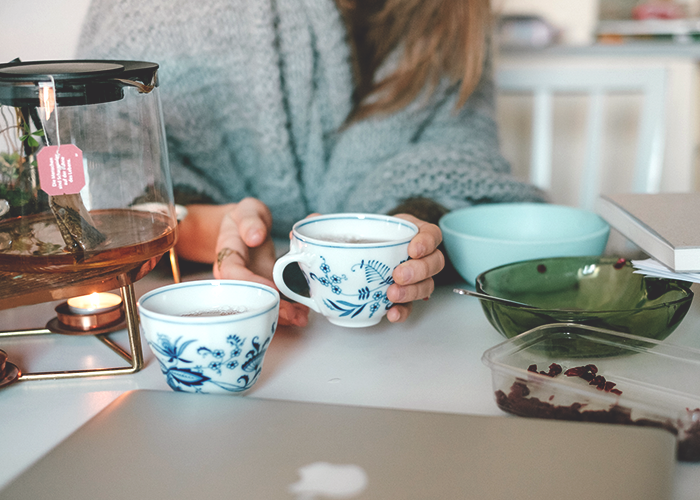 We are now 18 whole days into the New Year. Spending that time chasing ambitious goals of self-improvement seems to be a shared American pastime. We spend the first few weeks of the year meal prepping, slogging through five miles on the treadmill, and counting every penny in our budget — only to have a shoe sale or tray of cookies derail our efforts, triggering a downward spiral where we totally abandon our goals in favor of settling back into the comfort of our bad habits.

If you’re like the majority of Americans, you’re still optimistically clinging to a list of resolutions that most likely includes some combination of losing weight, eating healthier, better managing your money, quitting smoking, or some other self-improvement related goal. We hate to break it to you (although it probably comes as no surprise), but the odds are stacked against you that you’ll be able to check any of those off the list come December 31.

While 41 percent of Americans make some sort of resolution around the New Year, a little over half are still maintaining their resolutions by February, and a measly 9.2 percent feel they are successful at actually accomplishing them. But we’re not saying to nix the resolutions altogether. Research shows that people who explicitly make resolutions are 10 times more likely to attain their goals than people who don’t make them.

What we are saying is that some edits need to be made to the ones you have saved in a note on your phone.

“Grandiose goals beget resignation and early failure,” said Dr. John Norcross, a clinical psychologist and professor of psychology at the University of Scranton, in an interview with NPR.

We get it. It’s a fresh year, and you’ve got some big plans: Lose 30 pounds. Go vegan. Workout everyday. Start your own business.

Kudos on the ambition, but while you may want to reach goals of that magnitude by the time you ring in 2018, science shows that you’ll up the likelihood of that actually happening by setting smaller, more manageable goals. British psychologist Richard Wiseman tracked the success of 3,000 people’s New Year’s resolutions, and found that a commonality among the mere 10 percent who actually accomplished them was that they broke their goal into a series of smaller steps. You don’t need to abandon “losing weight.” Simply break it up into smaller milestones to ensure your success. “Lose 5 pounds by February 12” is a much more concrete goal to aim for.

“A resolution to lose some weight is not that easy to follow,” said Roy Baumeister, a social psychologist. “It is much easier to follow a plan that says ‘no’ potato chips, fries, or ice cream for six weeks.”

Instead of “I’m going to start going to the gym” in 2017, set the goal of signing up for a weekly boxing

class, or going for a jog every Monday and Wednesday. Instead of “I’m going to network more” in 2017, set the goal of reaching out to 5 new people each month who can possibly help you in your career. Being more specific will ensure your goal is measurable and your progress trackable — a key component in successful resolutions.

3. Think Outside The Box

Most of us tend to default to the popular ambitions: dieting, quitting smoking, making more money. But new data released by the Royal Society of Public Health in the U.K. found that the most successful resolutions in 2016 were among people who had chosen to improve relationships with friends and family, followed by shaping a healthier work-life balance.

More than 80% of people who resolved to improve relationships reported doing so by the end of January, with 58% having stuck with it to the end of the year. A better work-life balance came in second, with 75% keeping this resolution for one month and 43% still feeling they were doing this at the end of the year, reported CNN.

“The most difficult resolutions to keep were the consumptive, addictive behaviors, such as smoking and dieting,” said John Norcross, professor of psychology at the University of Scranton and author of the book Changeology. “The easiest ones are the realistic, attainable resolutions that can be accomplished permanently in the first three or four weeks,” he said.

Consider mixing things up this year and choosing a few easily attainable goals that encourage you to implement real change now.

4. Include A “Setback” Plan

When implementing new habits, it’s inevitable that you’re going to slip up and give in to temptations. Preparing for those instances ahead of time will prevent you from feeling like you’ve “fallen off the wagon,” which ups the chances that you’ll throw in the towel altogether.

Before you set out after success, think about the potential barriers that might get in the way, Tim Bono, assistant dean and lecturer on psychological and brain science at Washington University in St. Louis, told FastCompany. “You might get lazy, tired, forget, or lured away by another temptation,” he said. “Then identify contingency plans for how you will respond in those moments.”

“The successful resolvers slipped just as much in early January as the unsuccessful resolvers. But they discovered that a slip, a momentary lapse in a resolution, need not be a fall. They picked themselves up and they recommitted themselves to the resolution after a slip,” he explained. “For example, 71 percent of our successful resolvers said their first slip had actually strengthened their efforts. So this is really encouraging news to everybody. Early slips may be a sign that you just need to refine your action plan, get back up and do something.”

While you’re revising, you may want to make sure those resolutions are jotted down in pencil. Ready to be revisited, refined and set back in motion.