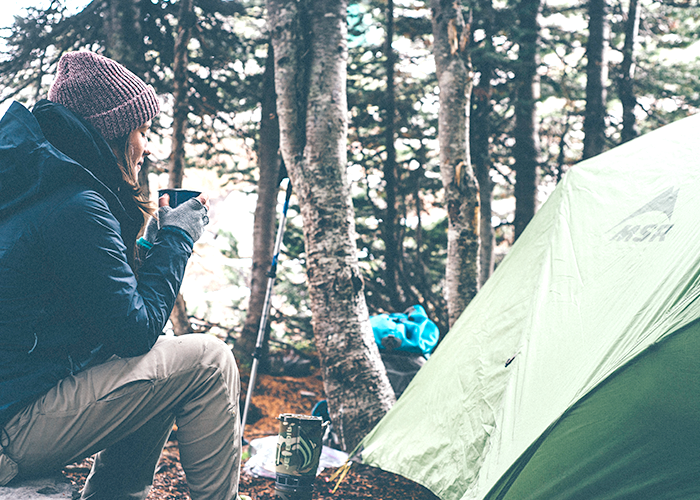 One of the ideas that’s been hardest to accept in my journey to become totally in-control of my spending is that there is no one item I can buy that will make me a different person. On some level, it’s easy to blame global media and advertising for my subconscious perception as a woman that this lipstick or that blazer will transform who I am, but I know that it’s more than that. I’m someone who has always had an extremely difficult time managing my impulse spending — especially when it’s directly driven by my anxiety — and I know that my own battle with thinking I can spend myself into a person I like more is mostly in my head. Yes, I am a victim of a society that pretends women can put on another persona like a themed Barbie, but I am also someone who is soothed and reassured by spending money.

I think that part of this is growing up financially-insecure, and then living in a town with a very high median income: it was always natural for me to feel like confidence was something I could buy, or that I was just a certain amount of money away from being a person I idolized. So much of our social status as kids and teenagers is dictated by the labels we wear, the places we can afford to go, the luxurious extra-curricular activities we can participate in. And we reward people for having had the ability to do things: on some level, we know that a prestigious university education is a financial privilege, but we usually speak of it in terms of meritocracy. We know that traveling is something that nearly anyone can experience if they afford it, yet we still attach undue moral significance to having been to other countries. We know that many of the things we can choose to do or experience that make us “interesting” are unattainable to much of the country, but we still believe they will transform us.

And this trickles all the way down to buying that one perfect work bag which, despite the fact that the worst employee in the office could have it if they had enough money to buy it, we imagine will imbue us with more Professional Woman Savvy. I fall victim to this all the time, and battle myself constantly over my inability to distinguish something I want and something I trick myself into believing I “need.”

What’s more dangerous, though, is when I manage to convince myself that there is an entire person I could become if I simply owned the right supplies and/or collected the right experiences. At different times and for different reasons, there were specific women I had in my head that I strongly wanted to be (whether this was to impress a guy or get a career I wanted), and I wasted incalculable amounts of money trying to become her. Looking back, I can see each of these eras with a cringeworthy clarity, and all I can think is how much happier I would have been if I’d accepted that I didn’t actually want to be these women at all, and that anyone I stood a chance of becoming, I wouldn’t have had to make a concerted effort to purchase.

So, without further ado, the four specific women I wasted money trying to become.

The aforementioned hometown with the high median income was Annapolis, Maryland. Although I was a relatively normal middle-class teen by the time I lived there, I was inadvertently surrounded with the kind of wealth that, looking back, forever distorted my view of what was normal. More people than not around me had BMWs and boats and k-12 educations that cost more than many universities, lived lives free of things like student debt or work-study or having to scrimp and save for extended periods to buy something. And while, as an adult, I can look back and feel truly grateful that I did not grow up with a lot of luxury — I believe that my personal drive and hunger stems largely from the fact that I’ve had to be scrappy — I can also be honest about how much it impacted me at the time.

When I was living in Annapolis, and the overwhelming manifestation of wealth was WASPy, sailing-town preppyness, I all but hemorrhaged money in an effort to imitate it. While I was working at the Yacht Club, for example, I would routinely blow entire paychecks on Lilly Pulitzer dresses and Sperrys

and J. Crew tortoiseshell headbands, and many other superficial elements of preppy culture I couldn’t afford. Looking back, not only was this an enormous aesthetic mis-investment — literally none of the things I bought, especially those several-hundred-dollar cotton shift dresses with crabs on them, are something I would wear again — it also was a totally backwards attempt to buy into preppy culture. I would never be preppy: I don’t come from WASPs, I don’t have a college degree (let alone an elite education), I don’t have a sailboat or a waterfront cape cod or a roman numeral-ed boyfriend or any of the other core elements of that culture. (I also have no desire to belong to country and/or yacht clubs, particularly after working for one, but that is a whole can of worms I will not open in this post). I’ll never be Old Money, and I’ll likely never be New Money, either. And no amount of crustacean-motif clothing would change that.

When I was first starting out with internships during college, I became overwhelmed with this (perhaps not totally-unfounded) fear that, because I was going to a community college and didn’t have a ton of experience in anything, I had to go way overboard to overcompensate and convince people that I was a Professional. I was going between DC and Annapolis on a daily basis at this time, and would often find myself pulling over at some business casual store or another to stock up on blazers, slacks that made me look both weirdly long and stumpy, and enamel-based jewelry that I thought at the time was synonymous with “serious working woman.” I truly thought, and it’s the impulse I fight most to this day, that being professional is something you wear. And while I will grant that there is a basic, foundational office wardrobe that most people will have to invest in at some point, there is also a clear difference between “going on a splurge at Banana Republic because I have some vague professional commitment in the near future” and “planning ahead for a yearly investment-shop in some staples I need for work.” I often tended towards the former, and though I can still slip up with that from time to time, at no time was it more of a downward spiral into a pile of blazers than during that highly-insecure internship year.

Anyone who knows me most likely let out a hearty LOL when they read this point because, lol, I am the absolute antithesis of outdoorsy. There is not enough money in the world to get me to voluntarily camp again, and there is no natural glory I’d ever prefer to see over discovering a new city. I am, and always have been, an urban explorer, and could walk 10 hours straight through urban streets, yet will start complaining at approximately minute six of any hike. That’s just me, and I in no way mean to denigrate people who prefer the great outdoors: live your life and enjoy it, I will just not be there, no matter how many campfire s’mores are on offer. (Unless we’re roasting them over the fire next to the jacuzzi at our chic lodge we found on AirBnb.)

Point being, I am laughably not an outdoorsy person, yet for a brief time that I was dating a guy who very much was, I spent untold amounts of money trying to become one. On our way to visit his family in their mountain summer home, I maxed out my credit card (the one I ended up defaulting on and tanking my credit with) to buy Lacoste polo shirts, expensive hiking shoes and cargo shorts, and other adorable preppy-outdoorsy accoutrements. (Bear in mind, I was trying to be outdoorsy but still obsessed with WASPiness, which his family very much was — hence, the pastel polo shirts, in which I feebly played a few rounds of tennis.) After that trip, we broke up, and I never touched any of those items again.

When I first moved to Paris, I made the crucial error of picking up my then-host mother’s copy of La Parisienne — a guide to Parisian chic, essentially — and devouring it. I didn’t know that said host mother (who is now a very good girlfriend) mostly laughed at it and considered it unattainable, and I took it as gospel. Everything from my red hair, to my still-heavily-pastel wardrobe, to the words I learned to say in an easily-mocked Quebecker accent felt lame and un-chic. I wanted to become Parisian at any cost, and that meant going to fast fashion stores and buying cheap, shitty, ill-fitting versions of the “so typically French” clothes I devoured in that book. I bought them despite functioning on a razor-thin stipend, which often meant entire weeks eating ramen or not buying crucial schoolbooks so that I could get a crappy Breton-striped shirt that would be filled with holes within a few washes.

Thankfully, as I settled into my life there and realized just how utterly obnoxious and unattainable (and vaguely racist) the entire “How To Be A Parisian” genre is, I abandoned this quest to transform myself into a character I’d imagined in my head. I started wearing and being and buying what I wanted, and found that the relationships I formed and the life I lived there were a thousand times more rewarding as soon as I stopped spending money on this Other Chelsea. I may not have been as chic, but I was damn sure a lot more happy.