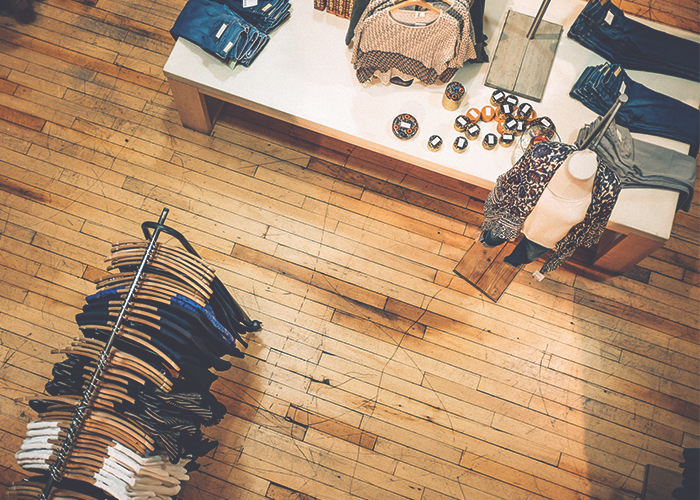 I’m someone who — as many of you already know — has a seriously-checkered past with money. For many years, I was aggressively bad with money, primarily because a combination of anxiety-and-insecurity-driven spending and chronic laziness manifested in defaulted credit cards, unpaid bills, and avoided deadlines. Aside from a serious hit to my self-esteem (it’s hard to feel truly confident if you know you’re incapable of even paying a simple bill on time), my former habits manifested in one big thing: a laughably-bad credit score that took years (and counting) to successfully rebuild.

I’ve written many times on TFD about my shame and embarrassment around my formerly-decimated credit, and how taking control of it was the first and most important step to becoming truly confident: the day I finally paid off my defaulted credit card was one of the proudest days of my life, no joke. And in running TFD, and reading so many stories every day about other people who with similar experiences, I realize that to have ever had shame in the first place was a bit misplaced. Making mistakes with money, especially in a society that doesn’t offer many tools to help, yet plenty of opportunities to screw up, is almost inevitable. We are not defined by the things we do wrong, but rather by how committed we are to getting out of our own way, and making decisions with Future Us in mind. When I was busy ruining my credit and living my life like I was going to die at 25, I wish I’d known there were ways to take charge of things, even with a less-than-perfect profile.

One of the programs that would have helped me the most is Self Lender, a service that helps people save money, while building credit safely. I wish I could go back to that version of me and use Self Lender and saved years of financial mess. But in the absence of this foresight, TFD partnered with Self Lender to bring you stories of financial mistakes and how to defeat them.

We’re starting with the habits that made me ruin my credit, and the habits I now have that allow me to rebuild it.

One of the biggest ways you get into serious financial trouble is by totally ignoring it — when you bury your head in the sand and don’t check account balances, look through statements, or check your credit score, you are bound to miss tons of important things. Everything from bill deadlines to false purchases (one time it took me six months to notice a fraudulent $470 charge on my debit card, YIKES) are likely to slip out of your hands if you don’t track your money. And this leads to bad credit, among many other things. Remaining ignorant to your financial health is comforting, but only in the extremely short term.

Another habit that tends to snowball (like not checking your accounts because you’re afraid of what you’ll see) is spending freakouts. I used to have these moments that started much like binge eating — hence The Financial Diet, heh heh — wherein I would make one dumb purchase because I was stressed or anxious, and then say “well eff it, I’ve already messed up, time to spend whatever I want.” I’d go into a mall in a fugue state and come out with $600 I couldn’t afford on my credit card, on a semi-regular basis.

The foundational element of my bad spending, I now understand, was my anxiety. Anxiety disorder combined with insecurity (only compounded by my massacred finances) meant that spending became a way to temporarily soothe myself and make me feel like I was buying things to become a person I liked more. Not treating the core issue meant I ruined my credit over a series of crappy clothes and home goods that acted as a substitute for actual self-care.

4. Ignoring my Future Self.

The fact that, between the ages of 14 and 22, I worked at least one job continuously, attended a community college, and mostly lived at home, and yet came out with precisely zero dollars in savings meant one thing: I didn’t care about Future Chelsea. Frankly, I’m fairly certain I didn’t even think she would exist. Having a dedicated savings program (like Self Lender) might have been the kick in the ass I needed to realize that I would exist past the next few months and want some security, but at the time, I was incapable of understanding that.

A weird counterbalance to my dangerously YOLO financial life was this other weird perception that there was definitely a Future Chelsea, but that she was fabulously wealthy and in control of her money, despite me having absolutely no plan to getting there. My habits oscillated between “I’m going to disappear tomorrow” and “I’m going to be a rich baroness in 10 years,” and I have no idea why, but it always meant that I could justify nearly any purchase by some imagined future money I’d have to pay it back.

The first thing I accepted was that there is no such thing as “good for it,” and spending within what I have isn’t some “frugal” lifestyle, it’s the only sane way to live. That means saving the vast majority of any big checks I get (even things like tax refunds), asking for help from people like my partner to properly allocate my money, and avoiding triggers, such as neighborhoods like SoHo here in New York, which makes me suddenly feel like I’m some chic lifestyle blogger who can afford anything. Learning to not only live the life I can afford, but to also pre-empt my worst habits, was the best change I’ve made thus far. Now, saving money is a full-on sport in many ways, and I find that watching the number tick up in an account does more for my anxiety than any random purchase ever could — because I’m actually doing something to give myself long-term security.

And coupled with my approach to savings and asking for help, radical honesty about my money situation has done wonders for my former cycle of ‘be-ashamed-about-money-spend-to-overcompensate.’ I have found that it’s nearly impossible to feel shame, insecurity, or low self-esteem when you are completely, totally honest, and own the things that once scared you. Hell yea, I was bad with money! Hell yea, I ruined my credit and am still rebuilding it! Hell yea, I have anxiety disorder! When I know and love exactly who I am, no one — not even a credit bureau — can scare me.

Lastly, and this should go without saying at this point, actually treating my anxiety, seeing a doctor, and getting to the roots of my weirdness with money has been essential. Reckless and self-destructive spending is almost never a cause, it’s a symptom. And treating the cause is pulling a weed up by its roots, rather than constantly trimming and wondering why your emotional weed keeps growing back.

4. Planning out my purchases.

If you know that, like me, spending spirals on stuff you don’t need to make yourself feel better is a big Achilles’ heel, get ahead of yourself. Start planning out your purchases — your wardrobe, your home furnishings, even your food — so that you can’t just wander into stores and do serious damage. I have become a devotee of the shopping Excel spreadsheet, and it’s meant that I have gone from a chronic overspender to someone who buys intelligently, and only what they actually need.

5. Spending far less than I can.

Most importantly, and this is huge for the act of building credit, spending way below my means (and my credit line) has been the biggest active financial change. I used to look at my credit limit as some kind of high score I needed to reach, and now I know the huge credit-building benefits of staying way under your credit limit each month. Now, I spend within my budget, not the sky-high limits I could spend to, and it doesn’t feel like I’m missing out: it feels like I’m actually doing something good for myself.

No matter what your financial mistakes, you don’t have to be defined by them, or live in their shadow. You can take control of yourself, and change the very habits that got you into trouble in the first place. Few people could have been more financially-chaotic than me, and look at me now! *Dances in a tuxedo while holding a screenshot of my improved credit score and bank statements.*

Self Lender is simple: they give you a small loan held in an FDIC-insured CD account, which you pay back in 12 equal payments over the course of a year. In that time, your loan sits safely in the account, your on-time payments are reported to credit bureaus each month, and you receive the money at the end of the year (after it has accrued some nice interest, too!). It’s entirely online, requires no credit check, and is free to join. There are three account options for different needs, but each helps you build credit in a way that saves money and saves you from yourself.