5 Reasons Why The "Lazy Millennial" Stereotype Is Bullshit 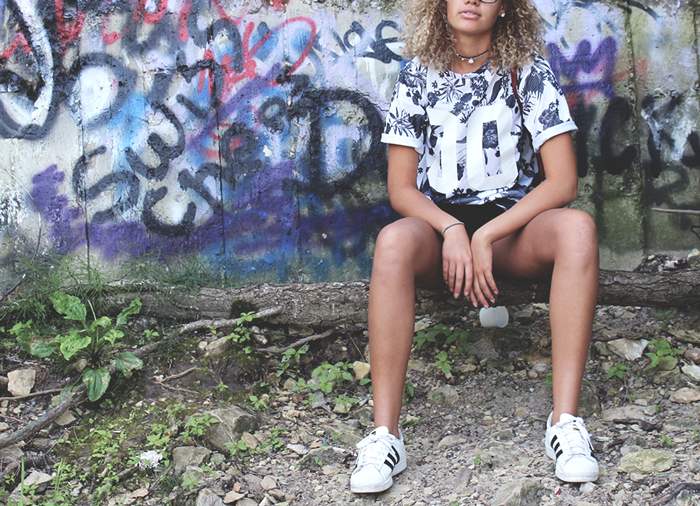 Lazy, entitled, freeloading, whiny, safe-space-inhabiting, impatient, thin-skinned, don’t-know-the-meaning-of-a-hard-day’s-work, precious snowflakes. Millennials. My generation.
Or, if you’re Time Magazine, “The Me Me Me Generation.” This is but one example of the current favorite editorial of the lazy middle-aged journalist, in which they trash millennials for everything they’re anecdotally doing wrong with very little empirical evidence about what’s actually going on in their lives. Writing indignant think pieces about how awful the young people are these days has been in style since Socrates was pioneering toga-style in the amphitheaters of Athens. But this style of editorializing still pisses me off.
I’m tired of it. For one thing, the entire concept of “generations” is bullshit (as perfectly explained by Adam Ruins Everything). For another, the Millennial stereotype is pure, unfiltered cockamamie. So setting aside for a moment the fact that generations are a nebulous concept devoid of meaning and that the popular stereotype of millennials is false, I’d like to take this moment to explain a thing at you.
I’m proud to be a millennial. And here’s why.
1. The most educated generation
For the purposes of this article, I’m defining millennials as North Americans currently between the ages of 18 and 34.
The Pew Research Center says millennials are on track to be the most educated generation ever. What this means is that people in this generation are graduating from high school and attending college at rates that exponentially outpace previous generations.
Of course, that also means they’re graduating with their college degrees and an average of $35,000 in student loan debt. But let’s keep focusing on the positive, shall we? Like how having an education reduces poverty, raises income, makes people healthier, and of course, gives one the ability to pretentiously quote Kierkegaard in social situations at a moment’s notice.

To be fair, part of this statistic is due to the fact that women, immigrants, and people of color in the United States currently have more opportunities for educational advancement than at any time previous in American history. It’s hard to be the most educated generation when it’s 1950 and you’re suppressing half your generation’s access to an education. Which leads me to…
2. The most socially progressive generation
The generation that has been at the forefront of the Black Lives Matter movement and seen marriage equality become the law of the land is far more comfortable with social justice than previous generations. Which, as far as this millennial is concerned, is something to be very, very proud of.
Millennials are overall more progressive than older generations. This doesn’t just cover political party affiliation (though 57% of millennials lean Democrat according to the Pew Research Center). A Center for Information and Research on Civic Learning and Engagement (CIRCLE) report reveals that millennials are starting their adult lives more progressive than any generation since 1960. For while most people lean more conservative as they age, millennials are beginning to formulate their socio-political opinions farther to the left than their predecessors. Which ultimately could mean that they will trend less conservative as they get older. 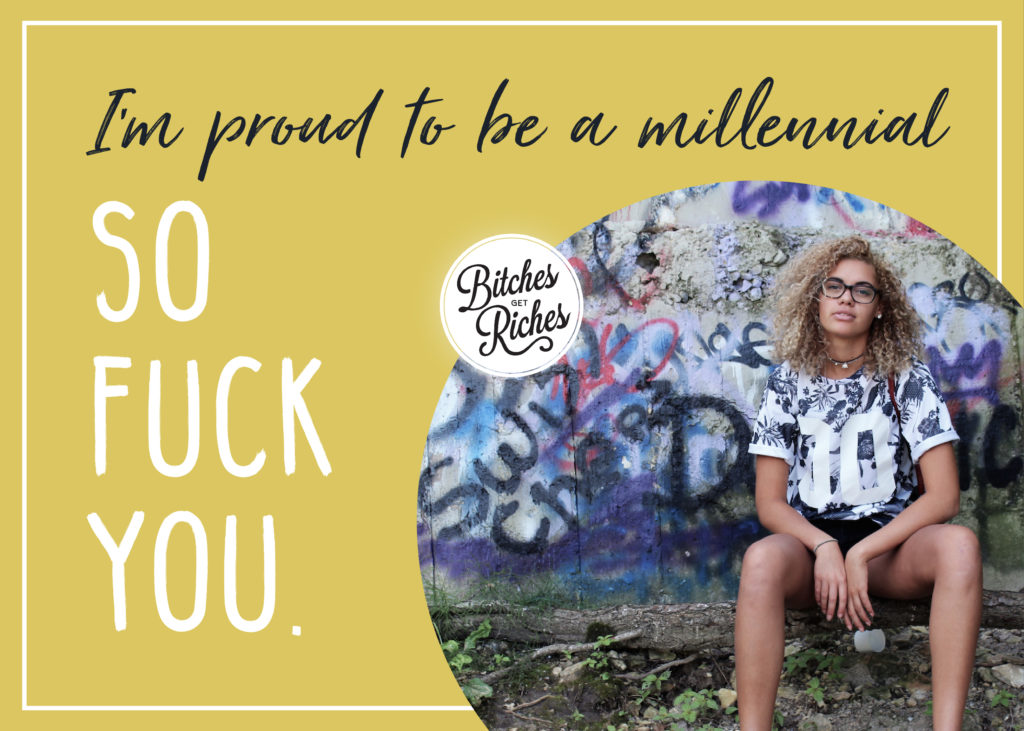 That same CIRCLE report states that millennials are more progressive on economic issues, more committed to community service, more tolerant of demographic diversity, more comfortable with homosexuality, more welcoming of immigrants, more supportive of civil liberties like free speech, and more liberal about gender roles.
I’m optimistic enough to believe that even the most anxious conservative pearl-clutchers can’t think that’s all bad.
But this also means that, politically speaking, millennials are more pro-government than their elders and they have a more favorable view of socialism. So, maybe start clutching those pearls, old conservatives?
3. The most productive generation
Millennials currently make up the majority of the tax-paying workforce in America. So suck on that, cranky old fart starting letters to the editor of his small town newspaper with “As a taxpayer…”
But not only are we highly represented among the worker bees, we’re also the busiest bees in the hive. For according to the Harvard Business Review, millennials across the board are total workaholics. In fact, because of a number of factors, millennials could be poised to be the most productive generation ever. It completely flies in the face of the stereotype, but there it is.
With all this work we millennials are doing, you’d think we’d be painting our fixies

with gold leaf and sprinkling our Unicorn Frappuccinos with diamond dust. Not so: despite this unparalleled work ethic, millennials are vastly underpaid. Which just makes the whole “entitled” stereotype that much more infuriating.
Anecdotally speaking, I find this statistic completely believable. Almost all of my peers pull long hours at their day jobs and freelance on the side. When we can get together to commiserate, it’s like the Overworked Olympics: comparing stories to see who’s more stressed, who’s got more on their plate, who’s sacrificing more vacation time, who’s working themselves into a coffee-and-adrenalin-induced brain aneurism faster.
Millennials work hard! I know I do, says the girl writing this blog post on a Sunday after spending most of my afternoon freelance editing for a Gen X client before I head to my day job working for a Baby Boomer tomorrow. I DARE YOU TO CALL ME LAZY.

4. The generation that is fighting your goddamn wars
That’s right. I went there. 71.8% of our country’s active duty military members are Millennials. And those millennials are doing the most dangerous jobs in the military: they’re the deployed, on-the-ground, front-line enlisted soldiers and marines and low-ranking officers and non-commissioned officers. They’re the ones following the orders of higher-ranking older officers sitting in locations of relative safety. They’re working hard. They’re risking their lives. And they’re millennials.
So you can either be all “Millennials are lazy and entitled and they don’t know the meaning of sacrifice” or you can #supportthetroops. Pick one. You can’t have both.
5. And we’re doing all this under overwhelming circumstances
The crash of 2008 and the recession that followed defined the economic circumstances of my generation. We had nothing to do with creating these circumstances, and yet we disproportionately suffered because of them.
Because of the 2008 crash, millennials may never make as much money as previous generations, according to Bloomberg. Employers are more cautious about hiring and offering competitive paychecks, and that will affect millennials for the rest of their careers. And those millennials who could find a job after the crash are way more likely to cling to that low-paying position for fear of being unemployed again. Watching the housing market and stock market completely implode and betray normal investors has bred a deep-seated distrust of these institutions, which has made millennials worse investors.
Then there’s the student loan debt crisis, a $1.3 trillion burden on our generation that nobody in government seems particularly motivated to alleviate. Our youngest working generation is starting their professional lives deeply in debt, with a staggering negative net worth. Combine that with the whole underpaid issue, and it’s no wonder that millennials are delaying typical adulthood milestones like getting married, buying houses, and having babies.
And yet even in the face of these depressing odds, millennials are doing all of the above. Statistically speaking, we’re kicking ass and taking names and being thoughtful and compassionate while we’re at it. And as far as I’m concerned, that’s something to be damn proud of.
(I’m Proud to Be an American got stuck in my head while writing this article and now I’m at least halfway to insanity.)
Kitty and Piggy are head bitches in charge of Bitches Get Riches, a blog about finance, feminism, and fresh af RuPaul gifs. Sometimes they write about guinea pigs and video games. You can follow them on Twitter and Tumblr.