5 Rules For Personal Spending I Learned From Watching Queer Eye 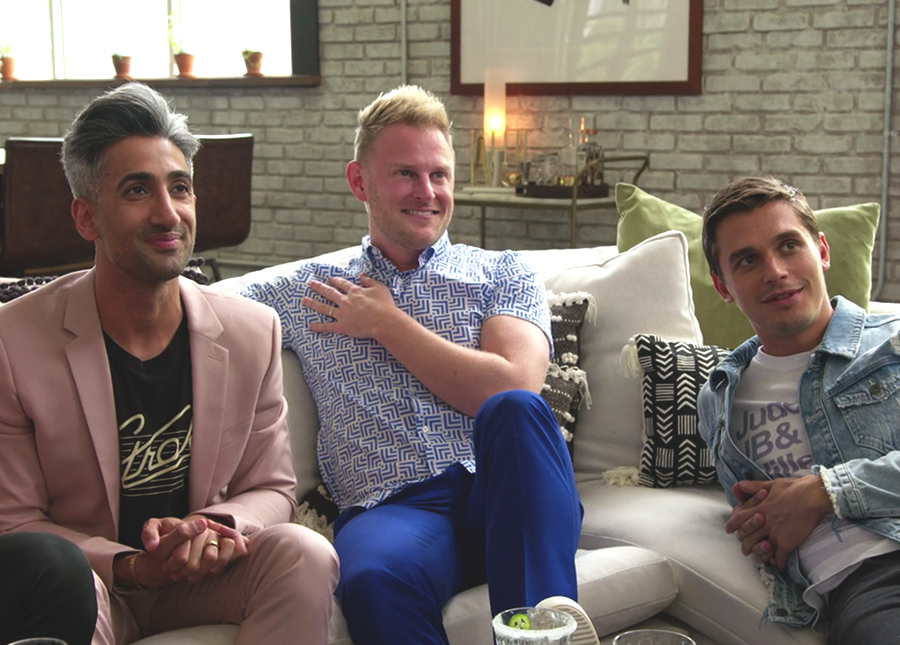 If you missed all my tweets a few weekends ago, I fell headfirst into a binge-watch of Netflix’s reboot of Queer Eye. I’m not ashamed to say I watched the entire season in a single day, and my only regret is that I have no more episodes to watch. And of course, as someone who writes about money, I had a Lot Of Thoughts — but you might be surprised that they’re literally 100% positive.
If you haven’t seen either iteration of the show, and you don’t have an hour to check out one of the episodes before reading this post (which I accept as long as you promise to watch one sometime today when you have more time), here’s the basic concept. Five gay guys, each an expert in a different area, perform a one-week makeover on a guy whose friends or family nominated him as someone who really, really needs one. The makeovers were amazing and varied, from a single comedian who lost a ton of weight, to a married firefighter who wanted to step his style game up for his wife and a fundraiser for the firehouse. I guarantee you that this is the most positive, beautiful show you could possibly watch right now — and you should probably not watch episode 4 without some serious waterproof mascara, or right before you need to look like you haven’t been bawling your eyes out.
And if it doesn’t sound like money is the focus of the show, that’s because it’s not. But there are some really key things that are presented as positive lessons in the show that I think are worth mentioning.
1. Spending money on yourself isn’t frivolous
There were a lot of reasons the guys being made over gave for not spending money on their clothing or their grooming routines. They’re not confident, they don’t think nice clothes will fit them, they’d prefer to spend the money on their families, you get the idea. I really get it, because for a long time, spending money on clothing was pretty low on my priorities list, and I didn’t think it was worth investing in. But over the past few months, especially as someone who works from home, I’ve realized that spending a bit of money on clothing that makes me feel like a Real Adult is a huge boost to both my productivity and my confidence.

And while women are far more likely to be shamed for their personal spending, it’s clear that feeling guilty about spending money on yourself isn’t a sex-specific phenomenon. It’s also clear that the benefits, as experienced by the guys on the show, can be pretty massive. Seriously — I won’t spoil any of the endings, but watching the transformation that some solid basics that fit your style and your needs can make (wardrobe, grooming, home, culture, etc.) is amazing. That’s why you should always, always carve out a fun budget — and shouldn’t feel bad about spending it on things that make you feel great about yourself.
2. Improving your space doesn’t have to be expensive
The show isn’t just about fashion or grooming — they also tackle the guy’s living space. You probably won’t be able to do a complete home makeover with new countertops and floors and a full decorating team in under a week, because $$$. But there’s a lot to be said for basic updates, and they can dramatically change how you feel in your space.
One of the best (and biggest) transformations was in a house with six kids, and at the start of the episode, there was stuff everywhere. If you think I am exaggerating, I am not. While sure, they made a lot of big improvements, and invested a lot of money and work to improve the space, the strongest thing they did by far was getting rid of all the stuff that was no longer useful or necessary for the family — and installing easy-to-use storage for everything that they kept. You can find storage bins and a shelf unit at IKEA for less than $100. If that’ll help you come home to a space that feels relaxing, not overwhelming? That’s money well spent.
3. You don’t need to do a lot to make a big impact
I’m pretty sure in every single episode, Tan (the fashion expert) started with the basics: slim-leg pants that actually fit the guy. No, not skinny jeans, but just pants that are actually flattering and fit better than what they were already wearing. They were sourced from high-end stores and Target alike, so this isn’t about the price point. If your wardrobe doesn’t fit, or doesn’t feel cohesive, a few key staples can help you feel much better in everything you wear.
This is true for your money, too. While sure, eventually, it’d be great to know all the things, and do every single thing right, there are a few key basics that can make a big difference in your money, and they’re not all that complicated. Here are some money equivalents of buying pants that fit:

Two of those are (or can be) app-based, and one will take you all of five minutes to set up with your bank. If you do more than that, great! But if not, those basics will serve you and your money so, so, so well.

4. Accepting or asking for help is a good thing
Are the fab five going to show up at your door tomorrow to give you a makeover? Probably not, especially if you, like me, are a) a woman who b) does not live near Atlanta. (Sadness factory.) That doesn’t mean you can’t get help if you want to step up your home game, or your style game, or your skincare regimen. Do you have a friend who is amazing at any one of those things? Ask them for help, yo! I feel pretty confident in saying that your friend whose apartment looks like a real-life Instagram account would be happy to accompany you to IKEA — and if none of your friends are particularly #goals in the area you want to improve, Google will help you find great places to start.
And the same goes for money, FYI. If you have no idea where to start, ask someone. Maybe it’s a friend, maybe you pick up a book (like Worry-Free Money, Broke Millennial, or Wealthing Like Rabbits) or maybe you ask a pro. Maybe you read a fun financial blog or two!
5. Yeah, privilege is a real thing
I’ve never written a lot about privilege on my financial blog, because to me it feels like writing about air.
“Fun fact: you need it to breathe! It’s all around!”
And while no, you don’t need privilege to breathe, it really is all around. The systems we live in every day offer spoken and unspoken benefits to specific types of people, and if you’re part of some of those groups, things are easier than they would be if you weren’t. I know, because I have buckets of privileges and my life is easier because of it — I’m able-bodied, white-passing (I’m Algonquin, yo), straight, etc.

“The original show was fighting for tolerance. Our fight is for acceptance.” Tan France, Queer Eye

If you can’t imagine a group of Your People, whoever that is for you, going on a show and specifically using it to work towards acceptance for Your People? If that seems bananas? You’ve got at least some privilege. And it means some things, including money, might be easier or more accessible to you than they would to other people.
So…yeah.
Go watch Queer Eye already. It’s really, really great.
Desirae blogs about money at Half Banked, and spends altogether too much time on Twitter. She takes “money nerd,” “no chill” and “crazy dog lady” as compliments.