5 Simple Home Repairs You Should Know How To Do Yourself 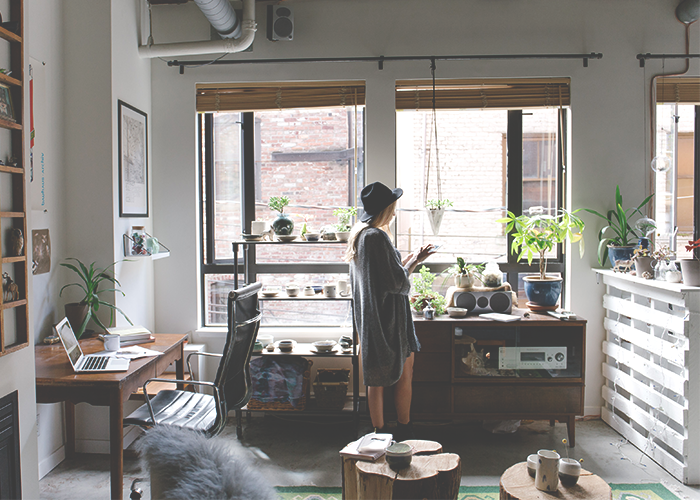 Renting gives you the luxury of calling your landlord or the maintenance guy whenever something breaks, but all of that changes when you get your own house. Calling a handyman can become expensive, and some home improvement repairs are simple enough you can fix on your own. When I started doing my own home fixes, I’ll admit, I was a bit intimidated — but it quickly became empowering to take control of my own home improvement. Who needs a man’s help? Not me!

1. How to Change a Lightbulb You Can’t Reach

Changing a lightbulb is a super easy home fix and only requires a few tools: a step ladder and a new bulb. Before getting started, check that the light switch is in the “off” position. (Otherwise, you may be blinded when you replace the light.)

Make sure that the blown bulb is cool to the touch before you begin to unscrew it from the socket. Sometimes you have to change the bulb before it cools down, in which case you can use a dry cloth to protect your hand (unless you’re a procrastinator like me and always wait a few days before replacing a blown light). In any case, after the bulb is removed, place it somewhere safe (aka where it won’t roll off and bust into a million pieces) before replacing it with the new bulb.

Changing a lightbulb in a house with high ceilings may feel like an impossible home improvement, but they can be easily fixed yourself with an inexpensive lightbulb changing kit. You may still need your step ladder, but this pole extends to 11 feet, which covers most ceilings. It comes with four different attachments and allows to change whatever lights you have around your home safely.

2. How to Replace a Light Switch

Did you change the lightbulb, but the light still doesn’t work? The light switch may need to be replaced. Rather than dialing up an electrician, you can grab your Philips-head screwdriver and make this home improvement on your own. The tools you’ll need include a screwdriver, a replacement switch, and a circuit tester.

Before you get started, locate your circuit breaker and turn off power to the room where you’ll be working. This keeps you from getting shocked as you replace the light switch. First, remove the faceplate using the screwdriver. Next, unscrew the light switch and pull it out slightly without touching any of the wires. You always want to put the circuit tester up to the wires to make sure the power is completely shut off. My apartment has some wonky wiring and the labeled kitchen circuit is actually the living room, which also controls the power to my dining room. The circuit tester saved me from a shock when I was changing out a light switch.

The power should be completely shut off before unscrewing the copper wires from the switch. There are usually two copper wires, although there may be another copper wire that has a green screw, which is the grounding wire. Unscrew each of them from the switch and install the new one by placing the wires back in place with the new switch.

Now that the wires are connected, put the switch and faceplate back in place. Once the circuit breaker is switched back on, there should be light! Not too hard for a home fix, right?

3. How to Clear a Jammed Garbage Disposal

For this home fix, you’ll need a wooden dowel, a pair of pliers, and an Allen wrench. Before beginning, check to see if the disposal is hardwired into the building. If not, unplug it from the wall. The wire will be under the sink, and easily traceable to the wall. If it’s hardwired into the building, the power needs to be switched off from the circuit breaker. Now, you’re ready to make the home improvement!

Start by sticking the Allen wrench into the bottom of the disposal using the 1/4-inch setting. Spin the Allen wrench back and forth to free anything that’s stuck. Rather than putting your hands in the disposal (convenient but dangerous), use the wooden dowel to free up any debris, which can then be removed using the pliers. Turn the power back on or plug it back in and it should work like a dream!

4. How to Patch Small Holes in the Wall

If you’re preparing to move from a rented home or apartment, filling in any nail holes is a way to get your deposit back — and who can’t use a little extra money? Since it’s such an easy home improvement, it’s definitely worth spending a little money and time to get hundreds back through a deposit. To fix small holes in a wall, you should purchase some spackle, a putty knife, a small paint brush, and color-matched paint.

To start, remove the nail from the wall. You may be able to do this with your fingers, but a hammer may be necessary for stubborn nails. Scoop a small amount of spackle onto the corner of your putty knife and carefully fill it without caking the wall with excess spackle. Any excess putty can be wiped off with your finger or a paper towel.

Make sure the surface is smooth before you use the small brush to dab paint over the spackle. Feathering out further from the hole can help it blend in with the wall and make it appear almost seamless. After this simple home fix, you may never know there was a nail there in the first place.

5. How to Repair a Broken Toilet

For some reason, my toilet lever breaks all the time. At first, I was worried the whole thing was broken, but after removing the top from the tank, I saw the chain had snapped. This is probably my least favorite home maintenance project, but it’s still easier (and cheaper) than calling a handyman!

The first step of fixing your toilet is figuring out what’s broken. Most repair kits include a valve, chain, and other inner parts, but not the lever itself, so be sure to buy it separately if this is the portion that’s broken.

Begin by shutting off the valve to the toilet and flush it to drain any water from the tank. Unscrew the wing nut that holds the tank lever into place and set it aside. Next, unhook the chain from the lever and pull the handle through the front of the reservoir. Finally, remove the nut and washer from the back of the toilet.

Sometimes, the valve can be broken, which results in low water levels or continuous running. Start by flushing the toilet to drain the water and remove the refill tube. Next, unlock the lock ring, and the valve can be pulled straight off of its base.

The new fill valve can be installed by removing the base that came with it and sliding it into the existing base. Most valves come with an extra base that’s inserted into the valve. This portion is easy to remove by pulling down and away from the valve. Once the new valve is inserted, lock the lock ring and replace the refill tube. Turn the water back on and test by flushing.

Shannon is an avid reader and loves to watch movies of any genre. She likes to write about nearly anything, but fails to have the patience to write super long works. Music is a necessity in her life, and there’s no way she could live without it.