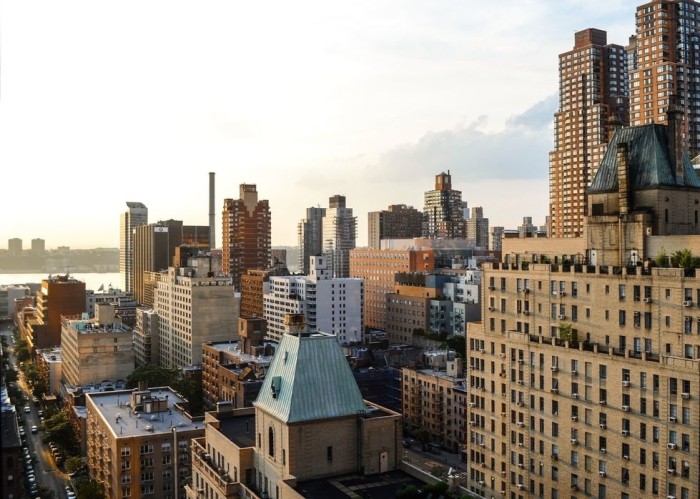 I have moved to two different cities in the last two years. When you have the opportunity to change addresses and you do so willingly, it is an exciting experience that can bring on a shit ton of emotions. I first moved from my small college town, to my small hometown for a couple of months, before moving to a larger city in my home state: Columbus, Ohio. I lived there for a year and then moved to NYC to live with my boyfriend and because my job was relocated to New York.

We are so apt to glamorize a big post-grad move to the city that we rarely discuss the shortcomings of taking the plunge and moving in the steps of Carrie Bradshaw. And unfortunately, not discussing the challenges that come with moving to a new city only encourages new post-grads to be disillusioned about what moving will actually be like. Not sharing the realities of a big move seems almost like a disservice to the eager almost graduates (and everyone else preparing to move to a big city). While I do not regret my decision to live in Columbus or New York City, there were several things I wish I knew before making the moves. Here are five things no one tells you about moving to a new city:

1. Making friends is hard and takes a lot of effort.

This sounds very negative, and it’s not. Learning how to make new friends as an adult has been a very valuable lesson for me. I’m very independent, as is my boyfriend. When we did the whole long distance thing, it was definitely hard but we each had full lives outside of each other and that helped. When I moved to NYC, he had a full life (because he already lived there), and I did not, which was hard for me. Although I hung out with his friends and did a lot of things with him, I craved my own group of girlfriends and wanted a full life of my own. I felt lonely. Not with my significant other by any means, but without having good friends. I had my own job, but at that time, I was working a lot in New Jersey, so there wasn’t really opportunity to hang out with my coworkers after work or during the weekend.

I had to put myself out there and not be scared to ask people I didn’t know well to hang out, even when it felt a little weird. When I met people I got along with, I asked them for their numbers. I actually followed through on the plans we made. I went to networking happy hours, group fitness classes, anywhere I could meet people and connect. I also had to put myself out there emotionally. It’s a weird thing to force yourself to be open as an adult because most of my friends growing up already knew everything there was to know about my personal life. But I’ve realized that being open around new friends is the only way to build lasting friendships. And after eight months, I have a good group of girlfriends, so it worked.

I love Ohio. I loved growing up there, I loved going to college there, and I loved living there for a year after graduation. It felt familiar and comfortable, but also fun. With that being said, I was ready to move somewhere new and to challenge myself to create a new home for myself that wasn’t already mapped out for me. When moving to New York, not only did decorating my apartment feel like a step toward making it a home, but picking my favorite grocery store, being a regular at a coffee shop, and choosing my gym were all the things that helped. You can stay cooped up in your apartment if that is what makes you happy, but going out and seeing your neighborhood and getting to know the area can make all the difference.  It’s a slow, exciting process and dealing with the unknown once again helps you learn what you like, and what makes a place feel right for you.

3. It’s going to cost more than you think.

I have discussed this aspect before on The Financial Diet, but really I do not encourage anyone to move until they have a lot of money saved up. Do the math: figure out how much the move will cost (ask around so you can get exact numbers), and then add more. Between security deposits and exploring your new home, costs add up quickly. I had a three-month emergency fund in Ohio saved up, and mostly all of that went to moving and moving expenses, and I still put some expenses on my credit card. It’s paid off now, and I’m building my emergency fund back up, but it did cause a lot of unnecessary stress when I moved here, which could have been easily avoided if I had taken the time and discipline to save more money before the move. Moving is already stressful enough and your finances are going to take a hit regardless, so the best thing to do is plan for the hit ahead of time. If you are prepared, I promise it will leave time for a little less stress and a little more enjoyment.

I learned a lot about myself throughout these two city moves. You are forced to do things differently and get outside of your comfort zone and you’re forced into figuring out and perfecting how you deal with uncomfortable situations. I have always been a social butterfly, but I realized that was mostly because I was comfortable around everyone I knew. Therefore, I really had to try to translate that socialness into new situations with new people. You have to be a grown up and figure it out for yourself a lot of the time. I guess I just didn’t realize how much moving would play a role in the person I was becoming. I didn’t think it would teach me a bunch of valuable life lessons, yet here I am, telling you about all the things I’ve learned.

5. Every city move is different, and living in one doesn’t necessarily prepare you for living in another.

I had two very different transitions, as my move to Columbus didn’t feel as big as my NYC move. Yes, I had my first apartment that I was paying for out of my own pocket in Columbus, so that was a financial wake-up call. But the changes that felt big were more your typical post-grad changes; learning about myself in a professional setting and trying to figure out how to balance work and life. Also, my move to Columbus came with a lot of great things: a roommate that was one of my closest friends in college, my cousin (basically sister) living five minutes away, a few good friends to hit up happy hours with, and a two-hour drive to my hometown.

My move to NYC was a different story. I moved in with my boyfriend and had him as a friend and companion, but that was virtually it. I had a few acquaintances and knew some of my boyfriend’s friends but other than him, there was really no familiarity. It was a huge change for me, and ended up being the best thing I’ve done for myself. However, I’ve learned that though moving to a new city always gets tagged with adventure, excitement, etc., in reality, it can also be scary and the adjustment takes time.

Abby is an IT professional living in Manhattan, originally from the beautiful land of Ohio. She’s obsessed with humans, solving problems, and tuna salad.