5 Thoughts On VidCon 2016, In No Particular Order 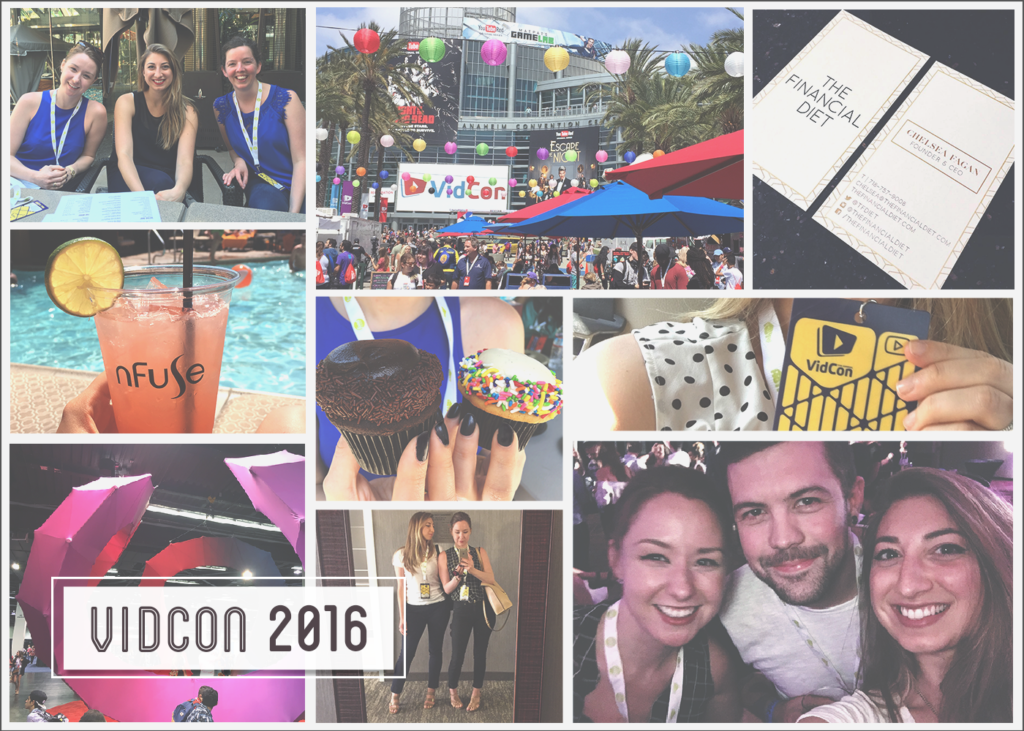 As I write this, Lauren and I are sitting on a flight back to JFK from LAX, headed back to New York and our respective loved ones (human and pup), and headed back to normal life. As you guys most likely know, this trip to California was an odd one, 11 days of sun and car rides and mourning with friends over a very-unexpected death. I’d never been before, and at least to LA specifically, I don’t think I’ll be going again for some time. I can very much understand why people love it, but I also know that I am the exact opposite of that person in terms of what I look for in city life. I’m most in love with good architecture, long walks, changing seasons, and bustling streets. Los Angeles, to me, felt more like a collection of suburbs than a city, and even the nicest stores or restaurants we visited seemed universally bordered by auto shops and four-lane streets. And the fact that so many residents — nearly everyone, it felt sometimes — were so driven and taken in by The Scene of LA and The Industry of it made it alienating to anyone who wasn’t. As someone who has never aspired to work in entertainment, and has a hard time even understanding the appeal, many small-talk conversations ended as soon as they began. Everyone seemed to be pitching something, talking to someone, waiting to hear back. The idea of one’s professional fate being so firmly in the hands of a shadowy board of executives felt stressful, but a lot of people think of working on the internet every day as their worst nightmare. To each his own.

The beach was beautiful, but even the things I enjoyed were very much marred by the bad news. Everything that already felt a bit strange to me took on a fully-melancholy cast. It’s just not for me, and probably still wouldn’t have been if everything had gone well, but we’ll never know. The point is that I’m grateful to have seen it, and feel that I know myself significantly better today than I did the day I left: I value more than ever my small social groups, my tiny work family, my relatively-subdued social life, and the fact that each month’s weather will be different than the last. I want to walk so much when I get home. I want to walk from Harlem to SoHo and only stop for lunch. I want to dive in all that much harder on my life.

And mostly I want to remind myself to be grateful for the people I have around me, the people I so look forward to coming home to and the people I have by my side. I remarked to someone at VidCon yesterday how great it is to have a partner like Lauren, with whom I can spend essentially 24 hours a day for 11 days and only have, at the most, a couple dumb arguments that last a grand total of 10 minutes and are quickly forgotten. She took care of me through a few particularly rough emotional moments, and more importantly, made it possible to keep the site (mostly) flowing as normal while everything was in chaos and I was distinctly less productive than usual. If the last (almost) two years have taught me anything, it’s that business — like life — is so much easier as a team. I feel more grateful for that than ever before.

We arrived in Anaheim on Wednesday (where we spent a lovely afternoon by the pool while we waited for things to begin), and were immediately swept into a chaotic four days after that, full of panels, meetings, parties, and the occasional rosé moment on our hotel balcony. I’ve attempted to gather my most salient thoughts here, but they’re a bit random, so bear with their disconnectedness:

1. I can’t stress enough how lucky we are to have fallen in with the Ecogeek/Green Bros team for our video production. Hank and John (who found our little Tumblr way back at the end of 2014 and gave us the first initial boost we needed to become a business) founded VidCon, which meant that we got to spend our time with what felt like the inner circle of the Con, and although we’d never met 90% of the team members before this week, we couldn’t have been treated with more warmth and inclusion. Everything from which parties to go to, to which panels were super-useful, to who we should meet with were taken care of, and we always felt important and thought of, even though we are the smallest and youngest channel in the network. We spent most of our time with Caitlin of SciShow and Matt, who directs and edits our channel, and leaving them was terribly hard — they are truly some of the best people we’ve had the pleasure of meeting in our professional lives, and especially coming off a difficult week, it was beyond lovely to be welcomed by a group as kind as them. In industries like media, it’s very easy to default to being cold or even mean, because the jobs are competitive and the barriers to entry very hard, but working with them over the past year has reminded Lauren and I constantly that there is always much more to be gained by being a genuinely warm and kind person, even to the new kids on the block.

2. It was a tough time for me to keep things together, and if I’m being totally honest, there were a few times when I got a little more emotional than I would have liked (I had to leave a party I was really enjoying way too early because I started ugly-crying in front of several team members). And it was only because we were with such kind and understanding people that I didn’t leave feeling like “The Girl Who Cried,” which so many offices and professions are liable to make you feel. It can often feel like being human is simply not acceptable in professional settings, or that there’s something wrong with us if we have a hard time keeping up that partition at all times. To feel free to be honest about something bad in your personal life, to have people who actually want to know and care about your wellness, is an invaluable thing. It’s an environment we’ve always cared about creating at TFD, but I feel more convicted now than ever that this culture of “we’re all allowed to be human, and it’s not incompatible with being great at your job” should be one of our defining features.

3. Lauren and I went to a panel on Creating Your Team, moderated by Hank and featuring several CEOs/founders of successful YouTube-based companies. It was my favorite panel by far, and the one in which I learned by far the most about what we’re doing at TFD. It was fascinating that one of the people on the panel had a team that was only one person bigger than our current operation, and that, while we’re still very small, we’re not as far from the “big kids” as we often like to think of ourselves. It’s incredibly important to remember, I think, that there is much more value in comparing yourself to your slightly-former self than there is in aspiring to catch up with someone you admire. Growing on your own terms, and giving yourself the breathing room to be slower or smaller, is crucial to staying sane through the inevitable fluctuations of any career. I used to think five people was ridiculously small, but now that I’m understanding how much a team can be capable of accomplishing at that size if they are all at the top of their game, I realize that we have so much left to create and improve with what we already have before we set our sights on growing outwards.

4. It’s interesting to see how much internet culture has gone from being the domain of the “nerds,” in terms of teen culture, to being another replication of any other social caste system in the “real” world. At VidCon, there were the cosplayers and the science-lovers and all the other subgroups that reminded myself of Teen Chelsea furtively living most of her life on online games and Livejournal. But then there were the acne-free, well-adjusted Cool Teens who are stars on Instagram and Vine and YouTube the way they almost certainly are in their school’s cafeteria. It’s good, I think, to see this sort of democratization of what the internet is and to whom, and VidCon’s overall messages of acceptance, education, and expression seem like the perfect things to be reaching all cross-sections of teens. But there was a tiny little twinge of sadness in me that the kids who would have undoubtedly been wearing Abercrombie and starring on the lacrosse team when maladjusted Chelsea was in high school are now part of this little internet world which, for our digital generation, felt a bit sacred to dweebs like us. Ah, well.

5. Spending this week with so many people who are so passionately, unapologetically in love with what they do and why they do it has been more invigorating to me than nearly anything I can recall in my professional life. To see the enthusiasm that the Ecogeek team members and other creators had for what they do all year, and for getting to be a part of a celebration of that culture of creation, was frankly magical. It’s so easy to get bogged down in the day-to-day of nearly any job, and there are certainly times in which even the most amped-up professional gets tired of the tedium of a day’s work, but we should all remember that, if we are focused in the pursuit of what we want, and honest with ourselves about what actually makes us happy to spend our days doing, we can all get at least much closer to that place of total unbridled enthusiasm. And being in a place (and culture) like VidCon, which practically runs on being unembarrassed about being Really Into Stuff, it’s a reminder that even things that aren’t your job — or, perhaps, especially those things — are equally deserving of your passion and excitement. For example, the guy who runs our show (you’ll see him in this week’s video, actually!) was just as pumped about his side project with a friend as he was about all the other stuff he does for Ecogeek. To see the energy he gets out of and gives into that project was a reminder that the only boundaries we have for hobbies, careers, and passions are the ones we set for ourselves. We can be just as amped about the evening class we’re taking to learn a new skill as we are about the job we’ve been working at for five years. It’s all about being greedy with your joy and enthusiasm, and realizing you can take as much as you want — every day could feel exciting, at least about one little thing.

I want to promise myself, for reasons both personal and professional, all of the things I’m going to throw myself into this year more than I was before. But the truth is that the overall goal is very simple: I want to work harder and give more to what I love, but more importantly, I want to broaden the definition of “what I love” every day. Because the truth is, I love a lot of things, and they all deserve for me to show them just how much.