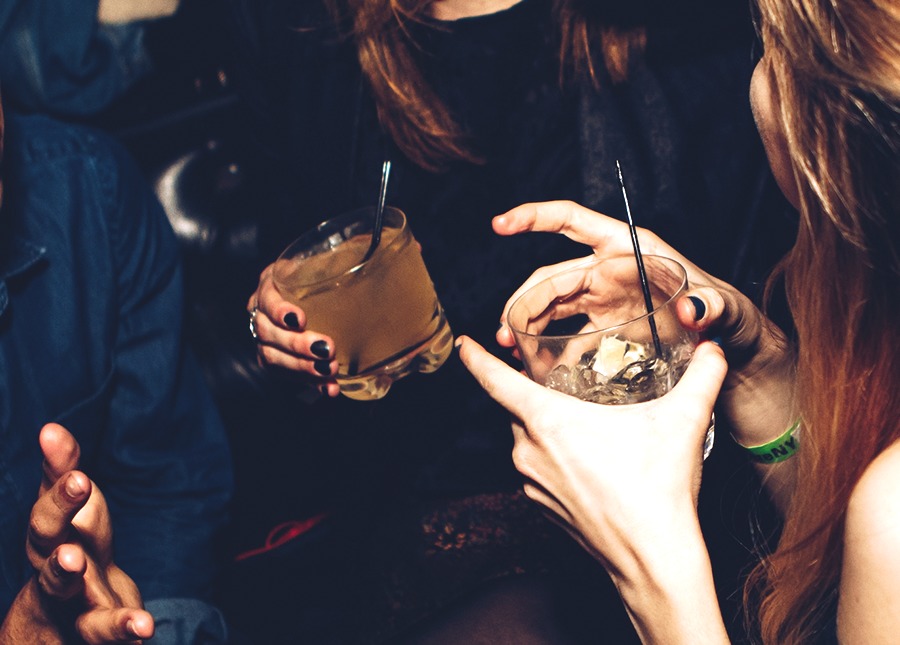 In the United States, we have an obsession with alcohol that, I’d venture to say, is deeply woven into the fabric of our country. Going out for drinks is often the default activity when we want to socialize with friends, network with fellow industry professionals, celebrate one’s success, or unwind after a long week. And our prevalent drinking culture is hard to escape. Even when you agree to go out for dinner with someone, there’s often the assumption that drinking will be involved — even if no one says so upfront. And on a daily basis, we’re constantly inundated with temptations to drink alcohol (usually in excess) from traditional advertisements, peer pressure, even the fancy, artfully photographed cocktails on influencers’ Instagrams.

In a 2016 study by the Journal of Studies on Alcohol and Drugs conducted with 1,000 13- to 20-year-olds, researchers found the more ads the teenagers and young adults saw in a one-month time period, the more alcohol they consumed, as they were swayed by all of the messages they were exposed to that encouraged drinking. In fact, the participants who saw the highest number of alcohol ads drank a little more than 200 drinks that month. Wow. And that’s just one of the many alarming studies out there that highlighting issues revolving around alcohol use in this country. Here are several statistics highlighting how the widespread drinking is in American society, and the financial and emotional cost it can have on people’s lives:

1. According to the National Institute on Alcohol Abuse and Alcoholism, 15.1 million adults and 623,000 adolescents suffer from Alcohol Use Disorder.

4. According to a 2012 study conducted by the Substance Abuse and Mental Health Services Administration, over 10% of U.S. children live with a parent with alcohol problems.

5. The National Council on Alcoholism and Drug Dependence reports alcohol is a factor in 40% of all violent crimes committed in the nation.

6. 38.5% of people suffering from domestic violence at the hands of family members report their perpetrator had been drinking at the time of the assault.

7. People married to spouses with unhealthy drinking habits are more likely to have poorer health.

8. Nearly 50% of marriages where one partner is a heavy drinker, while the other is not, ends in divorce.

As the stats show, Americans have a serious problem when it comes to drinking. Not only is people’s dependence on alcohol a major public health issue, as it causes thousands of deaths every year (an estimated 88,00o of people die from alcohol annually), but overconsumption can also have grave consequences in other areas. While the high percentages of alcohol overuse in the United States is a result of multiple contributing factors, there’s no denying that many people drink regularly because it’s a celebrated part of our culture or they feel pressured to do so.

Personally, as someone who isn’t fond of alcohol but often gets invited out to restaurants, navigating the social scene (especially in New York City) can be tricky. In any given week, I’m presented with two or three opportunities to drink to excess at industry gatherings where there are always free open bars for people to take advantage of. When you have as busy a life as I do (I’m working on it, though), it’s really tempting to consume drinks every time you’re presented with the opportunity, as a means of stress relief. Constantly indulging in that behavior, though, would have lasting consequences — not only my physical health, but on my emotional health and mental clarity as well. In fact, the first thing to go awry with me whenever I drink too much or too frequently is my ability to process emotions and think clearly. I become increasingly snappy with people and have difficulty forming a coherent thought. To avoid having that I reaction, I tend to refrain from drinking most of the time. The most I’ll consume over a week these days is one drink or two, if that.

While I’m comfortable sticking to that limit because I know what can happen if I don’t, people at parties or restaurant outings often have things to say about it. Some will give me judging looks whenever I turn down a drink or assert that I don’t want alcohol when there’s an endless supply. Interactions usually go down like this: I’ll sit down at dinner or enter a party and a server will come over, asking if anyone would like a drink. The people I’m with decide to get a drink for themselves while I respond with a polite, “no thank you, I’m fine,” to which people look at me confused. “Are you sure you don’t want anything?” they’ll say in a confused manner, as if they’re really trying to say, “Are you okay — who wouldn’t want a drink?”

Sometimes, people will respect when I say I don’t need an alcoholic beverage, but most times, I’ll get some pushback. “Drinks are free, you know.” “C’mon loosen up.” “It’s happy hour — just get one drink; it won’t cost much.” That’s not okay. People should be able to make the choice not to drink and not feel as if something is wrong with them. It’s also such an expensive activity to partake in. Why can’t we respect that sometimes maybe the reason why your friend isn’t getting a drink is because she wants to save money, not because she’s a Debby Downer trying to ruin a party or social engagement?

It’s about time we reevaluate why drinking is such a prevalent part of our society and the ways in which we pressure people to consume alcohol for fun, or to fit into their environment, lest they be ostracized. We shouldn’t be policing other people’s alcohol consumption, nor should we place so much emphasis on drinking. There are so many other avenues people can take to socialize with others instead of going out for drinks that won’t leave people like myself who, for the most part, dislikes alcohol. We need to start seeking them out and stop policing people’s alcohol consumption — and stop judging them when they don’t partake in drinking.