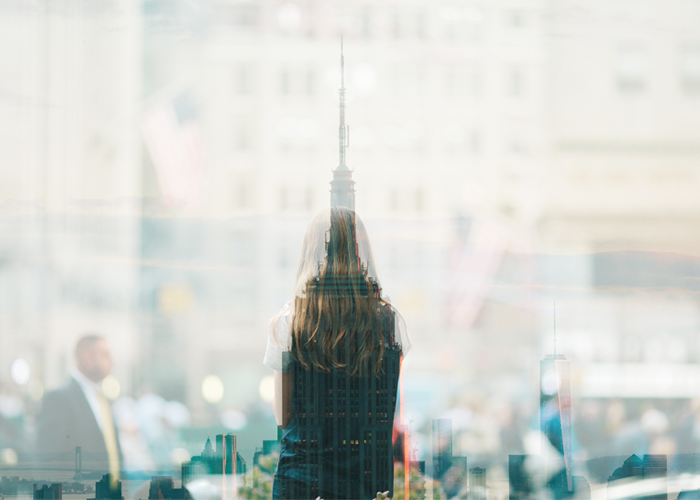 We’re warned about the challenges of city living, but it’s always painted in a delicate way. Even with the cautionary tales of people moving to the wrong areas, going into debt and roommate horror stories, we see the city as an aLLuRiNg place that we have to flock to in our 20s. We figure no city problem can be too overwhelming if Carrie Bradshaw can pack 2-3 puns about it into one sentence. And there will be always be jobs in big cities.

We’re tempted with the Sex and the City

dream version of city life, that we see on television and on social media. Buzzwords like “brunch,” “young professional,” “up and coming,” “local breweries,” and “great shopping” are more tempting than we care to admit.  So we move, quickly understand the pitfalls of city life, become disillusioned, and learn to temper the unrealistic expectations we started off with. But we still keep up the SATC dream charade.

On and off social media, I think our generation has a knack for pretending things are going well, even when they aren’t. We spin our apartment as glamorous, our relationship as flawless, our job as a perfect stepping stone to our dream career, because we feel like we need to keep up. We strive to maintain the SATC dream life we thought we’d be getting, on Instagram at the very least. Because that’s more glamorous than reporting our concrete salaries, monthly financial anxieties and the challenges we’ve faced since moving. And so we end up adding to the conversation of pErFecT city life, and heightening other people’s expectations, fueling the idea that your life really starts when you move to the big city.

With that in mind, here are 8 ways our Sex and the City

1. We expect that our friends who move to the same city as us will live close by. And that they’ll be able to meet you at a bar that’s convenient for both parties at 6 p.m. every night. In reality, we’re all spread out and trying to meet up with anyone across town after work and a rush hour commute isn’t going to happen. Of course for your close friends, you make it work. But the allusion that your best friends live close has a lot to do with the fact that the friends that live close to you become your best friends because you see them most often.

2. We assume that we should be able to afford to look a certain way. To this day, I’m intimidated by people on the streets of NYC because I will never achieve the levels of put togetherness they do. I assume they make more than me based solely on the fact that they look as good at lunch on Tuesday as I do on a rare Saturday night, or are at least more poised in their heels than I am in my discount flats. I remember being in college, and seeing people who were 2-3 years my senior pop up on my Facebook wearing the perfect peacoat outside Rockefeller center and assuming that they brought in X amount of dollars based solely on their ability to look the part on social media. I understand that at this point “Don’t believe what you see on Instagram” is the adage of 2015, but it really does set unrealistic precedents.

3. We trust that people we want to stay in our lives (both personally and professionally) will keep coming back. If television taught me anything it’s that even if my life is a mess, there’s a decent chance that I will eventually run into a Vogue editor I met at a party 5 years prior and my career will be set. We do not just magically run into people in the city. We either make the effort to stay on their radar, and keep them on ours, or we face the fact that those relationships will slip away. The same is true for friendships and romantic relationships— there’s no guarantee that at some point your Big, your Robin or your Ross (God forbid) will step back into your life.

4. We’re taught that living alone is a) the only acceptable way to live at a certain age and b) doable on a budget. Speaking as someone who moved to the big city and tried and failed to live alone, I can safely say that it’s not for everyone. It cost me too much to live in an apartment I probably shouldn’t have gotten approved for in the first place. And the benefits of having my own space never trumped the fact that I don’t enjoy living by myself. I’m still at an age where having roommates is the norm, but I think if in 10 years I’m not married or living with a significant other, I would still tend toward living with other people. If taking on roommates is your money saving M.O., that’s a good thing.

5. We need to be in a certain neighborhood, because that’s where it’s aLL haPpEnIng. We’re supposed to live in one of the neighborhoods that everyone else flocks to, but when everyone’s vying for an apartment there, the prices are completely out of control.

6. We’re led to believe that keeping up with the office culture won’t change our lifestyle. It will. It gets expensive to go out with coworkers, especially if you’re in your first few years at the office and are spending time with people who outrank you and make more than you do. When you’re outside the working world looking in, work perks seem like the mark of a great job at a cool new company. But work perks don’t correlate to how much you make. In fact, sometimes you get those perks specifically because you’re not making a lot.

7. We assume once we ~pay our dues~ in the city and in our work, our finances will increase accordingly. We see people move up and find nicer apartments, and yes, that is ideal. But it doesn’t happen on a straight timeline, with a yearly increase at the right percentage. You could be paying your dues and then some and still get overlooked for a raise two years in a row. Your rent could be steadily increasing as that happens, meaning your paycheck is stretching even less.

8. We naively believe that no one ever leaves New York/the city of their choice and is happy about it. The notion that your city years are the best of your life (“after your college years,” of course!) is bullshit. To say that being young and in a city, just like saying to be drunk and in college is the peak of your life is a gross overstatement. You can peak in your life wherever you want, and it won’t necessarily happen when you’re trying to carry out a life you’ve over glamorized in your head. You, of course, may have many happy years in your chosen city. (And this is nothing specifically against NYC, because I could definitely see myself happily moving there.) It’s just that there’s no need to put pressure on your city years to make them the Sex and the City dream life everyone supposedly lived out before you.