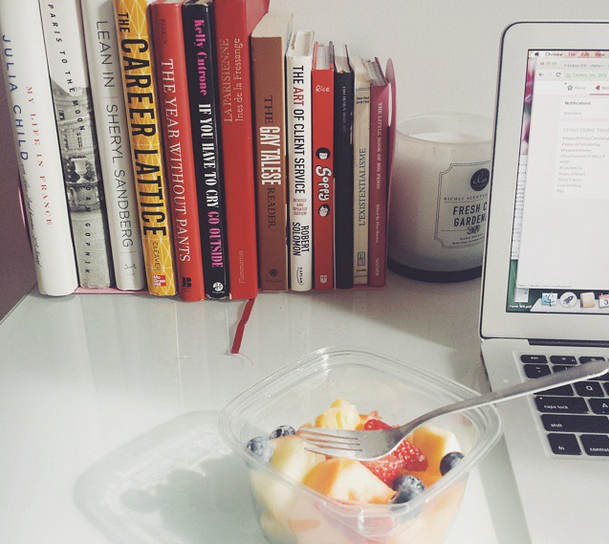 I get a lot of questions about “what your day looks like,” or “how you make your living,” and though I got them when I was a staff writer/creative director, I have noticed a significant uptick in them since I’ve had my own site. Simultaneously, there has been a flush of articles about the financial and logistical realities of blogging lately, and the ethical question of being “sponsored” by a spouse. This is normal, of course, and from what I can gather, a lot of full-time bloggers have done “what my day looks like” posts that mostly consist of “answering emails, writing posts, and gazing knowingly out my window while sipping tea.” In short, they’re not very illustrative when it comes down to the actual nitty-gritty of creating content on the internet, and making money from it. As someone who has been doing both for about four years, and who writes about financial honesty, I feel equipped to provide a more brutally honest answer.

For most of my career (“most of” being relative, as I’ve not been around that long), I was staffed, which just means I received a salary, benefits, and all of the other trappings of full-time employment. I was still writing articles and whatnot, but it was all for the same amount of money every month, so there really isn’t much to illuminate there. It’s not particularly easy to get a staff job at an online publication, but it’s also not as hard as you might imagine, as long as you get certain prestigious notions out of your head, and expand your idea of the kind of writing you can do. I know people who are staff on successful online publications with no name recognition, or who do obscure jobs at huge-name places. I also know many people who have been hired out of comments sections, so making yourself a well-known presence amongst the staff of whatever site you’d like to write for seems a really undervalued way to get to the job. (I will do a post soon about the different ways to go about getting staff writing/content jobs, so if you have a story you’d like to share about your own hiring, please send it my way.)

In any case, I’ve freelanced twice in my life, once about three years ago, and once since leaving my staff job at the end of last year. You may have noticed (or not), but I have not yet put ads on this site, so aside from the grant we received last year, we haven’t monetized at all. Ads are coming in the next week or so, but it was something we weren’t rushing with, as it adds a lot of logistical work (and requires a fair amount of infrastructure in place already, if you want to do it right). We also wanted to wait until we were more established and could therefore expect a more significant stream of income from ads, and also to really understand our own brand and readership better (which is extremely important when it comes to eventual sponsored content). We’ve built out some different features and series, and feel we have enough of a grip on a steady stream of content to start thinking ads. So that will soon be a big part of my living.

But for now, I’m just a freelancer, and I make all of my income that way. As I mentioned before, I was a freelancer a few years ago, and it was a very different experience. Having a much smaller social following, as well as no particular “beat” (personal finance) to cover, made finding and negotiating for well-paying jobs much, much harder. So it was around that time that I started copywriting as well, which is an underestimated but abundant source of freelance work, and is something I find quite appealing personally. (I ended up spending a year as Creative Director of Branded Content, and will forever go to bat about the joys and importance of making branded content better and smarter. Many people discount it entirely in the writing game, and that’s honestly their loss.)

Now, I do a combination of copy-and-original writing, and I’m at the point where I’ve had to turn down a few jobs (for the first time in my life!!) because I am too busy with TFD and my other projects. I’ll discuss the kind of writing I do for money now, as opposed to a few years ago (without naming names, because I don’t want to put their business out there like that). The majority of my freelance work consists of the following:

*It should also be noted here that publications pay wildly varying rates for different writers, and it can be for anything from social following to expertise to academic credentials to being friends with an editor. I’ve written for huge-name publications for zero dollars when I was starting out, and while I believe that writing for free is an important part of the equation at the beginning, negotiating and improving your market rate is something you have to be aware of as you grow in your career. I have taken nearly nothing for articles from places that had money to spare way longer than I should have, and it was never until I insisted on being paid a certain amount that I was.

Anyway, I do other projects here and there (I’ve done everything from a long in-flight magazine story to the copy of a website for a friend’s family member), but those are the primary streams of freelance income. In a given month, between TFD and freelance work, I will probably write 60-ish articles, about half of which will be freelance. It sounds like a lot, maybe, but on a day-to-day basis it really doesn’t break down to that much active work time. I still make time to walk the dog, goof off on Twitter, go to lunches sometimes, or watch an episode of the Real Housewives over a bowl of cereal. My day generally starts at 9 AM and ends around 6, but there is a lot of dog-cuddling and internet-scrolling in there.

I sometimes say jokingly that I’m “sponsored by listicles,” in reference to this piece, and it’s silly but it’s fairly accurate. I don’t and have never written novels or fiction or poetry or any sort of “purely artistic work,” and I know that the women who have recently been discussing the idea of being sponsored by a spouse are often referring to work that, in general, is less profitable. I’m finding that you usually have to decide between “doing only work that artistically fulfills me,” and “making money,” and I feel lucky in that I actually enjoy writing lists (I even did it on my Livejournal in high school, as my former classmates can attest), and I find copywriting to be a fun challenge. I don’t feel oppressed by traffic, and try really hard to package my work in a way that it will get a lot of views (both for my own blog and my clients). Does it mean that a lot of the work I’ll write in an average month is not something that is ~~expressing my soul~~ in a meaningful way? Maybe. But it also means that I get to build out my own website, all of which I love and which thrills me, while supporting myself (relatively) comfortably.

Yes, I have a partner, and having two incomes definitely makes life easier and risks more appealing, but I have always been the kind of gal who likes to make her own money. I feel more confident and happy in myself when I know that I am creating my own life and pursuing my own financial stability, and I don’t think I would ever feel comfortable being “sponsored” by a spouse for an extended period of time (though I in no way think that it is morally wrong to do so).

And as for a breakdown of my work day, it is about as boring and “work-like” as any other job, filled with the same things: Answering emails, tending to administrative stuff, checking off calendar deadlines, following up with people, etc. Yes, a good portion of my day is spent writing articles, but each piece is generally surrounded by at least four emails’ worth of logistical stuff, which is pretty much the norm. Even just sending invoices is something you don’t really think of until you’re having to remember to do it (and each client’s system is generally different).

And speaking of which, I know that a lot of people complain about slow-paying clients, and that has definitely happened to me. (I once had to chase someone down for nine months over 75 bucks, which quickly became a matter of principle.) But I feel lucky in that I have not had to do that ever this past year. Some clients take about six weeks to fully process payment and deliver it, but even when they’re slow, they’re on time. The issue then becomes planning out your budget with the knowledge that a project you do today will pay you months later, but you get used to it.

All in all, bloggers can and do make money, despite what my parent’s nosy friends might assume. I fall somewhere on the spectrum of “struggling” to “successful,” but I consider myself personally successful, as I always have money for bills, insurance, food, and general living expenses without having to worry (which many freelancers do not). But there are bloggers who make mid-six figures (a surprising amount of them), and I’m nowhere in the same universe as that, even on my very best month. I make about what a nurse makes, but for writing articles on the internet, and that feels like a huge and humbling victory. There is a chance that I will find myself wildly more or less successful next year, for a variety of reasons, but being able to take that risk every day and find new work feels like a huge gift in and of itself.

I don’t think that every lifestyle blogger needs to make a line-by-line breakdown of the deals and comped stuff that make up their sites, nor do I want the freelancers who get cushy print gigs all the time to reveal how they got where they are. But I do think that we could all afford to be a bit more transparent about how money actually gets made, because making it as a working writer is pretty hard, and shrouding it all in mystery and prestige only makes it harder for all of us.