Cat Lady Confession: What My Cat Actually Costs Me Every Year 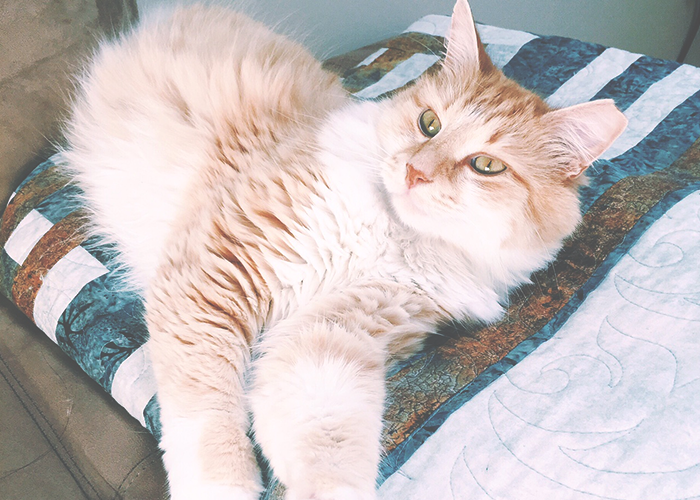 Owning a pet is an substantial expense. If you adopt from a shelter, that often yields an adoption fee; going the purebred route is even more costly. While the cash might be a deterrent for some, I’ll personally attest to the fact that you can’t put a price tag on the emotional benefits and rewards of owning a pet.

My husband and I adopted a cat two years ago from an animal shelter in Boston. We named him Faramir (a tribute to our favorite -– and arguably the best –- character from the Lord of the Rings trilogy), and he’s been a member of our family ever since we brought him home from the shelter. Faramir was living as a stray when shelter workers found him on the streets of Jamaica Plain, a Boston neighborhood. The shelter had to shave a lot of his fur because it had been matted and tangled from 2014’s harsh winter, but we were told that his fur would grow back and would eventually require a lot of attention, as he’s a long-haired cat.

As we got to know Faramir, we learned about the particular expenses that he would require. His appearance should have been a hint that the amount of energy he’d have (orange male cats are often larger in size) would be far more than other cats. Even today, at four years old, Faramir still has the energy and playfulness of a kitten. In order to keep up with his demanding level of play (and tire him out), we needed to arm ourselves with equipment. To add to the fussy fun, our cat is also a pretty picky eater and he requires a lot of grooming.

There’s a misconception out there that one shelter cat isn’t much different from the next (at least, cats are not dramatically different in the way that different dog breeds are), but our experience with Faramir has taught us otherwise. Some cats (not naming names, but…FARAMIR) will require more care and maintenance than others, depending upon their genetic makeup. With that said, here’s exactly how much money we’ve spent on our cat in the past year.

As mentioned above, Faramir is a super-picky eater. He won’t even lick patê food, so we have to be sure to only purchase canned food that contains chunks of meat in some kind of sauce. However, there are certain types that he prefers (he doesn’t like large chunks), and there are certain ingredients that make him sick (he’s a toddler with a shellfish allergy, TBH), so it’s been a game of trial-and-error to see what type of food he’ll actually eat. In addition to his wet food, he eats dry kibble

–- but it has to be the hairball formula, because his coat sets him up for some epic hairballs.

When Faramir came to us, he had some not-so-nice habits. We attributed these behaviors to the fact that he lived the first year or so of his life on the streets, without any socialization. Specifically, he had a lot of play-aggression and would sometimes confuse our ankles for things he could be hunting. Because “NO” rarely works with cats, we’ve used a lot of positive reinforcement through cat treats –- giving him treats when he plays appropriately with his toys or scratches his designated scratching post instead of the carpet. But because cat treats aren’t the healthiest thing for cats, we try to avoid feeding them to him too often.

To break down the food costs further:

To keep things interesting, we probably purchase a couple of new toys every other month, and we also need to replenish the catnip for the toys with inserts. All told, toys and catnip cost us about $90 per year.

Luckily, Faramir hasn’t had a lot of medical expenses over the two years we’ve had him. An average, once-yearly visit to the vet costs us anywhere between $150 and $200 (this cost factors in any shots that he might need to have and any routine tests that need to be done). Some people may even choose pet insurance

A large container of cat litter costs approx $10 to $15. Between scooping his litter box once a day and replenishing litter once every few days, we tend to go through a full container of litter in one month’s time.

Thank-you gifts for our landlords who take care of him when we’re out of town: $50 Per Year

My husband and I live in a townhouse that is adjacent to our landlords’ home. We are super fortunate: our landlords are awesome people who love cats, and they’ve volunteered to check in on Faramir whenever we’re out of town. We travel relatively frequently, as both of our parents live several hours away, so whenever we leave Faramir for a couple of days, we always purchase a small gift (usually baked goods, or wine) for our landlords as a small thank-you. Those little (essential) shows of gratitude rack up about $50 annually.

As mentioned earlier, Faramir’s coat needs a lot of attention. If we don’t brush him at least once a day, he’s guaranteed to throw up a hairball or two the next day. Luckily, he enjoys being brushed. For a cat with a pretty low petting tolerance (he’ll allow it for maaaybe 15 seconds), he turns into a purring machine when the brush is involved.

Faramir has all his claws because we don’t believe in de-clawing (and most vets don’t either). When we first adopted him, we tried to take him to a groomer for nail-trimming, but we quickly decided that it wasn’t worth the headache of listening to him meow in the car for 20 minutes. We’ve decided to trim his claws on our own instead. In order to make it as quick and painless as possible, we like to replace the nail-clippers every couple months to ensure that the blades aren’t dull.

So, yes. We’ve spent almost $1,000 on our cat this year, and I’m sure there are ways to cut that down. And yes, $1,000 can get you a lot of other things, like a plane ticket, or a new laptop, or a chunk of savings. However, as most pet-owners will tell you, it’s hard to care about cost when you’ve grown so attached to an animal. Faramir is truly a part of our family, in all his fluffy glory. He’s worth it to me, because it’s impossible to put a price tag on something that takes up so much of my heart.

Image provided by the author.