Confessions Of A Chronic Boredom Shopper 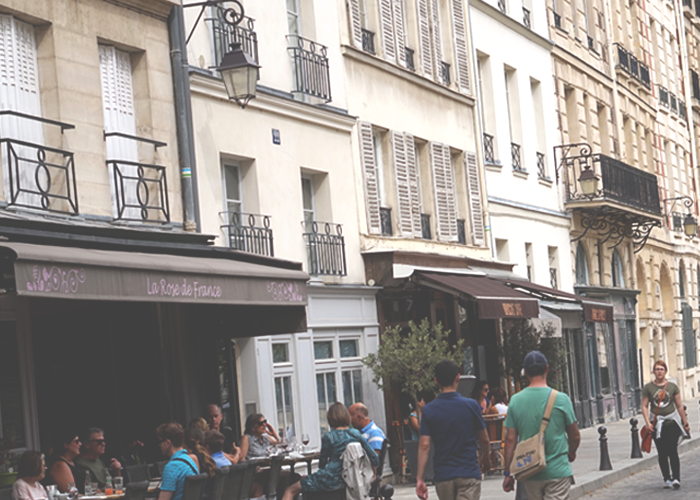 I’ve been on vacation for nearly a week and a half now, and I still have a while to go. While I realize that being able to take this much time away — to a different country, no less! — is a huge privilege, and one that I am lucky to be afforded relatively frequently in life, it’s usually not enough to satisfy the “vacation chip” in my mind. As someone who views shopping as both a recreational activity and, ugh, a mild form of cardio, there is nothing better in a European city than revelling in the overall lack of shopping malls and spending an afternoon dipping in and out of little boutiques while stopping occasionally for a drink on a sunny terrace. And if I were capable of window shopping entirely, this likely wouldn’t be an issue, but as I’m one of those people who nearly always finds something I absolutely must have, the day often ends in more money than I would have liked to spend, and often for things I’m not thrilled about having bought.

This particular vacation, as a big portion of it has been spent in a relatively isolated beach town, I thought it would be the perfect time to test out a summer vacation sans shopping, a relatively new idea for me. But, as if on cue, I lost my trench in the train from the airport and found out that the forecast for the five days we’ll be in Paris are — you guessed it — rain. (It’s moments like these when my nostalgia for the years I lived there tends to wane, and I remember how much that Gulf-Stream-constant-drizzle used to wear on my mental health.) Anyway, this means that the first thing I’ll have to do after getting my suitcases securely into our friend’s apartment is go out and get myself a trench coat.

And like any good boredom shopper, I focused in on the plan with laser precision, setting a clear budget and narrowing my shopping down to the few stores which will enable me to find the item quickly and at the right price, without letting me wander into other stores or sections, and without eroding my will to buy absolutely nothing else. I decided that I will avoid my favorite shopping neighborhoods, the ones I used to frequent even when I had next to zero in my checking account, because being among the stores — and I suppose, on some level, the people with money to spend in them — filled me with a kind of materialistic optimism. I loved being one of the women carrying the pretty paper bags, off somewhere exciting, or maybe just stopping to grab a nice, two-wine-glass lunch with a friend, as those shopping women love to do. In those streets, I could buy the sundress or the boots that would turn me into the person I long to be, and always feel just one purchase away from.

I know addiction well enough to know that I am not an addict. I have no constant urge to shop, nor do I do it to my own financial ruin, unable to stop myself from maxing out every credit card to fill my closet with things I already have in triplicate. But I am most certainly a boredom shopper, someone who can always find herself wandering the shopping districts like a cow grazes in a field, particularly in big cities where the stores are spread out enough that it also counts as a productive afternoon walk. I know that it often takes the place of something like sightseeing or monument-visiting, in part because the transactional aspect of it turns the experience into something of a treasure hunt. At the end of a museum trip I might come out more culturally rich, but at the end of a shopping trip, I might come out with a pair of perfect leather flats on 70% off. In the end, I know which one will mean more for me as a person, but in the moment, it’s hard to resist the hunt.

So how does one cure that impulse to boredom shop? Particularly when feeling stressed or down, as I have been for much of the last few months in New York, it’s incredibly easy to turn to a few hours of retail therapy to take you completely out of your rut and allow you to shut out everything that’s been nagging you. It’s mindless and aesthetically stimulating, and you become the doted-on customer who only hears compliments (however false they may be) and niceties from the salesgirls. It feels good to be taken care of in that way, and for someone who doesn’t love the feeling of a massage, I’d much rather spend $100 on an outfit to get that same level of attention.

I’ve found, personally, that physical activity has been one really effective antidote. As I may have mentioned before, I’m partway through a C25K program, which means that every day I’m highly motivated to continue my runs (lest I lose the meager progress I’ve managed to make thusfar). It’s the first time I’ve ever really stuck with a program like that, and I even have humble goals to do a 5k and, eventually, a semi-marathon. (We’ll see if my timeline is realistic, but at least I now know that I am capable of running on a near-daily basis, which is a huge start.) In any case, I’ve found that the act of running has been not totally dissimilar from the feeling I got from shopping, and even if it doesn’t end in finding the perfect pair of JCrew shorts (though how cool would that be??), it at least occupies my body and mind for a little while when I need a distraction.

In changing my dietary habits a few months ago to eventually lose 20 pounds, I noticed that the key element to my boredom eating (which so many of us succumb to, often without realizing it), was not giving up eating (which is both necessary and delicious). It was confronting why I was bored, and what was making me feel like I had no other outlet for that boredom than stuffing my face. The same feels true for shopping, which has both the same “treat yo self” undertones and the same feeling of “well I need to do it a little bit anyway, so why not?” And yes, I will always need to get new clothes and shoes occasionally, but certainly not in a mindless, aimless way.

A big part of that journey has been nearly cutting out fast fashion entirely, because I realized that a lot of my boredom shopping stemmed from how easy it was to access and “not a big deal” it felt to spend money on. Just like I now rarely keep chips in my cabinet, I have cut out the feeling of “oh I can just grab a $10 dress when I feel like it” from my wardrobe. Aside from the enormous human impact of fast fashion, it’s also just an incredibly easy way to nibble at my checking account while not getting anything particularly meaningful in return. Boredom is hugely about what’s in front of you, and fast fashion just seems way too easy.

I’ve also started (or renewed) several activities and hobbies that keep me busy on the weeknights I might otherwise be taking a stroll around SoHo or down by the Williamsburg waterfront. Boredom is also hugely in the time we leave open, and particularly with Marc out of town four days a week, it’s hugely important not to ever feel like I’m just sitting there with time to kill. When the few evenings you have alone and to yourself feel like a great moment to just relax, enjoy the solitude, and watch a movie or something, then you know you’ve “made it.” If you are constantly itching for things to do just because, it’s probably time to get a few activities on your schedule.

Most importantly, though, whether it’s a pint of Talenti or a new pair of jeans, the most important element is learning that you won’t actually be happier or more fulfilled more than you were before as soon as you’ve finished eating or walked out of the store with that bag. Since I’ve started practicing #NeutralLife nearly a year ago and have whittled my wardrobe down to (mostly) versatile investment items, it’s been easier to feel good in my skin and in my clothes, and to not trick myself into thinking that I will become a better and more interesting person with the right outfit. I already have, largely, the right outfits (in my opinion), and I know for a fact that all the things I have to work on as a person are not going to happen in the checkout line of a Club Monaco.

For this particular vacation, I’m going to go against my initial impulse to limit my shopping to a crash diet of “in-and-out-of-one-store-with-my-eyes-closed.” I need to get a trench coat, and I’m not going to treat myself like a child who can’t be trusted. I’ve changed my life enough since my last trip here — over Christmas, where I clearly spent way more than I needed to — that I believe I can enjoy a little bit of shopping without slipping into destructive old habits. I’m going to enjoy the long walk, enjoy window shopping, enjoy my old neighborhood, and not let shopping become something I need to do to prove something to myself or anyone else. I will never be one of those shopping ladies, and one afternoon spending too much money isn’t going to make me one. But I can enjoy a trip to the stores here and there for what it is — something fun and relaxing to do once in a while because I need to, and not because it’s filling a space in my life that shouldn’t be there in the first place.