Confessions Of The Girl Who Was “Too Smart” For Community College 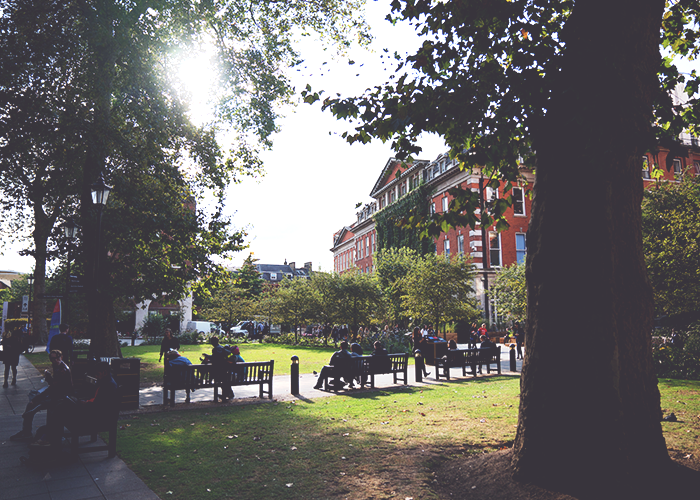 Like many Americans, my senior year of high school was a time of nervous excitement, with the entire class busy applying to colleges, visiting campuses, and anxiously awaiting the results. There was a big board on the wall across from the guidance counselor’s office, covered with little black graduation caps, each with the name of a school and the name of a student written on it in silver marker. When you chose your school and secured your place, you got to get a little black hat and pin it to the board with pride, so that everyone on their way to the cafeteria could see your good news. By mid-spring, that board had come to haunt me, and I strategically avoided it on every route, even if it meant taking a long way around to gym class.

The truth was, I knew I had practically zero chance of getting into any decent school, yet I played along and applied to a few in the flailing hopes that one would take me. I hadn’t taken the SATs, my grades were terrible, I nearly failed out in my junior year, and — because I was often grounded for months at a time due to bad grades — my extracurriculars were spotty at best. A college would have been insane to take me, but I strategically applied to the wacky liberal arts schools for whom I thought I had a chance of spinning my profound, almost clinical laziness into some kind of tortured genius. I remember actually having the fleeting thought that, since they were so expensive, they’d want to take anyone they could just to have someone paying (or borrowing) the tuition. All of these thoughts were ridiculous (and dangerous), but luckily for me, every one of the four schools I desperately applied to rejected me in short order, and I was doomed to go to my local community college. When my guidance counselor sadly gestured to put it on the board, I rejected the offer, preferring to have my name totally absent than burdened with the confirmation that I was off to CC.

If you haven’t gone to a community college — even one which, like mine, is actually excellently ranked and a great institution — you simply don’t understand the cultural stigma that goes along with it. You might be peripherally aware that it’s not the celebratory news that even a third-rate state college acceptance would be, but you don’t know how the collective disappointment and judgement manifests in everyone around you. Your peers are flippant and cruel, lightly mocking of your fate and seeming almost religiously grateful that they secured a spot in a faraway school with the “college experience.” Their parents, and your own relatives, express an even more insidious form of sadness for you. Unlike your peers, they can’t come right out and make offensive comments or crack jokes, so they look upon your news with a forced, faked smile (or even a tiny frown) and make comments about how you’ll “make the best of it.” They speak of the two years you’ll put in at CC as some sort of prison sentence, something you’ll get through before going to a “real” school. It’s unclear if they’re even attempting to hide their overall disinterest and disappointment, but the result is the same as if you’d shown up to their house with a facial tattoo of your favorite pop-punk band. In their eyes, to some degree, you had sealed your fate.

And the worst refrain you’ll hear, by far, if you’re an even mildly articulate and aware person, is that you’re in some way “too smart” for the institution of community college. No matter that I was lazy, unmotivated, and disdainful of formal education — because I could string a few sentences together, I must be destined for greater things. It was a flattering (if totally untrue) sentiment that I was too good for what I was doing, and it took all of a few seconds for 17-year-old me to get it lodged into her head. My shame over community college increased, and I started downplaying the truth of my situation to new people I’d meet. I didn’t want to come across as what I perceived to be a failure, nor did I want people to judge my merits on my enrollment in a school that anyone could get into. I hated the way people involuntarily frowned when I gave the news, the cracks my friends would make, the condescending way they would talk about their newer, wiser life off in the dorms of some school in rural Ohio or wherever they were. “I am too smart for this,” became my mantra, and so I blew off community college altogether.

I worked odd jobs, took on meaningless “internships,” and generally floundered for the first two years after high school. As my friends were making it through their college educations, increasingly viewing me as the weirdo who just wasn’t going to go to school, period, I did everything in my power to avoid CC. At the end of my dull “lost years,” I even re-applied to a bunch of schools, this time strategically picking the shittiest colleges I could find which seemed essentially like high school with dorm rooms, where I spun my time off as this grand period of discovery, and used my bilingual status as the only possible crutch that would give me a leg up. Still, much to my surprise, I was rejected, and off to community college I went to put my nose down for a year or so and eventually get into something decent.

As it turned out, not only was community college a wonderful experience, but it was absolutely for the best that I had waited to go back. At 17. I was wholly unprepared for the rigors of serious study, but at 19, I felt energized and ready to do something great. I adored my classes and professors, got excellent grades, did every play I could, and even started my own club with school funding. I took the experience by the horns and loved it, even moving out and living in a house with roommates to give myself a more independent experience. Sure, I was still in my hometown, but my entire social group had changed — and several of the friends I made there are still close to this day, people I love and respect who all went on to do awesome things after getting their associate’s.

By the time I was ready to transfer — when I had been accepted into several very prestigious U.S. programs (and even registered at one) — I was also ready to move out of the country. I left for France and, finally, felt that I was shedding my own insecurities about community college, and the overwhelming American notions about how you are “supposed” to do college. In my new environment, where going to huge football games dressed in your school colors was unheard of, I forgot all about my once-burning desire to take out as much student debt as necessary to be a part of it. I felt profoundly grateful for my nearly-free community education, and the fact that it freed me to do all of the things I wanted to do, unencumbered by debt or stifling internship-to-job pipelines.

Cut to today, and I have no degree at all. And I could not be more proud of having attended a community college, or more encouraging of others to do so. I would love to one day teach at one, offering super-affordable classes on working in media to people of all ages and incomes who are interested in learning about it. I believe strongly in the power of an affordable education, both as a social equalizer and a chance for teens to just be dumb teens, to figure things out slowly, and to not live with the burdens of the decisions they made as a senior in high school.

And I don’t feel anything but sadness for my peers who were once cruel about community college, who now live with significant debt regardless of their employment status. I don’t feel vindicated against them, nor am I glad that their decisions turned out to impact them negatively in the long run. They are simply victims of a culture which taught them that a four-year education the minute you leave high school is the definition of success, at any price. And unlike me, they weren’t lucky enough to get rejected before they could sign their financial futures away for a degree in English. I don’t blame them for mocking me, or the institution of community college, particularly when I was so happy to peg myself as “too smart” for the path I was being forced to take. It’s only natural, when you grow up in a rigid social system, to enforce those norms at every chance you get.

But I hope that we can all be smart enough to learn from our collective mistakes and stop imposing these constricting (and financially ruinous) norms onto teenagers. I hope that we can understand that there is no such thing as “too smart” for a good financial decision, and in fact, it’s often the smartest thing to do to accrue the least debt possible, and to maneuver your way into a degree and job while sustaining the least damage to your bank account and credit.

If I could do it all over again, I wouldn’t change a thing, even all the shame and frustration I felt over not being able to put a dumb hat on a dumb board across from my guidance counselor’s office. Because now I know how it feels to be left out, the stigma students can feel from not being able to participate in the system, and I feel more convicted than ever to do what I can to reduce that stigma. Community college isn’t just a great option financially, it’s also a wonderful place to mature and give yourself breathing room to figure things out, to change your mind and explore your options without the pressure of a four-year timeline or six-figure debt. It’s something that every teenager should get to experience, especially the overconfident ones who are convinced that they’re “too smart” to be making a good decision.