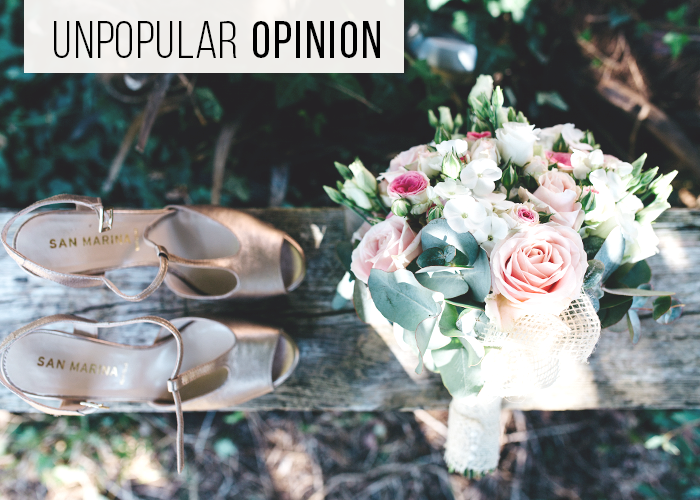 According to the Financial Women’s Association, a college-educated woman in the US can expect to lose out on up to $800,000 in wages over the span of her career due to the effects of the gender wage gap. That’s a dizzying amount of money, and the figure doesn’t even take into the account the wage gap for women of color. It also doesn’t factor in all the unnamed but expected emotional labor women are forced to perform both publicly and privately in order to be considered competent, the “second shift,” or the lifetime cost of being a female consumer.

All of that money that should be going to women who’ve earned it is instead being used to line the pockets of less-qualified men, who gleefully fail upwards and blame women’s career stagnation on a “lack of dedication” to their work rather than documented hostility towards women in the workplace. But I’ve got a practical solution: women should marry for money. Not love or passion, but access to wealth. At every stage of their careers, male-led institutions make excuses to pay women less than they are worth, if they aren’t pushing them out of high-paying jobs outright. As far as I’m concerned, that money belongs to us — women — so why not marry the men it was given to instead, and make it ours?

“But that just makes you a gold digger!” I can already hear the protestations, and to that I say, “Why is that a bad thing?” We live a world in which women’s ambition is disparaged and punished as a way to return us to second-class citizen status. It’s no longer acceptable to simply say that women are less capable in the workplace, so instead, our media perpetuates stereotypes about working women that “sell anxiety” and scare women about their ability to manage it all. Those stereotypes are internalized by men and women alike, creating both the assumption that women can never find a healthy work/life balance (and must therefore choose between the two), and a justification for the dismissal of the potential of female workers by men. For women who want to be wealthy on their own terms, the odds are abysmally stacked against them. Men just have to put in the time. It’s why I see marriage as a specific solution to the specific problem of a capitalist economy.

As I’ve learned about the historical impact of marriage, it has dawned on me that marriage is first and foremost a contract. The only thing unique about it is the sentiment we’ve attached. The only reason the current model of marriage is still positioned as the ideal is because so many governments incentivize marriage. It’s also why marriage equality is such an important issue. It’s great that same-sex couples can have their love legally recognized, but it’s more essential that they are legally entitled to things like survivor benefits, hospital stays, the power to make medical decisions, and yes, inheritances. It’s a moral failing that we ever tied those essential rights to something as fickle as romantic attraction.

People often forget that marrying for romantic love is a fairly recent development in the Western world. Marriage has traditionally been a method of consolidating wealth. Its single economic purpose was to formalize alliances and ensure political security. There’s an entire genre of period entertainment centered around the struggle between love and “duty;” specifically, the duty to perpetuate the financial security of a family line. It’s also not a coincidence that that duty traditionally fell to women.

Now obviously, that model had problems, and it’s why we’ve largely moved away from it. Marriage as a consolidation of wealth disadvantaged women because women were seen as property. Their wealth was not their own so much as their husband’s reward for promising to take care of them. But though social norms have changed, capitalism still mandates the accumulation of wealth in order to survive. It makes sense to me to return to marriage as an economic necessity rather than a romantic one, especially in a world where women continue to be undervalued and objectified, despite the cursory existence of legislation to prevent exactly that. A marriage contract is a piece of paper, and you don’t need to be in love to sign your name.

When it comes to “gold diggers,” our perception is once again necessarily skewed in men’s favor. The words conjure images of vain young women dripping in expensive labels, and taking advantage of earnest (nearly always older) men. What never gets included in that story is all the intangible things those women provide to their male partners in exchange for access to their money. Whether it’s the ego boost of having a pretty woman on their arm, the psychological benefit of a well-kept home they don’t have to tend to, raising their children, or the social advantage of being viewed as virile enough for a younger lover by their peers, so-called “gold diggers” are simply using the labor they’d otherwise perform for free as economic leverage. They are taking advantage of the objectification of women for their own gain.

Too many women spend their lives devoted to their husbands, only to find themselves hitting middle age and replaced by second wives too young to know better. As Chimamanda Ngozi Adichie

famously said, “Why do we teach girls to aspire to marriage and we don’t teach boys the same?” That difference is why we shame divorced women, but celebrate thrice-married men. I say that women can’t afford not to make financial security their number one priority in all situations. Women are being paid less over our lifetimes for no reason, other than the institutional sexism we have little power to overrule. Time to get it from the source. If you have the opportunity to do so, why not hold firm to the cash that would have been coming your way in an equitable society?

As far as I’m concerned, the only potential ill in a relationship of that nature is the deception we assume is going to be involved. But even that is problematic when we are told that (straight) men’s pursuit of wealth is often driven by the desire to impress women. Men cannot both assert that they are more valuable partners because of their wealth, and also denigrate women for valuing their wealth when assessing them as a partner. You can’t have it both ways. Either your money is a measure of your worth, or it isn’t. It strikes me then that if men don’t want to be assessed by their earning potential, they should do more to ensure that marriage does not yet remain the best way that women can achieve financial parity. If men paid women adequately and fairly for their labor, we wouldn’t need their money.