The Financial Confessions: “I Broke Up With Myself” 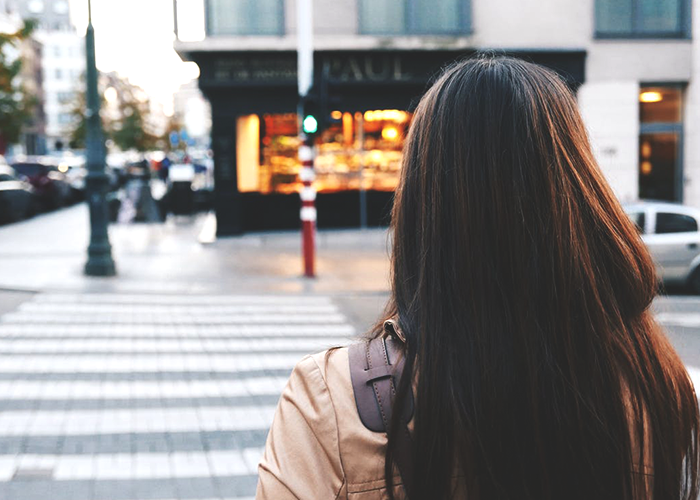 We’ve all been through a breakup that has sent us to the couch, in tears, with a bowl of Kraft mac n cheese and a pile of dishes in the sink we won’t wash. We’ve all gone to work some days and forgotten to put on lipstick, catching our own eye in the bathroom mirror and not recognizing the ghost staring back. We’ve all woken up and thought, “I can’t do this. I can’t possibly do this day.”

The unfortunate thing about being an adult is that we have to do the hard days, no matter how insurmountable they feel at 7:00am. In high school, and, admittedly, college, many of my hard days were the result of a boy. Stupid ones, of course, but I didn’t see that at the time. I was unsure and 16 at homecoming or a tipsy 22-year-old wobbling to the bar, irrational thoughts darting like flies through my brain. All of the thoughts were about him, how he was the problem, how he had taken my self-confidence, stepped on it, and ground it deep into the earth. He was the reason I hated myself. He was voice in my head telling me I wasn’t good enough, strong enough, smart enough.

Eventually, I found a man who brought a new voice to the conversation, the one I am still with today (ironically, I met him at a bar). He changed the way men spoke to me in my head, and as the years went by, I forgot the lies the other boys had pummeled into my self-esteem. But in the last months, some of those negative words have wormed their way back into my vocabulary.

I found myself using abusive language as a pep talk. Everything was a “you should be doing,” even when I was doing the thing I had previously told myself I “should be doing.” I “was fat, so I shouldn’t eat that fudge.” I “watched a movie yesterday, so I should get some work done tonight.” By this logic, I was never doing enough. I didn’t deserve to relax in the evening if I wasn’t productive enough during the day.

My best friend would tell me, “You are enough, just as you are.” My boyfriend, bless his heart, has never given up on trying to make me feel better. Both were patient with me as I listened to their words of encouragement and let the love pass right through without making a mark. The mystery was why these negative words had come slinking back, like a snake you thought you beheaded and buried three years ago. But it was rising from the ground, spilling wet dirt off smooth skin, and slithering into the conversations I had with myself.

It took me a while to realize the negative words returned because I had started to compare. I turned 25 and looked at my friends with amazing jobs in Palm Beach, delicate engagement rings, down payments on a house. Every day was a constant stream of, “Look at me, look at how well I am doing. It is, of course, better than what you are doing.” It was like the more an Instagram post deflated my self-esteem, the faster I would double-tap.

You might say, “Why not just unplug?” It’s not that easy. I work in social media, and a large part of my job is to stay connected. All the time. I must pay attention to #trends, be engaging, and appropriately use emojis and the newest meme. I thought I was good at what I do until I started applying for other jobs with better pay and more opportunity, interviewing en masse, and getting no offers. The negative words swirled like a tornado in my brain every single day, battering my skull with toxic debris. We’re going in another direction. We had a lot of qualified candidates for this role. The position has been filled.

My life was my career, and it turns out I wasn’t that great at it.

One Wednesday night, after a particularly bad week filled with current-job stress and four job rejections, I went home to my apartment and watched The Princess Diaries. I had hoped the familiar movie would ease my anxiety and help me fall asleep early, but it didn’t work. Actually, it just made me cry because Mia is a stunning and intelligent princess, and I was in a place where I believed I would never be successful, tiara or not. So I opened a bottle of wine and said, “I’ll have a couple of glasses. That will do it.”

Six glasses, one bowl of take-out leftovers, and five hours later, I was cradling the toilet, alone and vomiting. It occurred to me that I didn’t need a boy to abuse me. I was doing it all by myself.

It was a turning point. I sat down the next day (after shamefully swallowing Ibuprofen and an everything bagel), made a list of things I enjoy doing, and realized I didn’t do any of them on a daily basis. I compiled the words I used when I spoke to myself, horrified because I would never speak to my friends that way. I was a person I didn’t want to hang out with. The thing is that you spend more time with yourself than you will with any other human being.

So I broke up with the negative self in my head. It didn’t happen overnight. It took a lot of intentional time spent slowly inching away from bad habits; picking up a book instead of the TV remote, letting an email wait until tomorrow, eating breakfast without looking at Twitter. I even had my boyfriend text me every night after work: “What are you doing right now? Turn off the TV. Do yoga before you go to bed.”

It meant not putting on pajamas early and lulling myself to sleep with Youtube vlogs just because I had a bad day. Vlogs are, after all, watching another person’s better, brighter, sparkling life to escape from your own lackluster hours.

I forced myself to write again, upon realizing it had been six months since I wrote a sentence that made me proud. That was hard. Working in social media teaches you how to read without thinking and react quickly. I had to unlearn the art of distracted multitasking.

I started cooking meals instead of heating up a frozen pizza. I journaled about things that made me happy and events I was looking forward to, even if it was just “buying a chai latte instead of making it at home” or “using my gift card at T.J. Maxx.” I registered for a half marathon because it would force me to run and be strong and breathe again.

The little things have the power to change us the most.

Lazy. Not working hard enough. Fat. Stupid. Those words still exist in my brain, but I don’t use them as much anymore. I broke up with myself, and we are back on speaking terms. Maybe someday we will even be friends.