The Financial Confessions: "I Overdrew My Bank Account 33 Times In One Year" 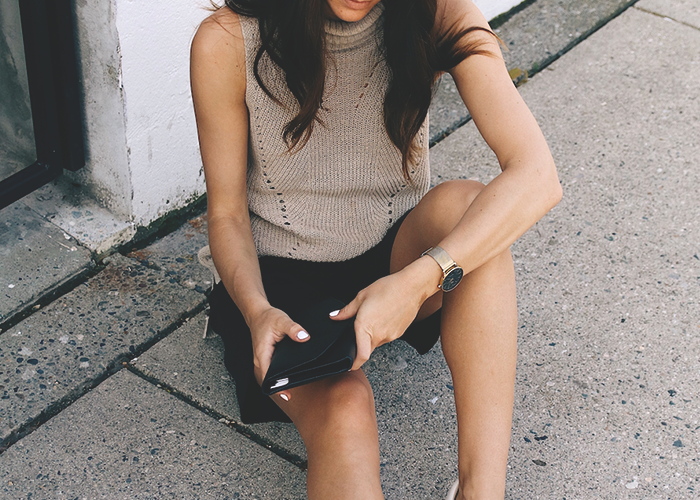 Yes, I went into overdraft 33 times during my first year at my first “real” job. I realize this is not normal. Or is it? I remember one of my roommates in University joking about using her bank overdraft to buy takeout coffee, and just the other day, hearing a radio host explaining how he used it to purchase sports memorabilia. Regardless, I feel ashamed and completely embarrassed.
I have not shared this information with anyone, and I hope I never have to. Even writing this article at my parent’s place for the holidays, I find myself opening my web browser to conceal what I’m really doing anytime someone comes into the room. And to be honest, my bank account is currently negative.
I knew I’d used my overdraft a few times this past year, but after looking at my online banking tool and realizing I used my overdraft 33 times, I nearly hurled. It’s the same feeling I get when I have buyer’s remorse, or lie to my boyfriend about how much money I have in the bank. It’s a horrible feeling. To make it even worse, I was charged $5 every time I used it. For some quick math, that’s $165 ($132 USD)! Break that down per month, that’s just under $14. Little did I know, my bank has a monthly overdraft plan of $4 that I was unaware of. I can’t decide whether I want to keep using this plan in the new year, as I hope to not rely on it the same way I have been.

Your bank overdraft is a service to protect you, in emergency-type situations, not a service to be used multiple times a month. I grew up in a lower-to-middle class family, where we had always been careful with money. How did I let this happen?
This past year was not only the year I landed a “big girl job” making more than $40K (mind you, this is Canadian currency, so about a little more than $32K USD), this was the first year of living on my own, and beginning to pay back my student loan debt. Towards the end of each month, money was often fairly tight. My second bi-monthly paycheck was devoted to those big bills such as rent, utilities, and that dreaded student loan payment. My first paycheck usually went to groceries, car insurance, my phone bill, anything on my credit card, and large-ticket items for my new place (furniture, appliances, etc.). I do split many costs with my boyfriend, although they tend to add up fairly quickly.
I’d spend money on “non-essentials” when I had money in the bank. When I say non-essentials, I’m talking about an impromptu trip to my favorite online clothing retailer, a second-hand website, or my local thrift shop just to see what they had. With packing up my life and moving across the country for work at the beginning of this year, I got into the “minimalism” trend and attempted to purchase items intentionally and more environmentally friendly. Unfortunately, this often led to purchasing articles of clothing online that did not fit properly or items that were not initially what I had expected — but I tried to “make them work” before re-selling them at a much lower cost or donating them. I also come from a frugal family, not only being careful with how money is spent, but also spending money on sale items usually due to the low cost.
I would leave just enough in my account for when the big bills rolled in. This cycle happened almost every month. I would usually go into my overdraft for various automatic payments, such as monthly bank fees and add-on gym fees (extra $20 for yoga) — small fees that, because they were hardly on my radar, made a big difference.

As a result, I sometimes found myself strapped, without enough cash to make a spontaneous travel trip with friends or a nice date night with my boyfriend. I had even been scrambling to pay for my flight home for the holidays.
If you’re a twenty-something individual like me, you most likely have financial goals. Goals that you may have yet to meticulously plan out — but things that you want to achieve. I want to pay off my student loan debt, which is currently sitting at ~28K (~$22,500 USD). I want to have an emergency fund of sorts, some sort of security blanket. I also want to purchase and own a home one day. And on top of it all, I want to make sure that I enjoy my life in the process.
I think that is one “mistake” that I have made. This year, I have been trying to throw as much “extra” money as I can at my student debt. Even though I am being charged the cost of a Starbucks latté in interest per day, I have also come to the realization that it is okay to treat yourself from time to time, to buy the more expensive blend of coffee. In addition, it is crucial to have some money in the bank — even a few hundred dollars — for emergencies, and even for spontaneous moments. Having the mindset of “this $20 will last me through the week” is not realistic.
With making more money than I ever have before, but also spending more money than I ever have before, this year has been a huge financial learning opportunity for me. I have made a plan for this next year, to hopefully not use the overdraft service as many times as I had. This plan includes putting into practice things that I’ve been telling myself I should for a long time, like setting up a monthly budget and tracking my daily spending. The month of December was the first month I tracked all of my expenses, which to me, is a huge step in the right direction. Here’s to a financially healthier 2018.