First-Generation Children And The Power Of A Designer Bag 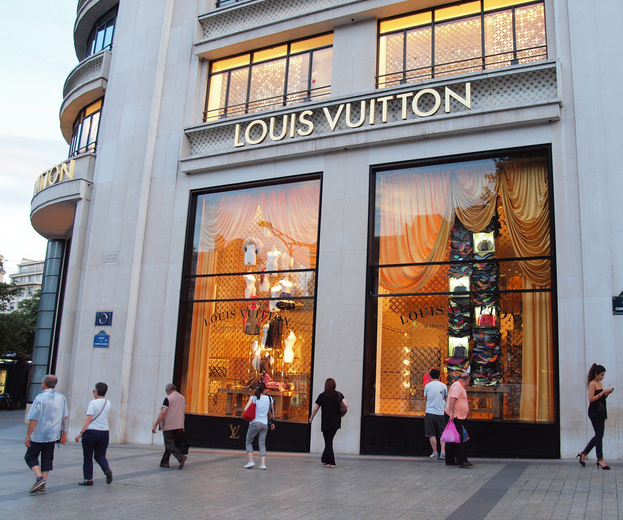 When my parents first immigrated to the US, my dad worked as a Chinese takeout deliveryman. One night, he stood outside one of the public phone booths (when New York City still had them) for ten full minutes in the rain, water seeping into his thin, peeling leather jacket, debating whether he should spend the twenty-five cents to call my mom to tell her he was going to be late coming home. He kept doing the math in his head: one quarter = two Chinese RMB, and he couldn’t bear the thought of spending two RMB just to make a three minute phone call.

In the first ten years that my parents were in the US, they did not go to the movies once. They rarely turned on the air conditioning or heat. My mom wore the same threadbare pajamas that she had gotten from China in the eighties, with the ruffled edges now sagging to create a zigzagged hem, as if some animal had been chewing on them. My dad wore the same Yankees cap and the same gray “I Survived a New York City Taxicab Ride!” T-Shirt, which had holes under the armpits and beard-like fraying along the sides. Of course neither he nor my mom had ever set foot inside a yellow cab. They were veterans of the underbelly subways of New York City.

In the twenty years that my parents were here, they had saved up enough money to pay off our condo in Queens, opened up and failed at a store in Greenwich Village, and bought two properties in China. My parents didn’t understand the stock market, so they just stashed all their savings away in the bank regardless of interest rate. These days my mother spends every other winter in a studio in a tropical island in Southern China, and every three years they make sure to visit the apartment they had bought on the outskirts of Shanghai. They told me the real estate developer was rude to them after they bought the property because the value of the apartment had risen so quickly. This is where they will spend six months each year in the future, when they have fully retired, rocking on their balcony and spend nights looking over the town’s glistening lights, eating watermelon in the cool night air, gossiping about relatives’ children, bickering about the humidity and the mosquitoes and pollution.

When I was in high school, I helped out at my dad’s store in the Village on weekends, starting from Friday evening through Sunday early a.m. and sometimes for half a day Sunday, doing my homework between greeting customers. I took the train from Chambers Street to West Fourth Street after school and walked over to MacDougal Street. My dad would give me $20 each weekend so I could run over to the next block for a shwarma sandwich and pick up a $10 CD. Back then this was how I learned to love skewered lamb and the Backstreet Boys.

My dad’s store was a gift shop of sorts. He sold counterfeit purses, watches, sunglasses, tourist T-shirts, and various recreational drug-use paraphernalia. This was Greenwich Village after all. I helped my dad by polishing the fake watches and carefully gluing Kate Spade labels onto purses, or holding the bag as he punctured the Chanel logos into the shiny leathery surfaces. All our customers knew the bags were counterfeit. It was like a secret handshake common to all those who aspired to labels they could never afford. My dad bought the bags and watches from his distributor friends in Chinatown. We would visit the backrooms of his friends’ stores and the bags would come spilling out of large plastic bags. My dad would carefully sift through them, press on the leather and examine the seams, smell the insides to make sure there were no chemical leftovers, while joking and drinking tea with his buddies. He would pay in cash and pack them into boxes and load them into dollies to go back to his store. Sometimes he’d walk from Chinatown to Greenwich Village if the weather were nice enough to save on subway fare. There were no moral debates over sweatshop laws or concerns over trade, this was simply an immigrant making his living.

My mother, in the meantime, spent twenty plus years as a Registered Nurse in the Rehabilitation sector of the Metropolitan Hospital of New York. She worked the night shift so that she could be there when I came home from school. Often, she told us stories on weekends about difficult patients or ill-tempered colleagues, and “wiping the asses of men who would curse at me and tell me to go back to where I came from,” she said while slurping little wontons and drinking coffee.

My mom went to work at 10:30 p.m. and came back at around nine in the morning, whereas my dad often left for work before dawn. As such, my parents almost never saw each other. They split the day around each other, each a half-Oreo cookie with its own centers around day or night.

And so it went for many years. My dad closed his store in my last year in high school and started working for the Post Office. He takes his work almost too seriously, expediently delivering mail so that he would rarely get overtime — a completely opposite strategy from many of his colleagues. My mom retired early. I in the meantime went through the public school chain of seven different schools before landing in college, then business school.

My dad called me earlier this month and asked me to buy a purse for my mom for her sixtieth birthday this year. You know she’s at an age now where a lot of her friends have nice things, and she wants them too but she would never buy it for herself. It’s true, my mom has made some small changes — a fitting black sweater instead of baggy sweatshirts, comfortable walking shoes instead of the same pair of white sneakers, even a little bit of jewelry here and there. They still have not gone to the movies. But air conditioning is okay now, in controlled quantities.

What are you thinking about? I asked.

I don’t know. Just get her something she’d recognize.

Okay, let me do some research. I said.

This sounded easy but as I soon discovered, it was a daunting task. To find a brand that my mom would recognize while not bankrupting my father was no small feat. My parents had educated me well and I had zero idea what was fashionable or considered “cool” in the realm of purses. Alexander Wang? That sounded Asian, my mom might think it was made in China. Michael Kors? Is the “s” silent or not? Is my mom going to pronounce it correctly? These concerns, however trivial they may seem, presented real roadblocks to my selection.

After what seemed like a huge amount of time clicking through various designer websites online, and being tagged by Google as someone who is obviously going to start her own Fashion Week in her basement, I finally chose the iconic Louis Vuitton Speedy.

I was almost done with my research when my mom texted me one day and asked me what we should get for my dad, since he will be turning 65 and retiring.

How about a nice watch? I suggested.

She thought it was a great idea.

My parents came to this country without ever imagining that one day they would dare to desire, never mind afford, a nice watch or bag. When we lived in China, we were in a room the size of my current bedroom, sharing a bathroom and kitchen with twelve people, showering with limited lukewarm water while someone pulled open the mildew stained shower curtain and asking to quickly rinse a basket of dead fish. I remember sleeping on bamboo mats to stay cool and breathing in the musky smell of the old floors in the summer. I know that after my parents came here, they spent years looking down at the ground under their feet and working, walking one hard step at a time to advance their lives, and me, forward. By the time they finally look up, they couldn’t even realize that the blue skies and blooming gardens surrounding them belong to them. Years of grinding against the American Dream have made them forever humble, and frugal, and suspicious of excess. That weight of fighting for a living is buried into their bones, and they walk with it for the rest of their lives even as they enjoy the finer things in life. They carry their struggles mounted onto their backs, etched into their skins.

While I thought about the watch and the purse, I couldn’t help but smile at the beautiful, almost bittersweet irony of it all. My dad sold counterfeit watches and purses. Now, they are both in the position to own a real one. My mom will hug her Louis Vuitton closely to her and my dad will roll long sleeves over his newly adorned watch. Everyone who sees them will assume that they are counterfeit. No one will give it a second thought.

Except them, of course. Once in a while my dad will look down to check the time and smile to himself as he is reminded of those who bought it for him, who love him and who fought with him. My mom will run her fingertips over the genuine leather of her purse and softly click her tongue in satisfaction — no one else will know what a precious precious thing she has on her arms — the Real Louis Vuitton.