What Happened When I Gave Up On 27 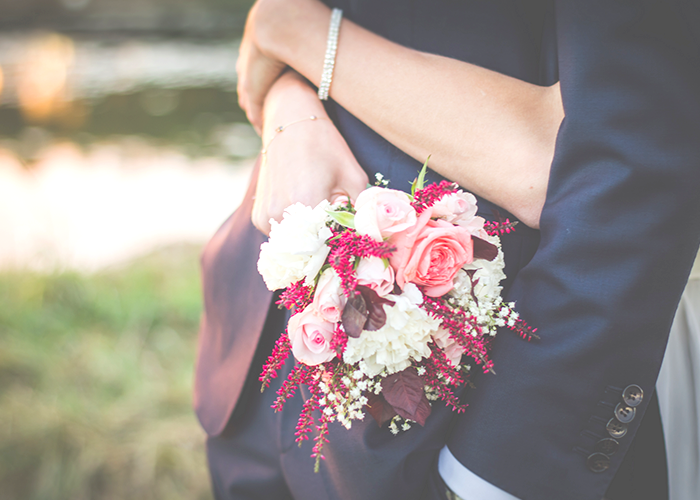 I always thought I’d be married at 27. It is, and always was, a very arbitrary age, but in the high school/college era of emotional maturity, when I decided it, it was at least partially based on concrete ideas — even if those ideas were always ridiculous. My parents were married at 24, and had me at 27. Since they have always been a very happy couple and enviable pair of marital role models, I wanted to emulate their path, and was sure I’d be married to the love of my life in my mid-20s. But I’m a more modern gal, I thought, and times have changed. Instead of shooting for 24 (which seemed, even then, much too young to be married), I set my sights on the age at which they had their first child, me.

Twenty-seven was a good age — it was sufficiently far from the 3-0, to leave me a bit of time to just be married before I started having children (because, of course, I’d also set an arbitrary timeline for the age I wanted to have my first child) — but it was also weighty enough to feel mature and adult. I wouldn’t be some child bride that everyone whispered about, I’d be a woman, walking down the aisle with certainty and conviction. I idolized the age, even long after I’d abandoned many other cockamamie high school ideologies. And of course, throughout my planning around all things 27, I didn’t have a boyfriend, let alone one I actually could see myself marrying. This was all in theory, totally devoid of context or logistics.

Today, I’m 27. I’ve been with a man for five years, a man I absolutely want to be my family someday, and with whom I talk openly about the prospect on a regular basis. But it’s not happening at least for the next year, because, as you might expect, life gets in the way. Instead of getting engaged last year, which we very much thought about doing, respectively, I started a business. It became the object of our spare everything — time, money, planning, excitement — that would have gone to an upcoming wedding. We are both, suffice it to say, thrilled to have started this incredible project together (and with a few other people) when we did, and have no regrets about our timeline. But it does mean that my arbitrary timeline will come and go, and things will have not at all gone the way I planned them.

In many ways, having something so concrete, like a business, puts us in a better position than most for explaining or shooing away the well-meaning henpecking from friends and family about when we’re going to TiE tHe KnoT, because we have been together for five years, and we are edging towards 30, respectively. It’s easy for us to explain why in a way that is clear and concise, and manages to stave off even the most insatiable extended family members, at least til the next holiday. But we are both very aware that if our reasoning was more vague, anything from “it’s financially a bad idea right now,” to “we’re just not interested in getting married,” the explanations (and the judgments) would be a lot more difficult to get through.

There has been a spate of breakups, recently, amongst several people I know (most of whom don’t know each other), all following a similar pattern. They are all about my age, give or take a few years, and were in long-ish relationships which, at one point, seemed possible to highly-possible in terms of ending in marriage. And for different reasons, with varying levels of drama, they each ended. These friends now all find themselves closer to 30 than they’d like to be while single “again.” And when I’ve spoken to them, almost systematically, they indicate that they had a timeline in a similar way to me. Maybe it wasn’t 27, and maybe it wasn’t even particularly marriage, but they had a very distinct vision of what they wanted to have and when they wanted to have it, down to a year. These expectations turned the breakups, already unfortunate on their own terms, into a kind of moral failing. They aren’t just single — they’re starting over

, at an age for which they had other things distinctly planned. They’ve failed themselves somehow, those former versions of themselves who were so sure what life would look like.

And it’s easy to see, when it’s someone else’s life, how deeply unproductive it is to hold oneself to arbitrary standards we created years ago, when we were entirely different people. It’s easy to say to someone, “You have to focus on living the best life you can today, with the life you have now.” But when it’s you going through the realization that the timeline you’ve mapped out for yourself has essentially been thrown on a fire, nothing seems like more of a defeat. It’s not even the singledom, or the unemployment, or the general life change that stings. It’s the fact that it’s happening when we promised ourselves it wouldn’t, when we were supposed to be these magically mature, all-knowing adults who Had Their Shit Together.

I’m a very different person than I thought I’d be at 27. There are things I haven’t yet mastered that I’d hoped I would, but there are also things that I’ve done that I never would have dreamed possible for myself. As many times as things haven’t worked out for me, there have been other, even greater things that have manifested in their place. I’ve learned the value of hard work and delayed gratification — two things that eluded me entirely until the age of 21 or so — and I’ve learned to replace quantity with quality in pretty much all of my human relationships. Overall, I’m proud of the person I am, and know that there are still yet things to accomplish before I put the cherry on the cake, so to speak, and commit to a life partner with a fun-as-hell party of some sort. I know better now the person I want to be, rather than the age I want to be, when that happens. Timelines be damned.

And when I hear friends — accomplished, brilliant, funny, beautiful, compassionate friends — speak about their romantic prospects as though they’ve passed some terrible expiration date simply because they are in their (gasp!) late 20s, nothing breaks my heart more. I wish that I could make them understand, the way I do, that there are so many wonderful things that they refuse to take pride in, because they haven’t crossed other, entirely arbitrary goalposts. When they speak in terms of lowering standards and becoming “more realistic,” I want to shake them by the shoulders. When they talk about being “still single,” I want to correct them with “single,” no depressing qualifier. I know, though, that the power of the ages we hold in our head is much stronger than anything a friend could tell you over a glass of wine, most likely.

But that doesn’t mean we should stop trying. Because I know that when I gave up on 27, and tuned out the expectations everyone was heaping onto that age, as well, I was able to concentrate on all the other things that happened along the way, things which I never set a deadline for. I was able to see the things that I didn’t plan for because I didn’t expect all that I’d be capable of, because I was judging 27-year-old Chelsea by 21-year-old Chelsea’s capacities and drive. I didn’t realize she’d be a totally different person. And maybe you don’t give yourself permission to be the person you are today. Maybe you only see things in terms of the things that didn’t happen, instead of the things that did, and it’s leading you to shorten the timeline of all that is possible in life to a comically young age. Maybe it’s making 30 feel like some kind of a falling axe, instead of an opening door.

Maybe you have an age you need to let go of, and if you do, I hope that you give yourself permission to loosen your grip.