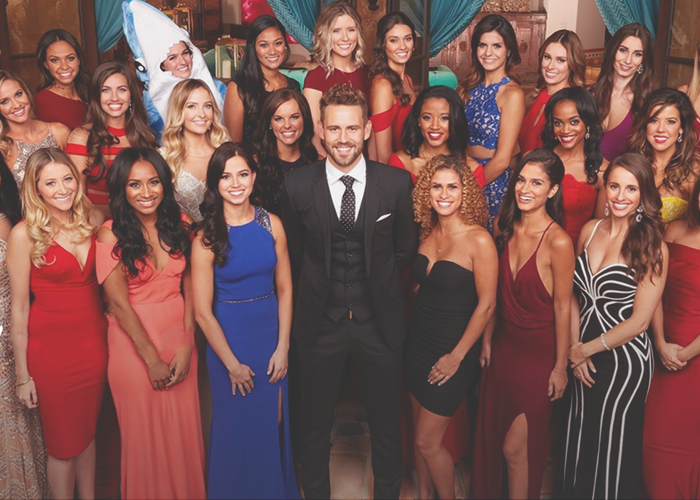 If you’ve been anywhere near network television for the past decade-and-a-half, you likely have at least some familiarity with The Bachelor franchise. In my own lifetime, I’ve gone from watching the early seasons with my mother, to ardently avoiding it as a teenager for fear of it messing up my ~cool~ image, to semi-secretly taking up watching it again a few years ago, to where I am now — hosting viewing nights with homemade pizza, while my friends and I check in on our fantasy league standings throughout the episode (our group name, which I’m so sad I didn’t come up with, is Monday Night Flirtball). I’ve gone from watching it as a preteen to being older than a cool 40 percent of the female contestants.

It’s not that I think it is the highest form of art, but I do find it entertaining, and a little fascinating. (And, of course, the pinnacle of weird and somewhat gross heteronormative ritual.) Somewhere along the way, I’ve learned that it’s okay to just like what you like and not apologize for it, even if you think it’s kind of garbage. So as TFD’s resident citizen of Bachelor Nation (sorry), I feel it is my duty to talk about one of the show’s most problematic aspects: how much GD money these women spend just to be a contestant on The Bachelor. I remember reading a while ago that contestants don’t get paid, but it’s more than that. They’re responsible for taking an indefinite time off of work — which could be more than two months, if all goes “well” — and nothing is provided for them. They wear all their own clothes, and do all of their own hair and makeup.

I was recently reading this Refinery29 article about how much the female Bachelor contestants spend in preparation costs for the show (mostly beauty-related). They reached out to some former contestants to get a glimpse of what they each spent before embarking on her respective season, as well as all the perks that came with being on the show. I definitely recommend reading the whole article, especially if the idea of living with 20 other people in a mansion in Southern California with no air conditioning terrifies you as much as it does me. Here are some highlights:

Beauty expenses: anywhere from hundreds to thousands of dollars. Some of these women were likely paying a lot for their personal beauty maintenance before they ever even considered going on the show. That being said, they still seem to spend a significant amount getting themselves camera-ready: three of the women quoted in the article mentioned having lash extensions, which can cost well over $200 at a salon (even though you can get a decent-quality at-home kit

for less than $10). The women quoted also mention getting Botox, HydraFacials, and dermaplaning, which can easily add up to thousands of dollars.

Many of the women quoted mentioned investing in contouring makeup

for the show’s various iterations, especially if they’d already seen themselves on a previous season and weren’t happy with how they appeared on camera. It’d be almost impossible to get an exact average of how much the women on The Bachelor spend on beauty, but according to Refinery29, “Most of the women say it’s easy to drop $1,000 on beauty-related expenses alone before filming even starts.”

Months of personal training. Again, a lot of the women (and men) on these shows seem to be already pretty invested in their physique, and they likely make time in their lives for fitness already. But paying “a personal trainer five days a week for the eight weeks leading up to the show,” as one former contestant mentioned she did, will certainly add up, no matter where in the country you live (even if you’re not paying $400/hour for a celebrity trainer in LA).

Evening gowns & other new clothes. If you’ve watched the show, you might remember the rumor that Olivia from Ben Higgins’ season reportedly spent $40,000 on her clothes. She publicly denied that, but Jillian Harris, former contestant and later the Bachelorette of her own season, blogged about how she spent about $8,000 on clothes and had re-mortgaged her house (!!!), and there have been other mentions of women cashing in their 401Ks in order to compete on the show. That seems insane, but when you consider that these women are supposed to wear a different evening gown (or, at least, a fancy dress) for each rose ceremony, and that the only show-provided ones are for the final two contestants, the financial undertaking becomes a lot clearer.

But duh, perks. Of course, the contestants get a fair amount of free shit upon the beginning of their ~journey~ — they mention a goodie bag filled with everything from designer jeans to swimsuits to fancy skincare products

. They are put up in a beautiful Malibu mansion (albeit sharing beds with one another, with no AC) with a fully-stocked kitchen, and their dates are obviously paid for, eliminating their food and entertainment spending for the time they’re filming. But since they aren’t allowed phones or internet access, that also means they have to come prepared for whatever may happen — no ordering forgotten essentials from Amazon. And, when they’re on (most likely unpaid) leave from work, I think the costs would have to outweigh the benefits, at least financially. If you want to be a contestant on The Bachelor, you should at least know you can’t pay a car payment with a designer bikini.

It’s important to note — as Refinery29 definitely does — that the costs of being on shows like this are certainly felt more for the women than the men. And The Bachelor‘s upholding of generic standards of beauty are definitely on par with its outdated views on what someone’s romantic life should look like, so that’s not exactly surprising. But it’s yet another example — in entertainment or elsewhere — of how much more it costs just to be a woman, especially one that society says you’re “supposed” to be. As far as I know, this season is the first with an openly bisexual contestant (yay Jaimi!), and considering how much the show values traditional, heterosexual (and white) engagements and weddings, watching that unfold — extremely casually, in my opinion — felt like a pretty big step forward. (But it will likely prove to be a footnote in Bachelor history, sadly, rather than the start of a big, progressive move on the show’s part.)

A lot of former Bachelor/Bachelorette contestants have gone on to have relatively successful careers in entertainment, which is not shocking, considering you’d have to be seeking a little public attention, if you’re willing to go on this type of show and put yourself in the position to be completely picked apart in tabloids and social media on a weekly basis. I’m obviously entertained by the show, so I can’t judge. They just have different values than I do, and that’s totally fine — and if their goal is to get in the limelight for a few minutes and help boost their own entertainment careers, going on a show like this is maybe a worthwhile gamble (though that’s a very light “maybe”). But I also think it’s important, as a viewer, to keep in mind all the costs that come with wanting to be a contestant on The Bachelor. Because even with all the jealousy-inducing perks — and the potential of “finding love,” I guess — I think it’d be a less-than-positive experience for many people. I’ll gladly take a look from outside in, in my sweatpants, with a bowl of popcorn, not cashing in my retirement savings for a few minutes on TV.