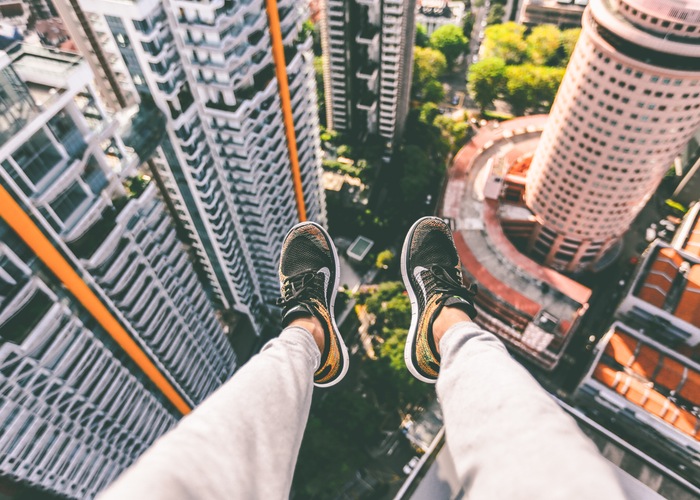 My parents like to joke that I was an incredibly obstinate, difficult child who shouted, “NO!” from the rooftops the second I learned the word. They show photos of me in footed pajamas, grinning with jack-o-lantern teeth, and tell people that I’m beaming because I had just declared, “No thanks!” to bedtime. My mom regales everyone with an overly dramatic story about how one of my favorite sentences at age three was, “You are not the boss of me.” Apparently, I loved saying “no” as a toddler, but that quality didn’t stick as I grew up.

Throughout high school and college I was always the girl with a jam-packed schedule. I have had a job since I was 15, and I’ve never been without one, except for briefly during the semester in college when I was taking two classes above the maximum workload. My “lazy weekends” have always been filled with chores, errands, extra work, or meet ups with friends. I’ve always been involved in multiple activities and side projects and have frequently woken up in a panic, thinking I failed to complete something.

I’ve hidden this inability to turn things down under the guise of, “I’m just one of those people who is BETTER at being busy.” And to a certain extent, that’s true. I don’t like spare time because I have a short attention span and get bored. But I often cross the line from “being busy” to “taking on too much.” Essentially, I have a problem saying “no” to things.

Just the other day, I was sitting down and talking to a friend as she approached near breakdown status from having too much on her plate. She was juggling two almost full-time jobs, and is a full-time business student. It’s no surprise that some things slipped and she cracked under the pressure. She called me in tears, wondering how she got to this place and what she was going to do. I advised that she had to cut back and say “no” to something. She had fallen victim to the trap I so often end up in. When we have amazing things come our way, we don’t want them to pass us by, so we take on too much. Then we become so overwhelmed with not having enough hours in the day to accomplish things that we buckle under the pressure until we snap.

I don’t exactly know where this problem stems from, but I have a few theories. For me, I struggle with setting my expectations for myself at an unrealistic level. It’s also that I suffer from hefty amounts of FOMO. I convince myself that I can do everything, which is simply not realistic. On top of that, there’s the fear that if I don’t do a project, someone else will get the chance, and the looming fear of, “What if?” makes me jump at everything I can.

Other times I feel pressured to say “yes” because I’m scared of letting others, not just myself, down. We want to impress people, to show our worth, or simply to help someone else accomplish a task. Or maybe we agree to add another thing to our already full plates because we just feel uncomfortable saying “no.”

But I am often left asking, why do we do this to ourselves? Why do we constantly feel the need to please people or push ourselves to a level of incredible stress just so we can do one more thing? Why did my friend take on too many classes with her already packed schedule? Why, for months, did I continue to write for sites that didn’t treat me well, and whose readers made me feel violated, just because I didn’t want to tell them “no”? Why do we hear a task from our boss that’s arguably unreasonable, and just mentally buckle down, instead of offering a more attainable solution? Even beyond the professional world, I struggle with saying “no.” I’ve gone on second dates with people I find boring in the name of being nice, or agree to plans with friends when I’ve really had a hell of a week and just want to stay home.

I think the biggest reason for my unwillingness to say “no” is simply that saying “yes” is easier. It’s nicer to be agreeable, and not challenge something, or someone. It’s easier to say “yes” in the moment without considering what comes next, or when you know it’s what someone wants to hear. Rejection, whether giving or receiving it, sucks.

But learning to say “no,” and doing it strongly and graciously, is something I had to learn to do. It’s physically, emotionally, and logistically impossible to do everything. Some things will have to go on without us and we have to learn to be okay with it. Maybe it’s a project you just don’t have time for, or a relationship that’s not worth the effort. Maybe it’s a brunch you don’t have room for in your budget for. Whether we don’t have the time, or the money, we need to just accept that saying “no” doesn’t make us any less successful.

I was recently asked in an interview what my biggest weakness was. I mulled over the options, thought about going the stereotypical route (“I’m just too much of a perfectionist, I just like working too much blah blah blah”), but decided to be honest. I admitted that I have trouble saying “no,” and I’m working on it every day. Sometimes I still fail and end up wanting to rip my hair out at 4 PM on Thursdays when I still have 11 unfinished pieces to wrap up, eight unanswered emails to get to, and I’ve promised to meet my friends at 5:30 PM. But other times I have the strength to say, “This just isn’t in the cards right now.” And that’s when I realize that even though I’ll probably have some FOMO about saying “no” to the activity, or extra task, that doesn’t make me failure. I’m slowly learning that, even though it’s not ideal, I really cannot do it all. And that’s okay.