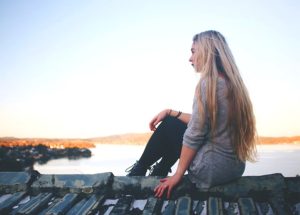 When you’re learning how to manage your finances, it’s easy to look back at past behavior and past spending patterns and cringe a little bit (or a lot, depending on the situation). I know, because earlier this year, I went through my archives as part of redesigning the blog, and some of my old posts are so cringe-worthy. But there’s a right way and a wrong way to look back on your money decisions, and while the cringe is a totally natural reaction, I want to share what I always say to friends when they relay their past money “mistakes.”

Cut yourself some slack

This all came up in a Facebook chat, where a good friend of mine made a comment I think we can all identify with once we’ve started trying to figure out money stuff. I honestly don’t remember what their particular “thing” was (it was probably coffee, it’s always coffee) but the statement was this general sentiment: “If only I hadn’t bought so much of that thing, I’d have thousands of dollars saved by now!” Spending is a tricky part of personal finance. It’s a huge part of how we handle money, but the emphasis in most personal finance spheres is on saving more and learning to spend less because yes, spending money is fun and easy to do. So once you’re in this world, the world of People Becoming Good At Money, it’s easy to look back at your past self and feel guilt, shame, or regret that holy heck, you spent a lot of money on that thing. You don’t need to feel that way at all. There are some parts of the personal finance world that encourage this kind of thinking to help you avoid spending money in the future. But I’m here to shatter some illusions:

1. You are going to spend money again!

2. You don’t have to feel badly about it!

3. It’s actually very damaging to feel badly about it!

This kind of train of thought (the guilt over past spending, and thinking about what could be if you just hadn’t spent it) is not only useless, it’s truly, deeply toxic. Here’s why.

1. It links spending and being “bad at money.”

For most of us, we spend a fair chunk of our income. Spending is what gets us stuff like shelter, food, and dogs — you know, the essentials. When we start to fall into the pattern of viewing all spending as bad, we’re setting ourselves up to see the majority of our financial decisions as bad. You can set up a whooooole lot of automatic savings contributions, and still not make as many “savings” decisions as you do spending decisions in a month. That’s a recipe for feeling bad about your money pretty much all the time. Is there value in spending smartly and strategically and in line with your overall financial goals? Heck yes. But spending in and of itself is not inherently bad.

You make the best decisions you can with the information and resources you have at the time. That is a fundamental truth I believe about people, and people very much includes past you! (And okay, fight me if you don’t think it’s true of everyone, but at the very least admit that everyone should be able to believe that about themselves.) When you focus on what you’ve done “wrong” in the past, you’re reinforcing that you have made bad money decisions before. It’s dangerous because most of us go pretty quickly from “I made a bad money call” to “I’m bad at money.” Reinforcing that view of yourself is deeply unhealthy, especially as you’re learning to get better! Maybe you wouldn’t make the same call knowing what you know now, but that’s the key: you know more now. Also, because it has to be said: You are not bad at money.

The worst part, as if those two things weren’t bad enough (they’re pretty heckin’ bad) is that it’s a wholly unactionable thought. Like, if you’ve got a time machine, maybe you want to use it to go back and buy fewer lattes — but I mean, please do something more fun with your time machine. Instead of focusing on your past behaviors and how wrong they were, focus on what they can teach you for the future, and use that information to put plans or goals in place.

Maybe you’re not at the point in your personal finance journey where you’ve already hit the guilt phase, and you haven’t had these kinds of thoughts about past spending. Maybe, and this is my greatest hope, you never will, because you don’t read those kinds of posts as I did! But if you (or a friend) ever find yourself thinking, “If only I hadn’t spent money on that thing. . . ” please, for me, stop yourself. Instead, try this on for size.

“Knowing what I know now, I wouldn’t spend money on that thing again, because I’d prefer to use my money for another thing.”

It acknowledges that sure, you maybe wouldn’t make the same choice again, but it also gives you room to keep making that choice if it’s something important to you. Like sure, I could probably tally up how much I’ve spent on Starbucks in my lifetime and be horrified. Or I could look at it as an expense that was sometimes out of sync with my priorities or my income, and one that I consciously choose to spend money on now because it improves my life. I mean, I know which one I prefer.