How I Got Stuck In The Habit Of Working Myself Sick 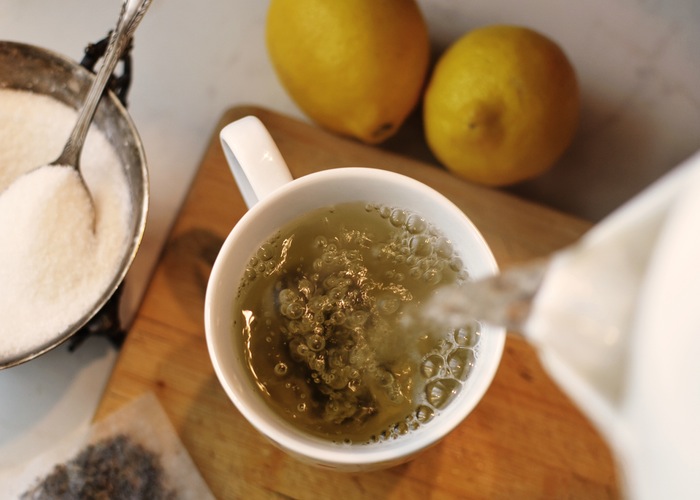 I was sitting in my office chair on the Friday before Labor Day weekend, wrapped in an orange scarf, and I couldn’t help but think, “What the hell am I doing here?”

My throat was sore, and raw from days of coughing, which I’d tried to combat with cups of hot tea, cough drops, and warm salt water gargles with very little success. My head was foggy and unfocused from the cold medicine I was eventually forced to take. My body was exhausted from juggling a 9-to-5 work schedule, a mother suffering from pneumonia, and a nine night family prayer vigil for my late uncle. My face was littered with stress-induced pimples, and no amount of color could hide my newly acquired ashen complexion. In short, I didn’t feel good, nor did I look good. But rather than being in bed sleeping the day away, I was at work finalizing meetings, and other small details for next week’s agenda. At what point did personal health come second to productivity?

In my case, there was never a time when it didn’t. Coming from an immigrant family, I’ve seen my parents struggle with completing their less lucrative 9-to-5 jobs while combatting colds, flus, aches and pains. My dad would limp around the house, with his gout-ridden foot, preparing the nightly dinner. And my mom’s coughs would echo in the night during harsh Chicago winters, the smell of generic lemon & honey cough drops wafting off her for days. This was the norm. They learned to work alongside the aches and pain because a paycheck, which afforded us our home and sustenance, was the result of their productivity.

I am no better than my parents in regards to the war between health and results. My track record is littered with moments where productivity won over health. In fifth grade, I went to school with a fever. That same fever sent me home a few hours later, with fire-rimmed eyes and shivering bones. Throughout high school, I would come to class with coughs that left me teary-eyed with semi-serious thoughts that I was dying. You would think this too if you felt like everything inside you was trying to come out with each passing cough. And all of this was done for the prize of an insignificant “A” marked on a piece of paper.

At one point in my last year of college, I had a two-and-a-half hour commute to my nine-hour student teaching position, while taking two classes and working a part-time job. I was stressed, sick, and ragged by the end of it, but in my head I vehemently thought: It will all be worth it. I was finally graduating from college (with honors) after five years of feeling like it was never going to happen. But more important was the feeling that I was finally an adult. Adulthood was marked by hard work, and the occasional pain that came with it. Adults work hard. My parents certainly did. And now, fast forward to me as an adult, pondering why I’m working myself sick for something. Wondering why I justify all the days I come to work with a headache or a cold, when I have ample sick days waiting to be used.

I get it. I do. Certainly, it’s okay to take a day off from everything, from work, school, responsibility, etc. But I also understand why we put ourselves through levels of extreme stress, even when we’re sick, in exchange for a level of success, or a prize we think is valuable. We’re taught to “power through.” We are working for something we believe in, and care about. My parents’ physical struggles have blessed our family with a decent life. The work I’ve put into my education has resulted in a degree. I may still struggle with the value of grades and paper degrees, but I will never regret having immersed myself in the practice of learning. And though it is too early to tell, I know my hard work now will result in something good. In fact, it already has— because even if it felt like an immense struggle to make it to 5 PM with a cold, there was a three-day weekend waiting for me.

Crystal is based north of Chicago and works as a senior administrative assistant at a medical school. All she wants is a life of books, music, movies, food, travel, and if the universe can manage, a wealth of love.