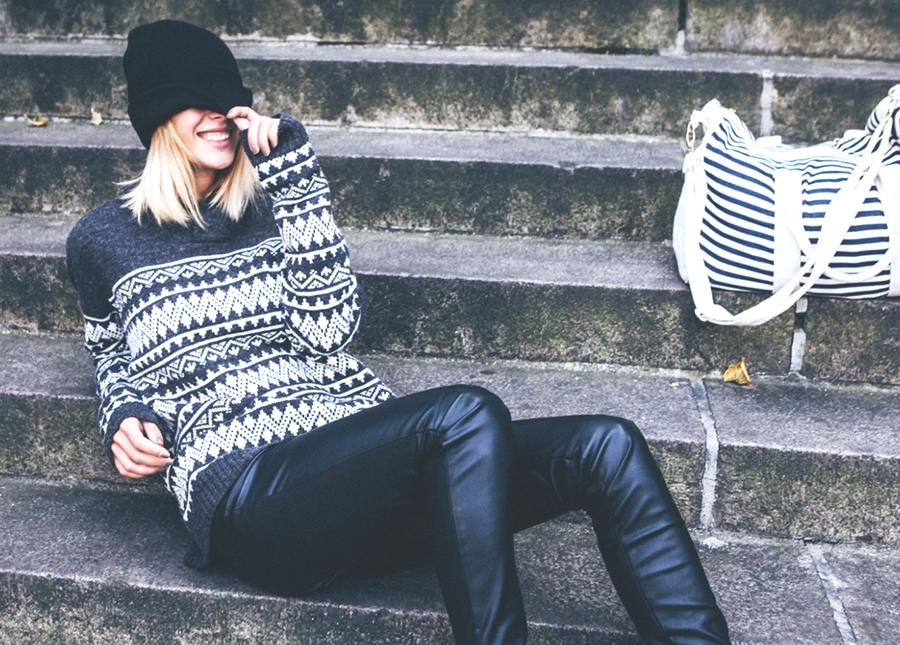 I don’t know who I am.
I mean, I sort of do. I’m a 27-year-old woman, sitting on her living room couch, wearing a pair of jean shorts even though it’s January in Toronto. I’m also patiently waiting for the vegan homemade pho my girlfriend is making me to finish cooking, so I can take care of the cold that I’ve been battling for the past couple weeks. Still, I wear a t-shirt and shorts. I don’t care.
Like everyone else who’s interested in becoming “better,” I’ve read my fair share of diatribes about how we’re all mindlessly numb, and whatever they’re selling is the answer to the problems that we didn’t know we had. For me, I’ve found three particular “ideologies” that I’ve adhered to the most: (a) stoicism, (b) minimalism, and (c) existentialism.
Stoicism has been modernized, simplified, and repackaged into cool coins and art prints by Ryan Holiday, marketing guru and self-proclaimed growth hacker. I’m not so sure when I first read Holiday’s writing but, as it seems to be the case for me, I admired his writing style more than his content. I despised his article on cultural appropriation, and even (politely) e-mailed him to tell him so (which he responded to and we respectfully agreed to disagree and to “keep in touch”), but I couldn’t hide my view that he was a brilliant strategic author, writer and…media manipulator. I also appreciated that, despite his fame, he lives on a farm and owns cows, donkeys, and a plethora of other animals. While I was being sold Ryan Holiday, I was also being sold what he was selling.
I was familiar with Stoicism long before I had heard of Ryan Holiday. When I was in high school, I distinctly remember heading to Chapters and purchasing a book that summarized the history of all the major philosophical movements to exist.  At the time, I found the notion that everything and every circumstance is inherently impartial — whether they’re “good” or “bad” is something we ascribe to them through our own interpretation. I found the parallel to Buddhism striking.

The main answer, I suppose, is to take everything at face value: stoicism, minimalism, existentialism, whatever-ism. As Paul Jarvis once stated, “Labels are for jars.” And I think that’s right.  This isn’t to state that we can’t take pieces of philosophies that we find agreeable, but at the heart,t it should do just that — fit into our lives, not the other way around. I know no other strategy that would get the most effective, and satisfying, results.
My feelings on this are mixed. I know I believe that the study of philosophy (a term used broadly) provides an immeasurable contribution to my life. I also know that the more I learn about different subjects, the more I am able to make sound, well-reasoned decisions (*notice I did not say “rational”). But, I also know that deep self-reflection is mandatory. Thus, a balance between the two is obviously required to develop a unique sense of identity. But I’m pretty sure that identity is irrelevant to meaning. Will my life have meaning once my identity has been formed? I’m not so sure.
I suspect that my thoughts can be summed up as this: identity is only tangentially linked to meaning. I identify as queer, but my sense of meaning — or purpose — does not necessarily involve being a queer activist. While rationally, my identity should affect my sense of purpose, and I’m sure it mostly does, it’s not a fluid process.
Self-growth is a booming industry. In 2008, Americans spent 8 billion dollars on self-help products: books, coaching, seminars, stress-management tools. Americans are, quite simply, not as happy as they once were. In 2007, the US ranked 3rd amongst the OECD countries in terms of “happiest countries,” in 2016 the US ranked 19th. According to Jeffrey Sachs, Director of The Centre for Sustainable Development at The Earth Institute, “The central paradox of the modern American economy, as identified by Richard Easterlin, is this: income per person has increased roughly three times since 1960, but measured happiness has not risen.”
While philosophy has been used a tool for centuries to help us make sense of the world, it’s only in the modern era that the commodification of philosophy has taken off. As I mentioned earlier, Ryan Holiday has become “that Stoicism guy,” the Minimalists have become “those minimalists guys,” and I’m sure soon enough there will be, “that absurdism guy,” and, “that existentialist girl.”
The point that I’m trying to make is that shopping around for identities is no different than going to the nearest mall and buying a pair of jeans from your favorite store, regardless of whether there’s another pair of jeans at a different store that’s cheaper and fits you better. We stick with what we know and use that brand to develop our sense of self. Just look at all the insane iPhone vs. Android debates that occur on Youtube whenever a tech vlogger uploads a new video.
There is something for everyone. And that’s simultaneously great and terrible. It’s never been easier to capitalize on a preexisting idea, repackage it, and reinvent yourself as a Thought Leader. Consequently, it’s never been harder to learn how to develop yourself, free from the barrage of self-help articles that flood your social media feed.
And so, I have to remind myself to be mindful. About the attractive Influencers who try to peddle you their life philosophy that works for them. About the carefully curated photos on Instagram that suggest that person has life figured out. About the 400-word article on Medium that promises to tell you how to be happy in four easy steps. Appreciate this content for what it is, but ultimately take it with a grain of salt. It’s all bullshit. Put in the work to figure yourself out. You’re an individual. Treat yourself as such.
Jennifer Chan is a lawyer and blogger. You can find her at jennifertchan.net where she focuses on connecting the dots between work, money, and happiness. She resides in Toronto, Canada with her girlfriend, full-figured rabbit, and deaf & blind cockapoo.