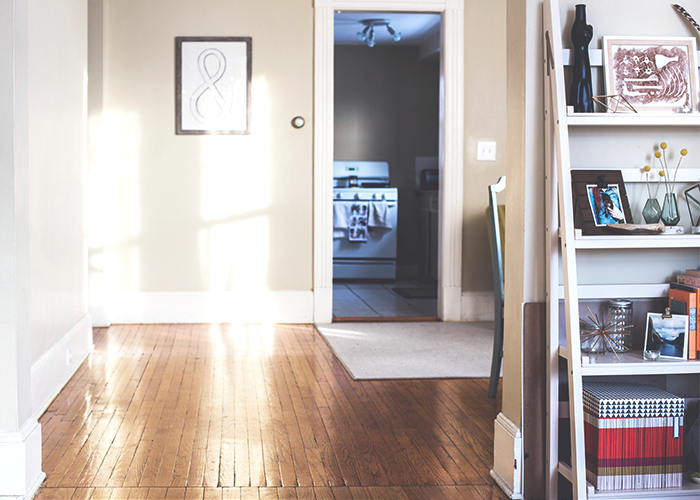 As I write this, I am currently sitting on my sofa, wrapped in three different blankets (it’s 20 degrees outside), with two backpacks at my feet — one that I actually use

, and one that’s old and that I need to get rid of, but that’s currently serving as a filing cabinet, because I have a bunch of papers and old mail that I need to sort through but have yet to do so. My two-foot-tall Christmas tree that I so carefully picked out and decorated

is still sitting on my corner table, waiting to be thrown out, and hasn’t even been watered for over a week, at least. My bedroom currently has three full trash bags of clothes sitting in one corner — which I’ve been meaning to take to Goodwill since October — stacked high enough that I can only see down to my knees when I look in my full-length mirror.

If you can’t tell yet, I have a lot of clutter. My tendency to leave things lying around is one of my biggest insecurities, and frankly, it’s something that I’ve up to this point been a little too embarrassed to admit here on TFD. I go throw spurts of actively trying to combat this habit, but I somehow always regress — life gets in the way, or so I tell myself. I convince myself that it’s hard enough living in a small New York apartment, with roommates, so I therefore don’t confront the problem.

But the truth is, having a living space that is cluttered and messy most of the time makes me dread spending time in it. And spending time at home is something I have to like, because I’ve been working mostly from home for nearly a year a half now.

I’ll be neater when I have more space. It’ll be better when I can have an actual desk

. My bed will surely be made when I have enough room to walk all the way around it. These are all the sort of half-promises I make to myself whenever I feel overwhelmed by yet another pile of ~stuff~ that I need to take care of. I think, eventually I’ll get to move somewhere new, and maybe I’ll even have a dedicated office space, and I won’t have roommates I have to share space with, and it will be wonderful. But of course, I have no real idea when that day will be. It makes no sense for me not to better my home situation now.

And honestly, I know I can be better. I spend roughly half of my time at my boyfriend’s apartment, where this has proven to be true. To my own credit, he has a lot more space (and closets on closets), making it easier to kind of just find a place for something and have it all fit. And to his credit, he’s just a naturally tidier person than I am. But when I’m there, I put much more effort into small acts of tidying up, like making the bed, folding the blankets I used on the couch, and emptying the dishwasher when it’s done running, not just when I need to free up space for the dishes in my sink. (Okay, and full disclosure, I leave my fair share of things lying around, but I’m much better at putting them in a dedicated space than I am in my own home. Peter will probably read this, and I don’t want him to call me out on a half-truth, because who has time.) I end up staying there for several days in a row, since I can often work from anywhere, and it’s so nice to be in a space that’s neat enough already that it doesn’t give me anxiety (and also where there is a cute cat and a ton more natural light). The biggest realization I’ve had from spending so much time in an already-neat apartment is that it is much easier to keep a space tidy when that’s how it’s started.

Last month, I made a “master plan” in my bullet journal, detailing all of the areas of my apartment that I need to tackle: under my bad, the top shelf of my closet, our two bookshelves, my mixed-up mess of a jewelry box, the cluttered windowsill behind my bed. I was going to take a few afternoons over the course of the month to tackle a few spaces at a time, to make it more manageable. I spent an evening clearing out and cute-ing up my nightstand, and clearing off and sorting through the stack of books and papers on the radiator next to my bed (before you panic, it doesn’t work/do any “heating”). I threw out so much crap I didn’t need anymore just from those two teeny spaces, and I even framed some old, pretty wrapping paper I’d had sitting around (side note: truly my favorite small decorating hack — framing

greeting cards and gift packaging). I was so happy. I even took a photo and sent my mom a picture of the neat little space, because I knew it would make her smile but I also seek validation.

Of course, that ended up being the only part of my big plan that I ever accomplished before the year came to an end. Time got away from me, I guess. I have to be kind to myself, because I know some things just aren’t in my own control, like losing my grandpa, which necessitated an unplanned trip to see family and attend the funeral. And while I certainly take care of my belongings better than I did in my adolescence and college years, the clutter is getting to be a constant source of stress. If I don’t take care of it now, when will I?

I have to think in the positives: When I clear out all these bags, for example, my room will feel so much bigger. I wish I could bottle what it feels like to climb into a neatly made bed at the end of the day, because then I would at least have that little reminder to motivate me. And I can only imagine how much more productive I’ll be if I only have work to focus on, and not all these household tasks I keep putting off, and piles of clothes taunting me from corners in the other room.

Maybe it’s wishful thinking, but I truly think I’ll be better and ~neater~ once I actually get my shit together and clean out my damn apartment, finally. Between my clean lil side table (which still is so) and my experience at Peter’s apartment, I already have some proof that I am capable of keeping a place neat. I want to want to be excited to spend time in my own place every day, but I know I have work to do before I can actually get there. So now that I know spacing out the work just won’t cut it, I’m setting aside next weekend — no plans out, no taking on extra freelance work — and getting it done.