How My Bathroom Ceiling Taught Me To Stand Up For Myself 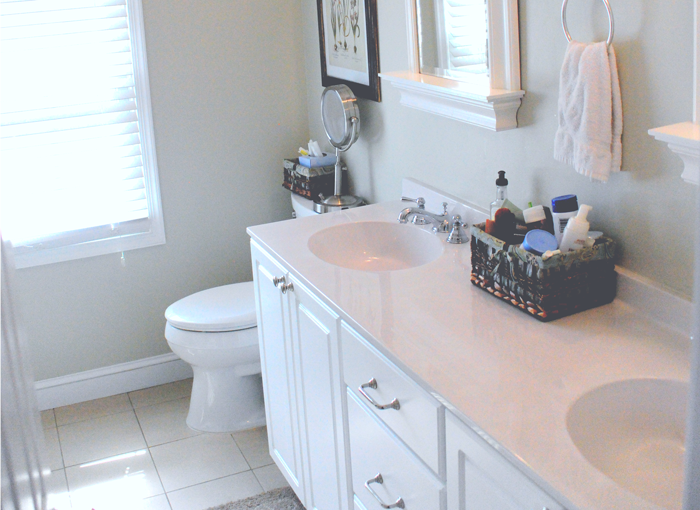 Two panels of my bathroom ceiling collapsed this morning. Though someone was in the shower when it happened, luckily, no one was hurt. It was also no surprise, as we’ve been dealing with a minor leak in our ceiling for the past several weeks that seemed like it would inevitably result in some minor catastrophe. Lo and behold, now we are dealing with a temporarily unusable bathroom and a steady stream of people coming in and out to fix the problem.

The truth is, since I’ve moved out of my parents’ house six years ago, I’ve never been in an apartment situation that wasn’t at least somewhat marred by neglected repairs or quasi-dangerous conditions. One studio in Paris had a washing machine in the bathroom that would lightly electrocute you if you touched it while wet. Marc’s apartment with his roommate that I lived in for a few months had a refrigerator in the bathroom (lol). Our one-bedroom in Williamsburg had a broken doorbell for 1.5 of the two years we lived there. This current place had a drip, drip, drip in the upstairs bathroom that eventually led to two missing panels in the ceiling.

This sounds bad, and it is, but I’ve also always chosen expensive cities and (usually) old buildings. They have the charming double-door windows in Paris, the exposed brick in New York. But this often means that, in addition to all the things that make them wonderful, they come with handfuls of problems that newer units wouldn’t have. (And since these are super-competitive rental cities, your landlord knows you are replaceable within a few days. People would fight over your $2200 studio with exposed wiring and a stove that won’t turn on.)

Partially because of this sense of replaceability, and partially because I can often be a bit of a pushover when it comes to people of authority, I’ve never made a stink about the objectively not-okay things going on in my apartments. I dutifully walked up and down from the fourth floor every time someone was downstairs at my old apartment, because I could no longer buzz them up. I got shocked a few times when getting out the shower in Paris. I put a Tupperware under the small drip, drip in the upstairs bathroom for the past few weeks, timidly calling the various people responsible for fixing it.

But when the panels came down today with a loud, terrifying thud, I felt a certain kind of righteous anger for the first time. God damnit, why had I spent so long putting up with these issues when it was more than within my rights to fight for a safe, functioning living space. Just because the New York rental market is essentially the Hunger Games doesn’t mean that I should be risking being knocked unconscious by drywall while using the bathroom. It shouldn’t mean that I should accept a non-functioning doorbell or only two of four burners that work as just part of my NYC experience. I have a right to argue for these things, and to be a (respectful) pain in the ass until they happen.

As soon as that panel fell, a fire was lit within me, and as Marc dutifully took pictures and sent an email for the paper trail (while giggling to himself because, on some level, lol), I got on the phone and called everyone who hadn’t taken me seriously the last five times I called about the dripping. I told the landlord’s office, forcefully, that we needed someone over that day to enact repairs, or my next call would be 311 and the landlord. I called our broker to her know what had happened (partially because I’m still salty over her getting over four grand to do the absolute minimum, and not verify several things before we moved in). I called the building manager, and the super. I called my mom — currently finishing up significant renovations in her own Harlem apartment — to make sure I was doing things right.

I stated my case clearly, and made everyone understand that while I’m not here to make enemies or yell at anyone, I was also not going to live in hazardous conditions because I was too nervous to step on toes. And I realized that this tone, this “you have an adult on the line, not a goddamn little girl who wonders if you could maybe repair the home she’s paying a shit ton of money to live in if you get a chance” tone, is something I could have always had. I could have called my other landlords this way — being kind and considerate the first time, but by the third, not taking no for an answer and making them understand that this would only get shittier for them if they continued to be negligent.

It’s up to me, and I think I’m not alone here, to get over the hurdles of socialization and personal anxiety that lead me to not take myself as seriously as I should sometimes, or arm myself with what are inarguably my own rights. It’s up to me to look up the laws in my area and find out what options I have when I need to protest or demand something, and to know what the next step should be if I’m not getting the results I need. It’s not unfair or “bitchy” to threaten to take legal action, it’s exactly what you need to do when something is not being done. City agencies are there to protect us, and to slap your landlord with fines and MAKE it their problem if they don’t deal with something, and that’s because we don’t want to be living in Victorian tenements where people are dying of TB left and right. We should be beyond that, and we should all stand up for ourselves.

As I write this, the bathroom is being properly taken care of, and I’m deeply happy and relieved that I won’t have to take this any further if all goes well. I adore my apartment, I adore where I live, and I know that the chances of finding TFD a better office than the one we have here in the city is as close to zero as possible. I have no desire to move, or to get into some protracted battle with my landlord over rent we shouldn’t have paid. But I also know that, no matter how much I don’t want to make waves — or how much I might love my exposed brick, and my two floors — that can’t cloud my ability to fight for myself, and to live in a safe and clean home.

I have to stand up for myself, and deal with problems like an adult. And I have to start doing it before ceiling panels collapse during a shower.