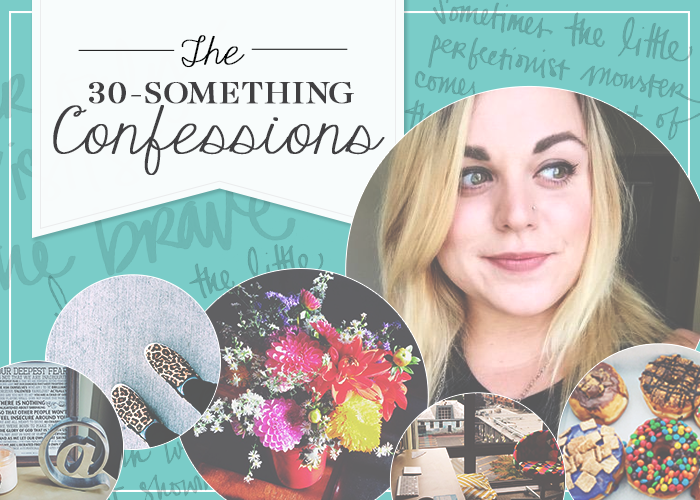 When it comes to words that can strike anxiety and panic into even the most even-keeled young adult, “personal finance” is probably pretty high on that list. It’s easy to feel overwhelmed, even threatened by the idea of being good with money, and I was definitely one of those people myself when I started this blog. But no matter how stressed out money might make you, it’s important to remember that your financial anxiety doesn’t make you weird: money is actually the leading cause of stress in America, and unless we take the leap and join in on the conversation about it, that won’t get any better. And Umpqua Bank has started that conversation, getting their community talking about these taboo topics – something we want to continue here at TFD.

Umpqua’s Made To Grow campaign was the perfect reason to start talking about some of the more human aspects of finance, so we’ve joined up to bring you this special miniseries on TFD. I’ll be talking to three driven thirty-something women about life, money, and how they make it all work.

This week, I’m talking to Jamie Varon, writer, graphic designer, web designer, and former head of Shatterboxx, a boutique web design firm that created out-of-the-box sites for a huge array of clients. She’s had several careers and lived in several countries in the time most of us take to find our first office job, and as she turned 30 this year, has had plenty of time to reflect on what she wants to keep, and what she wants to improve.

She writes frequently about stress and anxiety, especially as we navigate our 20s, so I sat down to talk to her about what advice she’d have for those of us still figuring it all out.

Chelsea Fagan: Looking back at your 20s – because I know you recently turned 30 – do you think you were relatively/comparatively good with money, compared to other people your age? Do you think you had a comfort around it?

CF: You mention that you always kind of had multiple and alternative jobs, and I know that you owned your own business. You write a lot about stress and anxiety – how they impact your life, even your financial life – do you think that some of this stress/anxiety was self-imposed because you never took the simpler route to earning money?

JV: [Laughs] Yeah, I think so. Because right when I got out of college, I started running my own business, so I think that from the beginning I felt inclined towards that high-stress environment. And even when I would try to budget or save at that time, one month I would get a huge check and the next month no checks at all, which made me have to dip into what should have been savings. So it was always high-stress in that way.

CF: Did you decide you want to own your own business, or did that kind of present itself?

JV: It actually was the result of a series of events. At the time, I was trying to get a more traditional job in the tech sector, and through my work in web design started picking up enough web design clients for freelance work to pay the bills that I thought, “Why don’t I just do this full-time instead?” And shortly after, I wanted to move to Rome, and I knew that I couldn’t do that with a more traditional job, so it seemed like an obvious fit for me to be self-employed.

CF: So you lived abroad – did you find that that experience increased your stress around money, or helped it in some way?

JV: It definitely didn’t increase it, which I know might not sound obvious, but the thing is that I feel stress around money most when I’m spending on things that I know I don’t want to be spending on. I get a lot of anxiety around the feeling of wasting money. And so even though I was in Europe at a time when the dollar was very weak, so I was automatically taking a pay cut, I felt less stressed than I had at other times living in America because every day, my life there was something that I was happy to be doing and excited to be working for.

CF: That’s interesting. So if your stress comes from moments when you’re spending on things that don’t really make you happy or that you don’t really want, what have been some of those things?

JV: Well, for one thing, living in Seattle this past year was not making me happy. I was in an apartment that was more expensive than what I was paying in LA (for something that made me much happier), and I felt a lot of anxiety around having to work so hard for an apartment I didn’t even like. There’s always an emotional component to money for everyone, but I’ve always felt it very strongly because my time is very directly tied to my money as someone who is self-employed, so it’s very palpable to see when I’m wasting on something. I knew pretty much from the first month that I wanted to go back to LA, and by the eighth month I moved.

CF: I think that something really important in terms of stress and money is people’s feelings that decisions are final, especially when it comes to big decisions like moving. A lot of times people feel that a move has to be a permanent choice, or that they can’t change their minds about it, or that it would be some kind of failure if they did. How did you get over that, and make the right choice for you in that case?

JV: Honestly, at first, I did have many moments of “Moving cross-state twice in eight months? This is gonna look crazy.” I knew I would look like a crazy person, or that some people would judge my choice. But then I realized that, ultimately, I’m the only person who has to live my life, and be happy with what I do, so who cares what they think?

CF: Do you think that this ability to not care what others think, or at least to rationalize it in your mind, was what allowed you to start your own business?

JV: Yes, because I think to start a business you have to trust yourself pretty much implicitly, and you have to be prepared to drown out whatever negative things are going to cloud that. It’s the same for being freelance. There are always going to be people who have something to criticize, or people who are easy to compare yourself to, and to be your own boss you have to be able to decipher what is valuable and what is not worth considering. You have to trust that inner voice, and I’ve used it a lot in my life for non-work stuff, too, like moving.

CF: What was the time in the last decade you felt the most stress about money?

JV: I was always lucky in that I was successful, for the most part, in my 20s, so I didn’t have to worry about money in the same way a lot of people did. But at 28, when I transitioned careers into writing and had to build myself up again like I had out of college, that was a huge hit to that sense of security. I had to find a new way to generate money, and I was also competing with people much younger than me – in some ways it was easy to resent not getting an earlier start, because when I was 20 there really was no place to write on the internet professionally, the way there is today. And so I today can see someone much younger than me doing much better, or getting better deals, and feel insecure about that, but I always have to repeat to myself that starting late is not the end of the world, and what would my other option be? Not writing at all because I am not as far along as I should be? That would just mean I failed automatically. I have to try, I have to put myself out there, even if I have to build myself up from zero.

CF: You write a lot about the importance of not comparing yourself to others, and to remember that your mistakes are not as bad as they seem. To forgive yourself when it comes to career/life/money, essentially. How have you been able to do this in your own life?

JV: I think the only thing you really can do to get out of your head in those moments is to just take small, tangible actions on your ideas, to make little bits of progress where you can. And you also have to assess, honestly, what really makes you happy internally as opposed to what other people are impressed by. You can’t confuse those things. Some of the stress is valid, but so much of it also stems from this feeling of “I should be doing this, I should be at this point.” And it’s so arbitrary, really, and even when it can be overwhelming you have to learn to really separate what is meaningful to you, and what is outside noise.

CF: What would you say to someone in their 20s who is looking to do some of the things you did – live abroad, start a business, freelance, change careers, work outside the US, etc – but who feels trapped by the inherent risk or danger in it, or who doesn’t feel a level of confidence?

JV: I would say to remember that no matter what you do, there is going to be stress. At any job you work, even if it’s a more ‘traditional’ job, you’re never going to escape the element of risk or anxiety. It seems more comfortable, but there is never a perfect decision that eliminates all chances of it going bad – even if you had a wealthy spouse, you would have the anxiety of depending on someone else. So the idea of ‘the safe, comfortable route’ and ‘the dangerous route’ is a false dichotomy. Everything has its risks.

And I’ve always chosen to live by following these ideas and passions and not worrying so much about what might happen because I know that even if I fail – and I’ve failed, or things have not worked out – I can look myself in the mirror and say that I did it, and that I chose it for myself. It was not something I did because I was supposed to, or because someone else wanted me to. So that has to be a driving force in keeping your stress down. I meditate, yes, but I also carry that spiritual element into my financial life – I have always gone into things saying “I believe in myself, I know this will work out, and I’m going to work to make it happen,” and that’s the attitude that’s allowed me to be at peace with a lifestyle where I had a fluctuating income, or I did change careers. It’s not perfect, but I’m never going to get rid of that stress, so I have to make my choices on my terms.

To keep the conversation going, check out madetogrow.com, and check out the Open Account podcast hosted by SuChin Pak. Let’s talk about the things that stress us out, and realize that they’re probably not as scary as we think – and that the first step to getting better is probably right in front of us.