How To Save An Emergency Fund & How To Leave A Job 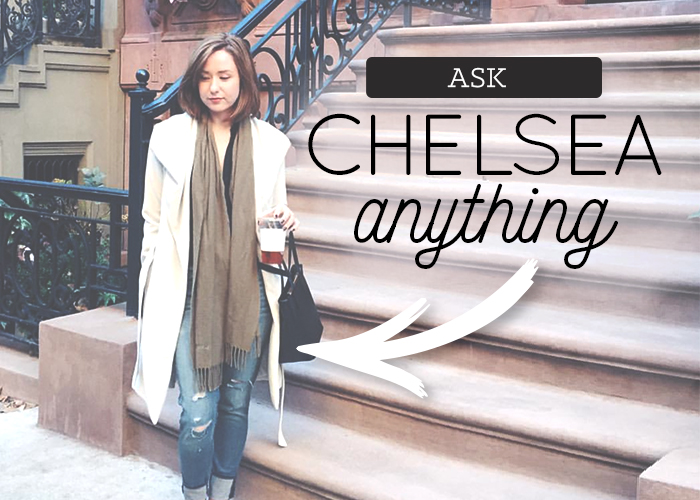 In our inaugural edition of Ask Chelsea Anything, I’ll be tackling two very different (but very important!) questions. One is from a reader who wants to know how to save, and another is all about the art of leaving a job. So let’s get to it, and don’t forget, if you have a question for me, send it to askchelseaanything@thefinancialdiet.com.

I know how important it is to have an emergency fund, and make that a number-one saving priority. However, since starting my first full-time job in September I’ve put away big chunks every month and am not seeing the results I want. Do you and Lauren have suggestions for HOW to quickly create an emergency fund of somewhere between $6-8,000? I’ve seen your videos and read the articles about why it’s so important to have an emergency fund, but need a little guidance on how to best make that happen– what percent to save each month, what to cut out of my expenses to make it happen, etc. Can you help?

This is a good question, because having an emergency fund is pretty much one of the fundamental tenants of being a functional adult. As someone who has been to many check cashing places, had to borrow money many times, and has generally experienced her life going to shit because of an unintended expense when I was broke, I get how important it is. But despite this, I am still not where I need to be in terms of my fund (I have a couple grand, would like five figures so that I can cover myself and Marc if anything happens, I admit that him having robust savings has made this feel less urgent). That being said, having a few thousand dollars is light years away from where I was even a few years ago, when it was inconceivable for me to have money in my account that I was not actively spending on shit I didn’t need.

And to that end, I’ve found that — for me — there have been a really key few points to saving up.

First, I think the idea of doing it in big chunks out of your paycheck is a little backwards. I think when you do anything in extremes, financially, you are bound to fall off the wagon (as with a food diet, a financial diet must be sane and sustainable). So my first tip is to do it in smaller increments out of your paycheck and, most importantly, have that money automatically deposited each time your check hits (instead of manually transferring it, because the key is to not see and therefore get used to that money). Doing it in a smaller percentage of your overall check is better because, even if it takes a year or two to get what you need, you at least know that it’s manageable and something you can adapt to as a lifestyle.

When it comes to saving big chunks, I’ve found that a good way to do it, psychologically, is to take on a few extra projects whose earnings go directly to savings. It’s always been easier for me to say, okay, I’m going to do this extra job (let’s say it’s babysitting, for example) X times per month, and all babysitting money goes straight to savings (or towards a specific goal). This makes it easier for me to put those big chunks away, and also motivates me to take on those extra side jobs I might not, if I didn’t have something very concrete in mind to do with the money.

And as far as what to cut out, I like the idea of doing challenges for a determined period of time, as well as going through and seeing the things that would be painless to swap out or eliminate entirely. For a nice challenge, try an entire season without any new clothes (as well as a closet purge), or do 30 days without eating/drinking out. For things you can swap, I like to start by seeing what things you can buy generic, or what things you aren’t actively using (Mint was very helpful in me understanding where I was overspending). A combination of both is, for me, most sustainable, and doing the more overarching challenges helps you add to the second column, because you get a better idea of what you think you need, but don’t really. I started by doing a closet purge, and ended up pretty much unintentionally doing a year without fast fashion. You can create habits, and can also build off the lifestyle you already have.

For me, saving has been all about diversifying where I cut, and where I add. Some people are good at leading a really ascetic lifestyle, financially, and challenging themselves in a purely financial way. I’m not one of those people, but I do find that a mixed approach — even as a first-year entrepreneur, as I have been — allows for healthy savings goals to be reached.

Have you ever left any job without having one lined up? What advice would you give to someone who’s really unhappy at their job but also scared to leave without a new one?

I have left pretty much all of my jobs without one lined up, because most of my jobs as a ~youth~ I was fired from and/or quit on a whim, and, as an adult, I quit places to go freelance. (Usually, when freelancing, I quit only when I had enough basic income from a few different clients, but it was still risky nonetheless.) I was extremely irresponsible about my jobs until about the age of 21, and that tied heavily into my crust punk lifestyle that involved a lot of check-cashing places and cars I bought for $800 whose brakes didn’t work (this is 100% true, and as terrifying as it sounds). Either way, I lived in a YOLO way that was in absolutely no way advisable for a long time, and only through luck, I managed to escape it all relatively unscathed, save for a decimated credit score and no savings, as well as some former employers at shit jobs who almost certainly hate me.

All that to say, given my experience, I would not generally advise quitting a job with NOTHING lined up behind it.

But this doesn’t mean that you have to quit with a job that is societally perceived as “exactly comparable” to your current position in place. A lot of people feel that the idea of quitting without the absolute perfect position is impossible, and that’s part of what leads a lot of people to spend a lot of time at 9-to-5s that are outwardly impressive, but which they hate, for a miserable amount of time. They think that any option that isn’t equally-perfect will brand them a failure, or be simply too terrifying to take on.

I think, mentally and professionally, a good middle ground is to look at having some employment that will ensure your financial safety, as well as something lined up that is directly for your professional improvement (or potential evolution, if you’re looking to change industries). For example, I had a good friend quit a “prestigious” job this year because she wanted to move, and potentially change positions, and she lined up a few freelance gigs in the industry, as well as a supplementary part-time job that was not in the industry (I believe it was nannying), which allowed her to make the transition on her schedule. She’s now, months later and having moved, interviewing at places and potentially starting in a slightly different industry.

The key was that she never stopped developing herself, adding skills, and having tangible projects to work on. Importantly, she also never endangered herself financially (this was preceded by several months of saving, on top of her nannying gig). I think that the idea of going from salaried job to salaried job in every case is not always productive, and while it’s great if you can make it happen with a job you are happy with, if you are desperately unhappy in your current career, it might be an opportunity to explore other options and see if there are other skills you can actively develop or industries you can explore.

I think there is a big pressure around having the job lined up, instead of a job lined up, and that is what trips a lot of people up. If you are as unhappy as you say, it’s probably time to really confront why you feel that way, and if another job doing something very similar would really be a long-term answer. And while I don’t ever think you should swan dive without a deep body of water underneath you (as I have often done to my own detriment), I also think that body of water doesn’t necessarily have to look like exactly what society believes it does. What matters is just that you have something to break your fall.