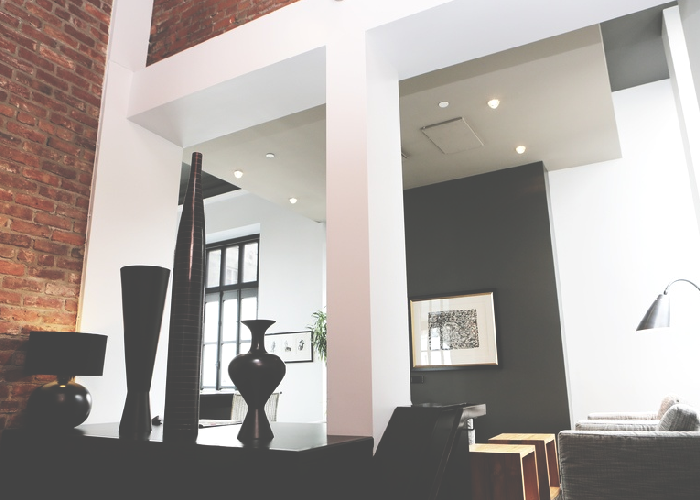 A few days before we moved to Harlem, Marc and I were walking home to our apartment in Williamsburg when we stumbled on a leather couch sitting, lonely, on the sidewalk in front of a nice apartment building. There were a few other items around, all seeming to be of high quality, and after both touching the leather (supple as hell) and checking the label (Room & Board), I realized that we were in the presence of Irrational Rich People Garbage, and we needed to get that loveseat home. We had been looking at couches to buy online for our living room, and were pretty much resigned to the idea of spending about 700 on one, because that seemed like the appropriate amount to spend for a sofa for people who were young professionals who could do better than a shoddy futon, but were by no means ready to buy investment furniture (even if they could).

After some googling, I realized that the couch we found (and hoisted up to our neighbor’s first-floor apartment to hold until we moved later that week), originally retailed for somewhere around $1,500 – $2,000. It was no longer on the site, but given other, similar loveseats — and the fact that I may have obsessively browsed the Room & Board site a few times in my day — that price was a best guess. I joked to Lauren that this free street couch was by far the nicest I’d ever owned, or would likely ever buy in the foreseeable future. And after a day of cleaning and restoring, which brought the rich, chestnut life back into the objectively dry-and-worn leather, it felt really cool to finally have a Nice Person Couch. I was already planning the things I’d do with the money saved on buying a couch, and giddy at the idea of sinking into those plush leather cushions for a night of movies and cuddling.

But as I lovingly applied coats of conditioner and buffed the armrests, I wondered why it would never have dawned on me to buy a piece of investment furniture in the first place (even used or vintage, a totally smart way to buy high-quality home goods). It’s a mix of things, obviously, and the biggest one is probably that when you have a lot of stuff to buy for an apartment at once, the last thing you want to do is wipe out a good portion of your budget on a single item. It’s extremely painful to hit “buy” on the one big-ticket thing, even if you can spend an equivalent amount on tons of small, meaningless purchases you’ll get sick of almost immediately.

And I’ve realized, though I hate to admit it, that my hesitance to spend on investment pieces — even if I could, and even if my 20-something life has been haunted by the spectre of cheap, knock-down, melamine-coated furniture — is that the “rich person” mentality is one I’ve never been in. And I mean “rich” in the sense of quality, not necessarily in the sense of “I have unlimited resources,” which I very much do not. I mean rich leather, rich wood, rich fabrics, rich products that can be cared and tended to over the years and provide a huge return on investment when you only need to buy one or two per lifetime, or can sell it at a strong percentage of original cost if you no longer need it. It’s a “rich person” mentality, in the sense that you need to give yourself permission to buy these things, to think that you are the person who can own the nice leather couch or the sturdy wood dresser or the coffee table you won’t throw away every time you move.

I’ve always had trouble giving myself that permission. My mother — someone who’s been in home flipping, redecorating, and furniture-building her whole adult life — has always been allergic to big-ticket prices, and I definitely adopted this from her. She would always be camped out at wholesalers and vintage stores and estate sales, ready to snag a designer piece at a clearance price. But what I didn’t take from her was the fact that she also restores or rebuilds a lot of this furniture, or makes her own from scratch. I took her frugality without her dedication to the DIY life, which just left me with a bunch of cheap products, exactly as they came from the store. As sad as it is, up until this year (my 26th year of life), I had never even so much as repainted an item I didn’t love.

But this year, as I’ve gotten more into redoing big pieces (DIY/home tour articles coming soon, I promise!), I’ve also realized how much easier/better it is to work with pieces that were already of a certain quality. Wood, leather, things you can easily take apart and put back together — all of them mean not just better up-front quality, but much better adaptability for when your tastes change. This is probably part of that whole “rich” thing, the pieces are “rich” in ability to change, they are made with enough structural integrity that you can take them completely apart, only to put them back together as you see fit.

I had a friend in France whose apartment was the object of my decor-lust, full of rich, solid items that seemed to be gathered effortlessly through a (young) life spent traveling and browsing thrift stores, always with a keen eye. Some were hand-me-downs, some were bought at souks in Morocco, some were purchased right there, on the Boulevard Saint Germain. But all of it came together beautifully, and made the place feel like an intentional, lived-in home, full of character — nothing felt opened from a box and placed, without thought, in a corner of a room.

And I thought about how much she’d probably spent on her stuff, and realized that, though I never spent that much up-front on any one item, I’d clearly spent just as much as her in the fact that I’ve replaced almost literally everything every time I moved into a new apartment. I’ve easily spent upwards of $2,500 on crappy couches I was never happy with, which is more than enough to have bought one beautiful leather couch that could have lasted me for decades. I’ve spent tons on different crappy coffee tables, all of which I’ve ended up hating — and I’ve only learned in the past few months that little items like those are the most ideal to redo myself. In my effort to be cheap with myself and my surroundings, I’ve ended up having to buy the same things over and over, spending more than I would have on one investment piece.

I love my new apartment in a way I’ve never loved any other living space — there are big windows and brick walls and a huge bathtub — and Marc and I feel deeply at home here. It feels like the right place, and the right time in my life, to really start being thoughtful about how I buy my pieces, and to give myself permission to buy “like a rich person” so that I can live like one for years to come. I want to love the things I have, and feel like I am carrying something from one apartment to the next, so that there will always be a thread of home. I want to come home and feel that deep moment of comfort and relief that can only come from being a space you truly love to be in, instead of the shifting discomfort I’d always felt in my other apartments. That doesn’t mean getting only expensive pieces, but it does mean that you don’t have to take every piece at face value, and can change/makeover what you don’t like. And it means that you can go without a certain item for a while, until you find just the right piece after weekends spent browsing thrift stores and flea markets. You can be the thoughtful decorator who ends up with a home like my old friend.

Because buying cheap doesn’t mean spending less, it just means spending more often, and never being happy in the meantime. And I’d rather pay a little more to make our house feel like a home.