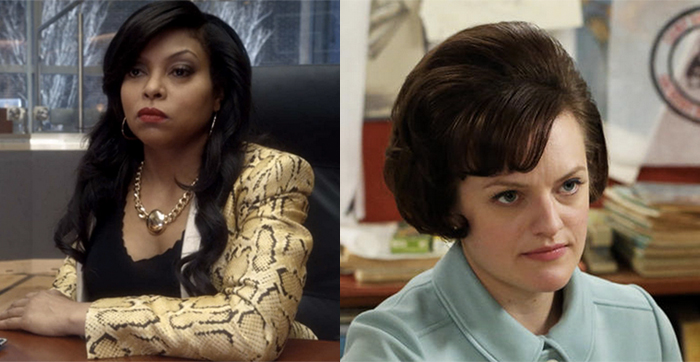 I realized recently I’d been watching a lot of shows about work – specifically Mad Men and Empire. Though the two series may seem worlds apart (one is filled with crisp pastel skirt suits, the other with skintight leopard print), they share a surprising number of common themes at their cores. Both take place in New York at up-and-coming companies built on an artistic but ultimately mass-marketed product. Both star powerful men who are lauded as creative geniuses, which somehow allows them to get away with being more or less awful otherwise. And both of these men have complex relationships with women who are just as relentlessly committed, if not more, to the work they do together. It’s this last part – all the hard work – that makes the experience of watching them such a vicariously rewarding experience. After several hours of sitting glassy-eyed in front of my laptop moving only to balance the takeout propped precariously between my knees, I would fall asleep totally exhausted from all the creative breakthroughs, tenuous negotiations, and office politics I’d just navigated in my mind. While I can’t say how the characters’ tactics would fare under scrutiny (when is it best practice to sleep with the competition and/or murder your childhood friend?) there is something uniquely exciting about ‘work shows,’ something about watching your hero – be it the bright-eyed copywriter Peggy Olson or the fang-bearing music producer Cookie Lyon – verbally decimate her opponents like a real #bossbitch.

Peggy, who I’ll refrain from patronizing with another retrospective on her (admittedly important) style metamorphosis from Peter Pan collars to pantsuits, is the hardest working person in the office by the end of the last half-season. When she’s trying to win the Burger Chef account, she stays up late into the night, racking her brain for ideas that will unlock the psyche of the suburban housewife. It doesn’t matter that her superiors have already approved her first idea — she knows deep down it’s not the best she’s got and that’s why she keeps toiling until she gets it. The result is a startlingly moving presentation on the isolation of modern society, linking the moon landing with the rise of TV and the erosion of the American family. “You’re starving,” she tells her captivated client, “and not just for dinner.” (Now go forth and order a double patty with fries!) After that episode, I not only felt a stoner-like sense of philosophical wonder, but was actually more driven to work the next day, like she had elevated my job just by being so committed to hers.

Cookie is a whole other story. With her flawlessly brutal insults and two-inch eyebrow raises, she’s operating on a different wavelength than the rest of us (probably than any real life human, but who cares?) Yet, like Peggy, the thing that makes her heroic is just plain work ethic. From what we can tell, she is never not on the grind – hauling herself out to sketchy apartment studios, closing deals, directing new songs from the backseat of a speeding cab while bartering with a parole officer while insulting an enemy so viciously he questions why he was born. During a PR crisis with one of their top artists, she barges into a room full of suits, announcing, “You don’t need to drop him because of the shooting, drop him because his music sucks.” She’s basically a spirit animal for unapologetic expression, wrapped in a leopard bodysuit with matching asymmetrical cowboy hat.

While TV is often just a way to turn off all but our most vital brain functions at the end of a stressful day, I think there is something significant about seeing someone in action that affects how we see ourselves. People love characters like Cookie because, when you watch her, you are her. For a few minutes, you can be the type of person who expresses your views without falter, regardless of who is in the boardroom. When you watch Peggy, you can, for a moment, pour yourself into a creative project and feel the satisfaction of unearthing some human truth in the process. They may just be making pop music or filling Americans fridges with condiments, but the pride they take in their work transcends the cause. It’s an end in itself.

Like all TV characters, they have their stereotypical ‘feminine’ qualities. Yet even these seem mainly tied into their professional personas. Cookie is obsessed with caring for her family, but her version of doing so involves blowing into her adult son’s apartment while he’s in bed with his partner, shouting “Come on boy, get up, we got work to do!” Peggy falls for a colleague here and there, but never so much that she quits and marries them, as many of the office secretaries do.

It makes me think of all the other fictional career women I’ve watched over the years—Agent Scully, Elle Woods, Samantha Jones, Leslie Knope…all work in different fields (with varying degrees of plausibility) but that inspirational element is there. I never thought I’d identify as a ‘career woman’ growing up, not because of any domestic aspirations but just because that particular term has such serious, severe connotations, generally involving 90-degree angle shoulder pads. But I always loved these characters, and have unintentionally catalogued them as personal saints of sorts.

They say when you’re nervous about something like a presentation or interview, you should visualize yourself going through the motions in as much detail as possible. Maybe by watching other women give their goals all they’ve got, so much so that it trumps any concerns for how they look or are perceived, we are performing a mental exercise that will prepare us to do the same. Sure they may be over-the-top, speak only in snappy one-liners, or inexplicably chase murderers in heels, but it’s TV after all. Mythology has never been realistic. We can still have a fictional ‘career woman spirit animal’ to channel in times of need. Of course, this could all be an elaborate excuse to renew my various streaming subscriptions, but I’ll let that possibility go unexplored.

Image via AMC and Fox