I Don’t Have A “Typical” Ring, So People Don’t Believe I’m Engaged 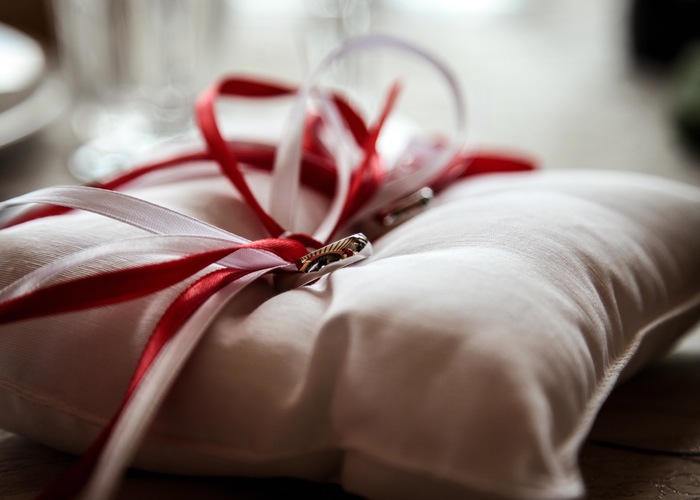 When my fiancé first popped the question, he did so with a white gold band. It wasn’t fancy, but it got the job done, and I was okay with that, so why wasn’t everyone else?

The white gold band was purchased with the only cash my fiancé had on him. He wanted it to be a surprise during our cross-country road trip and I was handling all of our expenses. The whole thing felt very romantic to me, especially the proposal, but I’ll spare you the details.

So, being that we were on a road trip, we were miles away from our friends and family, we called our closest loved ones, then chose to change our Facebook relationship statuses. The flood of “let me see the ring” texts and comments on social media were overwhelming. Why did everyone need to see my ring? It wasn’t that I was embarrassed, but I knew that everyone was asking because they wanted to see a rock, and I had no rock to show. My ring was a white gold band that fit my middle finger on my right hand and I was ecstatic about it. In the words of Kim Kardashian, “let me live.”

I did give in and text a few of my closest girlfriends pictures of the ring. Their responses were sweet (“Oh, I love white gold!”), but I knew that gossip was probably beginning behind my back. I don’t play with nice girls and, quite frankly, when it comes to engagement rings, there are no nice girls (in my experience).

After returning from our road trip, my fiancé told me to pick out the ring I wanted (within the parameters of our budget). I had always dreamed of a pearl engagement ring, but I was a bit deterred by the selection of pearl rings. They are all more or less designed with the pearl in the center of the ring, with diamonds surrounding it, so the ring looks like a flower with the pearl as the bud. I was looking for something different.

While still shopping for my dream ring, I wore my white gold band on my right middle finger because that’s the finger it fit. This, I learned, was shocking to other people. They didn’t believe that I was engaged. I was constantly asked where my ring was. Women would react with a quickly hidden frown, then gushed about how romantic the proposal was. Men reacted with a smug smile, thinking the marriage would never happen and that this band was given to appease me.

In one case, I actually had a coworker tell me that no one knew I was engaged because I don’t wear it on the right finger. He looked perplexed when I explained that the only two people in the world who needed to know I was engaged already knew: my fiancé and me. To all the frowns, smiles and comments I received, my apologies for not wearing the type of ring that is supposedly “required,” and for not wearing it on the finger that society dictates I wear it on.

I finally found my dream ring on Etsy. It was a vintage ring from the 1920s that was fabulously art deco, and not made to look like a flower. As soon as I saw it I knew it was my ring. Lucky me, it was very reasonably priced, we got to pay the jeweler directly, and it was within our price range.

After ordering it, having it appraised, cleaned and sized, I was ready to take this bad boy out on the town and by that I mean, show a few close friends. I was prepared for everyone to love my ring as much as I did. That was something I shouldn’t have planned on, considering the ring didn’t have a diamond. My girlfriends couldn’t even fake the enthusiasm. They couldn’t fathom that this pearl was what I wanted. I was disappointed for a few moments, before remembering that it’s my ring, and I don’t need the validation of anyone else.

To all the women out there who are considering something other than a diamond for their engagement ring, be it a sapphire, pearl, onyx, no gem at all, no ring at all, etc., just know ahead of time that you will have to love your decision yourself, because others may not be as accepting as you want them to be. I didn’t expect it to matter to me, but it did sting a little. Regardless, I don’t regret this ring choice and I’m glad my fiancé and I didn’t succumb to the pressure of our friends, and spend any additional money on a so-called “real” engagement ring.  Despite how far we’ve come in regards to how we view marriage, it feels like women and men alike only consider a true engagement ring to be a pretty little diamond sitting on your pretty little ring finger. And I’m not buying into that.

Veronica Zabczynski is a writer living in LA. You can find her poetry on Extracts, Lost Coast Review, Painted Bride Quarterly or her blog, wordslikelace.com.