I Spent A Year Saving $8K, And I Still Couldn’t Afford To Move To The Bay Area 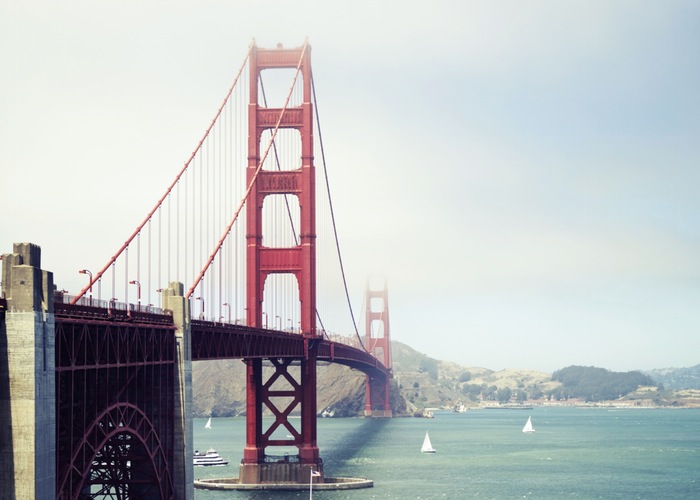 Early on a Wednesday morning, I was standing in line at an airport convenience store buying travel-sized toothpaste because I (stupidly) had forgotten to pack any from home. A young girl around seven years old, eyes sparkling in the reflection of shiny keychains, selected one and brought it to her father begging him to buy it. He said no, of course, and then asked, “Don’t you want to spend your money responsibly instead?.” I was at the airport for my second trip to California from Minneapolis, in the midst of my wild relocation adventure. The conversation between the father and daughter reminded me that I’m doing the right thing (not by buying the overpriced toothpaste), but by shifting my focus from my dream city of Oakland, and giving Southern California a shot.

First, I have to admit that compared to the midwest, my cost of living will be going up significantly almost anywhere I go. But after a year of working a full-time office job and a full-time restaurant side hustle I have squirreled a significant amount of pennies away (with plenty of help from TFD!) to move out of the cold north, all the way to sunny California. Though I love Minnesota, the winters have always been hard on me. Among various other reasons, my skin, mental health, and activity level were all going downhill for six months out of each year. I spent so much time every winter wondering why I lived there. After a vacation to San Francisco/Oakland I decided officially that I was going to live there, and nothing was going to get in my way. Well, a lot ended up getting in my way.

I knew rent in the Bay Area was expensive, and had been preparing for it in my budget. But here’s the thing: take whatever you think the rent is, and multiply it by five, and you’re probably getting close. On top of the steep rent prices, security deposits I ran into were often two and a half times the rent. Basically, for me to move into a small one bedroom, in a not-so-nice part of town, with my dog, it would be at least a $5,000 security deposit, and around $2,300/month. So, before I even moved in, I would end up paying $8,300, and then would have to maintain the rent. This did not include utilities or a parking spot, which would be an additional $100 – $200/month. And this wasn’t even in proper San Francisco, where rents were even higher! This was just in Oakland, and the more I found these prices, the more I started to feel like an idiot.

With my determination and my savings (I’d saved at least $8K, if not more), I still put in applications to rent these places. I had enough money to sign a six month lease, and pay for the entire six months of rent upfront, and my boyfriend would be living with me as well after his job search. This would completely deplete all of the savings I had worked so hard for, but I figured at this point I was “all in,” and would freelance my bum off to get back on track. Looking back now, I’m so glad I got rejected from some of the places I was looking at. It would have been financial suicide for me. But at the time, as each landlord told me “no,” I felt like a failure, tears welling up in my eyes, as I pictured myself sitting on the couch through another winter, consuming wine through an IV in my extra large grey sweatpants, and rapidly gaining weight. I felt like my California dreams were crushed, and flew back to Minneapolis, wanting to hide from the entire world.

Since I had already given notice to my landlord that I would be out of my apartment within the month, I had to act fast and figure out a plan b. It was either move somewhere else, or find another lease in Minnesota, and sign on for another year. Even though I had felt like I had prepared myself for anything, nothing was going right. I booked a flight to Los Angeles to check out some neighborhoods. I figured it was still in California, even sunnier than Oakland, and my research (though Craigslist can often be deceiving) made it seem a LOT more affordable.

In the strangest transitioning month of my life, I fell in love with the city. I was able to find an amazing apartment almost immediately. It has a staircase, loft, parking spot, walk-in closet, and balcony and is located in a good neighborhood. My boyfriend was able to quickly nab a well-paid tech job a mile away from our new place, and my creative projects and endeavors are starting to grow in success. Of course, LA is still a big city, and rents are still much higher than they are in the midwest, but they are much more within our budget, and don’t require us to overextend ourselves. I would say we each pay about $500 less than we would’ve paid in Oakland, each month, and the security deposit was only one month’s rent. With the lower rents and easy access to fresh, affordable produce I am able to budget well, and am thrilled that I didn’t rush into the Bay Area move. The feeling of being able to move, and still comfortably afford my rent, is well worth it. I can go on long walks and hikes with my dog, instead of joining a pricey gym. In my case, this was the better financial decision, and I’m glad I took the time to realize that, even though it was a trying time in my life.

Through all of this, I’ve learned so much about patience when it comes to following your dreams. Each day, I am discovering more great things about Los Angeles, even though I never would have imagined living here. The hard work I put into moving away (and the commitment I made to saving money) ended up paying off in the end, and each apartment rejection somehow brought me even closer to happiness, even when it felt like it was dragging me further from it. There are still the daily struggles, like trying to make friends in a big city, or trying to bike Minneapolis-style without pissing off the cars stuck in traffic. For me, saying “no” to Oakland is just like the father encouraging his daughter to say “no” to the bling-tastic airport keychain. I had to be patient, but I ended up making a responsible choice that still makes me happy. If you are considering moving, and are saving up for your dream destination, be prepared for it to be a bumpy road. But know that if you keep saving, and researching, and being honest with yourself about your finances, you can still end up somewhere amazing, and keep your bank account intact.

Colleen McFarlane is a writer from Minneapolis currently living in LA. Follow her awkward transition on Instagram, or check out her sports blog.