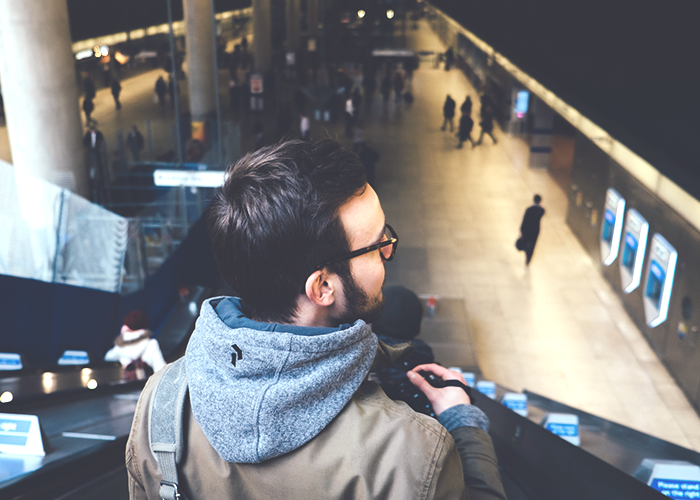 With the upcoming summer break, I can’t help but feel a bit nostalgic. I’m talking about the feeling I had this time of year back in college. I also think to myself, “Man, what if I could go back in time and say something to my college self?” To my knowledge, time travel is still a thing of science fiction, but I figured I’d give it a shot anyway.

First, I have to put myself in my college self’s shoes. At this point I’m stuck in the library CRAMMING for finals. in full panic mode. The semester is coming to a close and I am catching myself daydreaming about break. I’m planning on either reading a few books OR (if these are my earlier days) I’m thinking of which Top 100 IMDB movies I’ll tackle when I get home.

If I could add one more item to that daydream, it would be this list of lessons I now know young me is going to have to learn the hard way. This list is in no particular order of importance. Each lesson has been equally important in my life.

1. Learn from the mistakes of others, but don’t beat yourself up too much for making your own.

My freshman year of college was filled with asking a lot of questions. I loved to talk with older students and ask them questions about their experience. Many of them would reflect back and give the common phrases, “Enjoy it while you can.”

It often took a few minutes of prodding, but then the real answers would open up. “When you take Econ 301, make sure you avoid professor Y.” (I was going to put the standard X there, but I did not get to live in X-Mansion for my undergrad.) Or, “Start searching for a job NOW.”

Those were the real valuable pieces of advice that helped me land a great job right after graduation. But, naturally, despite how many questions I asked, I couldn’t figure out the optimal solution to EVERY potential situation. I stumbled. I fell. I got Ds on exams that required an immense amount of work, and ended up with a C overall.

Early on, I would take each failure a bit too personally. I would think I wasn’t not cut out for my major, or that I wasn’t as smart as the other kids in the class. I mean, objectively, I had an exam in front of me indicating I was near the bottom.

My problem wasn’t me; it was my strategy.

Over time, I quickly learned I could make adjustments to my approach, and receive a better result. I would tweak my studying habits, or go into office hours for additional questions. I would talk to my peers to see what problems they were having, and set up group study sessions. The trick I developed was when I received negative feedback via a poor result on a quiz or exam, I would immediately think on how I could change my approach to receive a positive result. I eliminated all the self-talk saying how I should have studied more or that I was stupid. Those thoughts were not going to help me get an A on the next test.

2. Learn to appreciate the moment, but don’t find yourself idle or lazy for too long.

At one point, during my Sophomore year, my first class started at 4:30pm. Ahhhh, those were the days. Sadly, I quickly learned, that sleeping in a slippery slope. Left unchecked, my college self became a bit TOO lazy. I began to sleep in a bit longer than I should have, and it started to show.

Being proactive is one of the most vital ingredients to success. Sadly, I learned this only by being completely reactive to my environment. When the environment starts to make us soft, then the smart thing to do is to put the pressure on ourselves. Over time, things will catch up, and we’ll be happy we did the work to prepare.

3. Learn that nothing is good or bad, but thinking makes it so.

Okay. I’ll admit. This one comes from Shakespeare. Wait, what is a CPA doing reading Shakespeare? I know. I’m shocked this quote stuck with me this long, but the lesson is so eloquently stated.

We often find ourselves surprised by outside circumstance. Some of us respond by rolling with the punches, and finding a way to get the job done. Others (cough, cough, me in college, cough) might spend quite a bit of time looking for someone to blame or some outside factor that made our situation worse.

Easier said than done, but I would tell my college self to not take things too seriously. Pick yourself up, brush the dirt off, and keep moving forward.

4. Learn to work with others, but only trust yourself.

In college, we often had team assignments, and even team projects that could be worth as much as 50% of our grade. Naturally, this meant a high level of collaboration. This structure led to a lot of learning about coordinating team schedules and dealing with many types of people that is relevant to me to this day. By Sophomore year, I learned that the correct response when someone was a “no show” was to take notes and fill them in later. Yelling at them the next day in class was not an optimal solution to receiving a good team grade.

Similarly, when it came to getting the assignment done, the smart move was to develop the right structure to pull out any weeds before the final submission. In other words, don’t rely on another teammate to get the job done perfectly. Lean on each other and self-review each aspect of the project.

With this approach, you can collaborate everyone’s strengths, while simultaneously filtering out any noticeable weaknesses.

This process also means you don’t have any sudden hiccups hours before the project is due. The final hours are spent refining the work and bolting on any necessary changes. The alternative in my earlier college days was typically stressing out, and nearly burning bridges with semester-long colleagues.

5. Learn the difference between productive procrastination and productivity, but still make time for both.

I used to swear by these. Sometimes I would have 15 minutes between classes and think to myself, “YES! Enough time for one TED Talk.” Hell, even in the middle of a 90-minute lecture (I know), I’d open a new tab on my laptop and (I know) launch into a 20 minute TED talk on how creativity is born (I know).

Great TED talk, but it didn’t move me any closer to understanding why the limit does not exist. Feeling productive is not the same thing as BEING productive.

I learned that lesson a few too many times. My hope is that by now, it is engrained in my mind. My solution now is to do the hard things first, then enjoy the rest of my time.

College is a place where I learned how to learn. That might sound trite, but it is true in my case. I just wish it didn’t cost me $100k+ to learn such valuable lessons.