Liking Pretty Shit Doesn’t Make You Shallow, Being Shallow Does 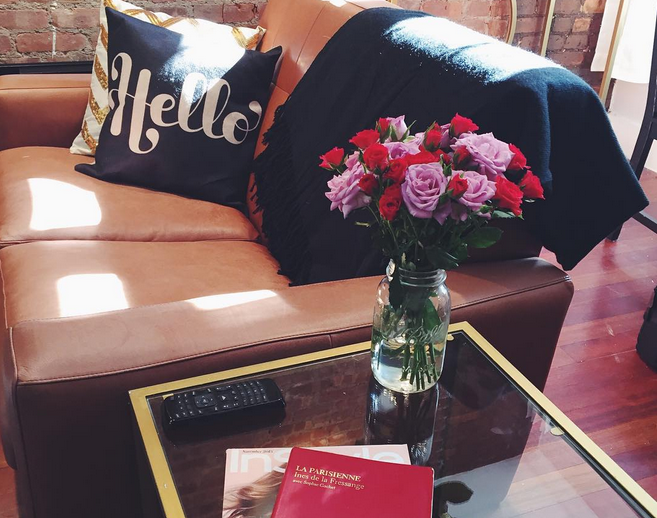 For the past month, I’ve been in my new place, working on setting things up and embracing my newfound confidence when it comes to basic shit such as putting together furniture, painting/staining, basic handiwork, and just generally “not accepting things exactly as they come.” It’s been a decent challenge going to a much bigger space that needs a lot more stuff in it while barely branching out from IKEA, DIY, secondhand, and shit I found on the street (like my couch, which I cleaned and rehabilitated). I was raised by a decor maven who always beautified and custom-made our spaces, and it’s been a real joy and challenge for me to do the same, on a much more limited budget and without all of my mother’s technical know-how. Next Thursday is our deadline to have most of the apartment and office done, and then the awesome posts will start on how to DIY things yourself! (Tip: ugly kitchen cabinets need contact paper like fish need water.)

And while I do find a genuine feeling of nobility in the idea of “becoming someone who can put shit together,” because that’s an inarguably useful skill that women often aren’t taught, it’s harder to not wonder at which point it is “shallow” to worry so much about how my place looks. While I’ve never been a big fashion gal, nor am I capable of doing anything, makeup-wise, beyond the exact same winged eyeliner and basic lip I do most days, interior design genuinely makes me light up and is something I could spend days on end doing, if given the chance. And isn’t this, in a way, a silly way to spend one’s time? Marc loves the finished product I’ll put together, sure, but he can’t understand how I can spend an entire night looking over options for how I’ll maximize an awkward kitchen corner or what the perfect shade of charcoal is for an accent wall. I don’t think he thinks of me as shallow, but I think he imagines that for me this is like video games or Real Housewives episodes or any other vice.

Part of me wants to argue that, no, wanting to make the space around you feel more beautiful, serene, and a proper reflection of yourself makes life much richer in a way entertainment does not. I feel, and I think many people do, that the best work is done and the best sleep is had in a home that feels exactly as you want it to. Taking pride in one’s surroundings means keeping it cleaner, and perhaps most importantly, spending more time at home (which is much less expensive) because it’s your favorite place. I was never particularly happy in my old apartment, and was always itching to be anywhere else — here, already, you practically have to drag me out. It’s just too perfect where I am.

But I do think, when I see the utterly-perfect lifestyle bloggers, that there has to be a limit to this. You see these perfect women who are paid to have their apartments redone by designers, or who have these astronomical budgets, or who have the absolute perfect scene for every shot, down to the dozen-or-so knick knacks that all somehow match while remaining charmingly eclectic — who even are they? I’ve gone on about this phenomenon before on the site, but it’s something I find myself thinking about even more as I create my own space. Am I ever falling into the trap of trying to be too perfect, and does that make me shallow?

Recently, my dear friend Jamie (who shares my love of home decor) and I were talking about this very thing. I have always absolutely loved seeing pictures of her places, much more so than any Pinterest-perfect blogger, because they’re objectively beautiful, but someone real clearly lives there. It’s not insanely manicured, everything isn’t expensive, and it’s something I could realistically try in my own home.

It may not be perfect, but it's home.

I am now in possession of my dream distraction-free writing nook. 💖✏️📚📇

.
We talked about how hard it is sometimes to walk that line between “investing in beauty” and “becoming a vapid person who is too concerned with how things appear.” And one thing that I think is important to remember about the whole ~lifestyle blogger~ phenomenon is that there really ISN’T anything beyond this appearance. When is the last time you saw one of these bloggers say something genuinely funny, insightful, seriously opinionated, controversial, or even, in many ways, human? Everyone follows them for how they appear, and that’s why everyone scrolls over the thousand-or-so words the vegan baking blog with the stunning photography will write about her day before she gets to her blondie recipe.

But I think that this emptiness, this “totally OBSESSED” with whatever material thing happens to be in your life that week, isn’t the only way to appreciate beauty. And yes, investing in quality items in your wardrobe in home is a totally smart way to spend your money while creating a richer aesthetic life. But beyond that, enjoying pretty shit for its prettiness is not the unique domain of frivolous people. You can be a totally smart, discerning person, and still get really, really fucking excited at the prospect of having flowers. (As someone who has mostly fake flowers except for the occasions I treat myself, it’s not really noble that I don’t usually have them — it’s just that I spend that money on cocktails instead, which isn’t any better than something that makes my dining area prettier.)

We have to give ourselves permission to like these things, and enjoy them, and only ask that we be smart about how we embrace them. Do I want to fill my cart up with every item from West Elm and “curate” myself into the perfect living room that looks like it was lifted out of an unrealistic sitcom about New York? Of course. But would I ever do that? Absolutely not, not even if I had a shit ton of money. Because part of the fun is having to rise to the challenge of limitations — of a budget, of the item that needs to be coaxed into perfection, of the complicated space that requires some strategic laying out. And in making this experience richer for yourself, and in teaching yourself skills along the way, you turn something that was purely aesthetic (which isn’t necessarily a bad thing!) into something hugely rewarding.

But sometimes you just like the pretty candle, or the colorful accent wall. And that’s okay, too. Because beauty for beauty’s sake doesn’t make you shallow — being shallow does.