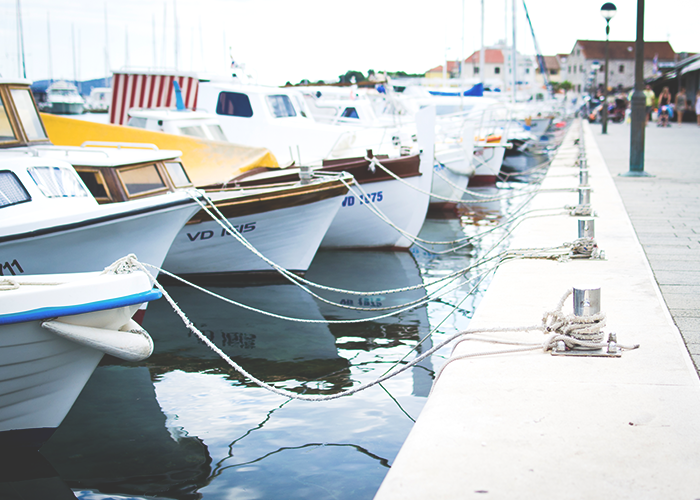 When I graduated college, it only took me a few months to realize what a huge privilege it was to be out in the world with no debt from student loans. (That doesn’t mean my spending habits were stellar, as I was not saving the dollars my peers were putting towards paying down their debts, but I digress.) I have maybe one other friend in my position, whose parents were fortunate enough financially to pay for her college years, and maybe one other friend who managed to pay hers off within just a few years. The vast majority of my friends now are in their twenties, and their student loans are a regular topic of conversation.

I’m glad to have friends and loved ones who are open to talking about their debt — who celebrate victories, like when they pay off one of their loans, or refinance themselves into a situation where they’ll have paid off their debt by 34 instead of 42. I still can’t believe how little I knew about the financial undertaking of going to college until after I’d already graduated. Because the plan for me was to always have college paid for by my own parents, I didn’t realize how outside the norm that situation was.

When people talk about student loans, they often discuss them alongside other things; how the burden of student loan debt is what’s holding them back from making other big life moves, like buying a house. So when I recently heard about the Maryland SmartBuy program, I had to immediately look into it. Here’s the deal: you can sign up to purchase a home in Maryland, and subsequently have (at least some of) your student loans paid off by the state — up to 15% of the home’s value.

Of course, this all depends upon you meeting the eligibility requirements to qualify for the program, including having a minimum student loan balance of $1,000, a maximum balance of up to 15% of the purchase price of the home, and the ability to pay off your remaining debt balance at the time of purchase. (If you have debt that far surpasses the 15% of the home that you can afford, it might still be possible to have some debt forgiven if you have multiple student loans under your name, though it’s still unclear after reading about the program whether that is a possibility. It seems that individuals with a substantial amount of debt, like around six figures, would have a much harder time qualifying, due to having to pay off the remaining balance upon purchasing the home.) You would also have to be eligible under the Maryland Mortgage Program requirements, including the various income limits stipulated by different counties. As far as I can tell — and there is a lot of fine print to consider — you don’t currently have to be a Maryland resident to apply to the program.

All in all, it sounds like a very good deal to me. I immediately notified my boyfriend about it, since he has a sister and other family members already living in Maryland. If student loan debt is what’s getting in your way of making other big “life” decisions, programs like this one, though rare, are a promising way to make big steps forward, while also releasing you from some of the burden of debt.

In fact, it almost sounds too good to be true. Where’s the catch? What’s in it for Maryland? Apparently, it’s just as much a way to help out Maryland’s housing market as it is a way to bail millennials out of the significant student debt issue we’re facing as a country. Here’s what Maryland’s Lieutenant Governor Boyd Rutherford said in an interview with the Baltimore Sun:

Traditionally those in their 20s and 30s would account for a substantial share of Maryland’s first-time homebuyers, but we’ve seen a little difference in that demographic over the years, and it’s believed that student loan debt is a part of that challenge…Those debts can be a tremendous barrier to homeownership.

So, essentially, by incentivizing would-be homebuyers with the promise of debt forgiveness, the program can help give Maryland’s housing market the boost it has needed in recent years.

There are, of course, a few downsides to consider. For one thing, this program is limited to Maryland: if you buy a home there, you’re more likely to stay put for a good portion of your adult life (especially because the program requires you to stay in the home you purchased for a minimum of five years — or else you will have to pay back the debt that was covered for you). This means you may miss out on job opportunities and other choices that would take you elsewhere. Of course, stability and consistency are things a lot of people value, so that wouldn’t be so bad for many people. (I can personally attest that much of the Maryland countryside is beautiful, and Chelsea surely recommends Annapolis as a great place to live. *wink*) Also, while the program would help out a significant number of young people in debt, it doesn’t do a lot for those with the highest amounts of debt to their name — the people who stand the most to benefit from an incentive program like this one.

But I’m hopeful that, if the country continues down its current trajectory of requiring the majority of students to undertake substantial debt in order to procure a higher education — and I’m not betting on that being curbed any time soon — more programs like these start showing up. And if a state’s own economy can benefit from providing these incentives, then why shouldn’t they?