Why I Have No Problem Spending Money On Bougie Health Food 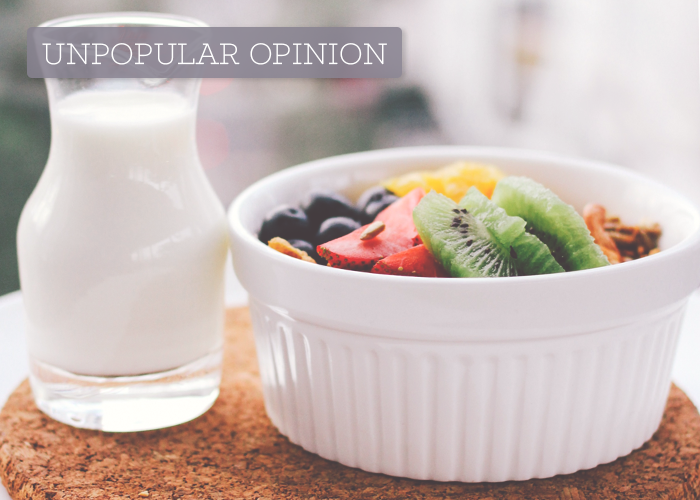 For years, I told myself that I couldn’t afford to eat healthy.

I would regularly spend £30 on Saturday evening takeaway pizza, and drop £5 on lunches that would cost 50p to make at home. I shelled out for sugary drinks each morning and brought home dessert every night, but it wasn’t my fault that I was eating garbage, I reasoned. It simply wasn’t within my means to live on $220 moon dust smoothies and kale.

I don’t come from an especially wealthy family, and despite my parents’ best efforts, I was a picky kid raised on a diet of beige: a color palette that got continually worse when I went to university and was put in charge of my own food budget. After a few dubious attempts at improving my diet, I became inevitably disappointed by a) the shelf life of avocados, and b) the outcome of my limited cooking abilities. I spent three years gorging on baked pasta with jarred sauce and frozen fries with ketchup, and pretending that an apple a day was offsetting my also daily chocolate bar habit. As a vegetarian, I didn’t even have meat to help me hit my protein quota. And I’d never used a lentil in my life.

Fruit went bad too quickly, and salad turned to mush before I had time to eat it. It was wasteful, it didn’t taste good, it took too long to prepare, and how the hell do you even cook quinoa anyway? (Spoiler alert: you boil it and it’s easy, so quit whining, past me). All of the lies you could imagine telling yourself about healthy food, I lived and breathed them – literally – and my outside reflected my internal monologue. I was constantly lethargic, spotty, and hopelessly unfit. You know those viral pictures that go around about the tall, handsome advertisement burger and then the shitty, slightly decrepit one you actually get in the box? I was basically a human version of the latter.

And honestly? I was miserable. Like, crying on the train every morning miserable.

Six months ago, after a particular vicious bout of binging, I decided to call time out on killing myself slowly with white flour, and eradicate store-bought, pre-packaged meals from my diet, replacing them with options I had to get off my ass and cook myself instead. I based my new regimen mostly based on bloggers that I assumed had the lifestyles I could never dream of affording, but that I aspired to emulate anyway. I liked their Pantone Instagram accounts and glossy hair, sure, but mostly I liked that they didn’t count calories, but instead, goodness, which was a revolutionary concept to someone who spent two decades meticulously reading nutrition facts and then ultimately ignoring them anyway. It was finally going to be about health, not weight, and if that wasn’t enough to motivate me, I was going to be pretty sick, medically and mentally, for most of my adult life.

The list of ingredients on some of the recipes read like a foreign language — baobab, spirulina, chia, acai — and when I tried to add them to my online grocery list, I realized they were going to be gut-wrenchingly expensive too. So for first two weeks, I did Deliciously Ella’s budget meal plan, which includes three meals a day, snacks, and the kinds of storecupboard that won’t bankrupt you. And to my amazement, I survived.

In just those fourteen days, I felt more awake and more motivated; I had glowier skin and a lighter step. The more I cooked, the better I got at it, and the more I thought that the weird ingredients might be worth investing in after all. I began spending £4 on jars of nut butter, buying £5 worth of berries for smoothies, because I knew I’d eat them before they grew mold. I paid obscene amounts of money for medjool dates, because I knew sweet potato brownies wouldn’t taste as good without them. I ordered brown rice pasta from Amazon (with the delivery charge) instead of buying white pasta from the store.

I became the sort of person I was used to ridiculing, but suddenly I couldn’t care less if anyone ridiculed me, because I felt better, and I couldn’t put a price on that.

At this point, I should clarify that I’m not writing this to tell anyone that the way they eat is wrong, or be the kind of smug heathen that never touches carbs or eats cheese, because that would be a thinly-veiled lie. I don’t subscribe exclusively to the cult of wellness, and one of the best things about eating better is how great food tastes when you eat anything that’s NOT totally virtuous, which of course, I still do. It’s just that now, instead of plowing through 1,000 calories quicker than I could breathe, I actually stop to savor each greasy bite of a Domino’s pizza, the molten top of a restaurant macaroni cheese, or garlic bread slathered with parsley-speckled butter. Food that’s “bad” for you, if you really stop to enjoy it, is excellent for your mental health and your morale, just like going out for an occasional nice dinner or cooking a feast for friends is an investment in joy, and that’s one that’s worth more than any other.

I should also point out that not all of the healthy stuff is expensive. Bananas are 10p, and a can of beans or chickpeas makes a whole meal for less than £1. I’ve started bringing leftovers to work for lunch, and stopped buying peanut butter bagels for breakfast, so even when I’m buying celery salt and fennel seeds on top of half of the produce aisle, I’m ultimately saving cash. However, I know that I am lucky to be able to afford the kind of food that makes me happy, and if I was working a job that paid me less, I might reach a different conclusion. If I lose my job, a possibility on a daily basis when you work in journalism, I’ll have to figure out another way to get to that place, but for now, it’s within my means.

Most importantly, I should tell you that this way of life didn’t magically make me thin or beautiful. I’ve lost about 12lbs, which are noticeable to only me, but honestly, I couldn’t give a flying fuck. You don’t have to eat how I do or spend as much as I do to feel healthy, because that’s a state that’s different for everyone. But for now, I’m proud to spend my money on coconut water and raw cacao, because they’ve stopped me feeling like I’m failing my body, and it’s taken me 26 years to figure that out.

Eleanor Jones is a writer living, working and eating in London.