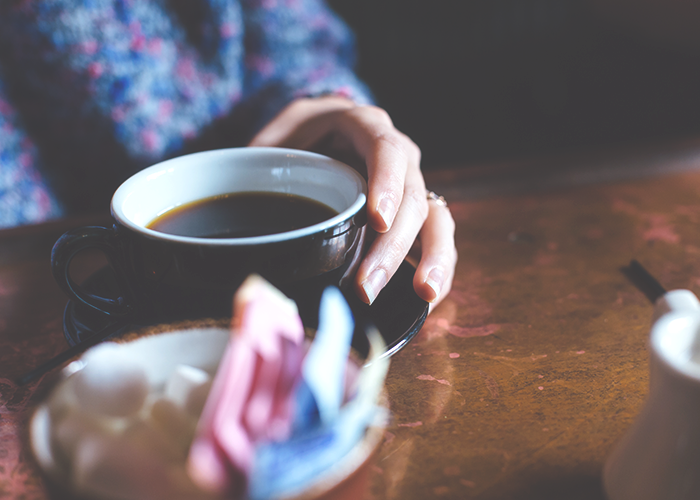 Ever since I started working for TFD, it feels like money is constantly on my mind. In a good way, of course, because I feel like I need to be more accountable for the way I spend and save it — like keeping up good financial habits is now a part of my job (and my ~brand~). So, recently, when I was talking with one of my friends and the subject of money came up, I used it as an opportunity to try and have an honest money conversation. They told me that they’d been feeling super good about their spending habits this month, that they couldn’t believe how much money was in their checking account, until they realized their rent check just hadn’t been taken out yet — they were actually worse off than usual.

I asked them whether or not they had a savings account. My guess was the answer was no, and I was right. But, of course, me telling them all the virtues of having savings, and even going on about my love of automatic savings apps like Digit, fell on deaf ears. It did not lead to them downloading an app, or opening an account right then and there, or even hinting that they would soon. If anything, they seemed annoyed that I was asking questions rather than simply commiserating about being in a less-than-ideal financial situation.

This person is someone who I’ve always perceived as not good with money. I don’t think I’m great with money yet, but I’m more confident than ever that I’m on my way there, and sometimes, this causes me to bring up money in ways that simply aren’t productive. I want to be the kind of person that talks about money, one who people want to talk about it with, even if I never become an expert. But I’ve come to realize that I’m just not very good at it — at least not yet. Instead of starting the helpful and productive conversations that I want to — ones that help me, too — I fear I sometimes come off as accusatory, condescending, or judgmental, and because of the awkwardness of the other person not wanting to talk about it, I end up abandoning the conversation.

One thing I have to remind myself of is that I, too, was bad with money not so long ago. And not even bad in the sense that I didn’t know how it works, I just really didn’t want to talk about it. I would put together something resembling a budget spreadsheet at the start of the year, and then promptly forget about it, and watch myself transfer money back and forth between checking and savings like a sad game of ping pong I was too good at. I was bored by the idea of talking about saving — let alone saving for retirement — because I never thought of myself as a “money person,” even though I had visions for my life that would definitely require having money.

I also felt that being “creative” and being interested in growing personal wealth — being a money person — were mutually exclusive. Being concerned with money was the same thing as being materialistic, which I desperately didn’t want to be seen as. Savings, investments, even owning property weren’t ever going to be for me, and it was likely because the people around me weren’t talking about them. Not having money (because of bad spending and saving habits, not being in actual poverty) felt like an integral part of my identity, the mark of a creative individual that didn’t actively participate in the system, even when I wasn’t following any sort of career path, let alone a creative one.

But I think creative people deserve to be just as financially literate as the “money people.” I’m sure many of them are, but so many of my friends, especially the ones who could be described as “creative,” don’t seem to have an interest in talking about it. Some are good with money, in that they set aside emergency savings, or save up for a trip around the world without finding themselves in debt over it. Some are bad, not bothering to save anything that doesn’t go towards paying off student loans, burrowing themselves deeper into a rabbit hole of credit card debt. And it’s accepted among all of us that that’s just how it is — you’re either good with money or you’re bad with it, and it’s probably not going to change, and who wants to talk about it, anyway.

I don’t think being good with money necessarily has anything to do with your character, and when I talk about it, I don’t want to seem like I think it does. But I also think learning about money, which necessitates talking about it, is so important to your own self-care — something so (rightfully) valued by so many creative people.

I also have to remember that I personally didn’t want to talk about money until I came to the conclusion myself. At the risk of sounding ~precious~, I have to credit Chelsea with starting my financial education around the same time she started TFD. I simply wouldn’t have started reading a personal finance blog if a writer I already liked hadn’t led me to it. TFD made money accessible, for me, because it made money personal and interesting; it made being frugal feel chic and powerful. I needed to be gently eased into these conversations that were so foreign to me. (My own mother, herself quite good with money, had tried time and again to discuss savings and retirement with adult-me. I didn’t start taking these discussions seriously until I started learning more about these topics on my own.)

We also can’t ignore that people who aren’t around money aren’t as privy to conversations about growing wealth as those who are. To pick an obvious example, the finance industry is vastly made up of men who are overwhelmingly white. STEM jobs are some of the highest-paying in the country, yet even in comparable positions, white people earn more. I personally started thinking more about money because I started reading about it; I had to actively learn about it myself, whereas people with higher-paying jobs seem to just know more about it, because money begets more money. Talking about it has to become the new normal. So many of us are left out of the conversation, so taking care of ourselves and our finances feels like a radical act — even though it shouldn’t have to be.

I never wanted a job in STEM or finance, or in another industry that was guaranteed to make me more money than writing, because they didn’t align with my skill set or interests. But I also had to learn for myself how to start using that skill set to earn more, and what to do with money once I got it. We will continue having larger conversations about the wage gap and income inequality among different demographics, but I also believe that big changes will start once smaller discussions are happening more often. And, for me, these smaller discussions are going to be with my closest friends. We don’t have to tell every single person the details of our salaries and investing portfolios — those things are still personal. But personal doesn’t have to mean secret.

I want to talk about money with my friends the way we talk about sex. I don’t think any of us are afraid to exchange (some) details of our sex lives with each other, because we don’t fear being judged, and we know we can relate on some level. I want to offer and receive the same kind of reassurance when talking about money, if not more. On my end, it’s something I have to work on. I can’t back away from conversations because they’re uncomfortable, but I also need to be more understanding and open-minded when such topics come up. But we have to normalize the conversations with our close friends, because the more we talk money, the more we’ll all benefit.