Stop Asking Couples When They’re Going To Get Married 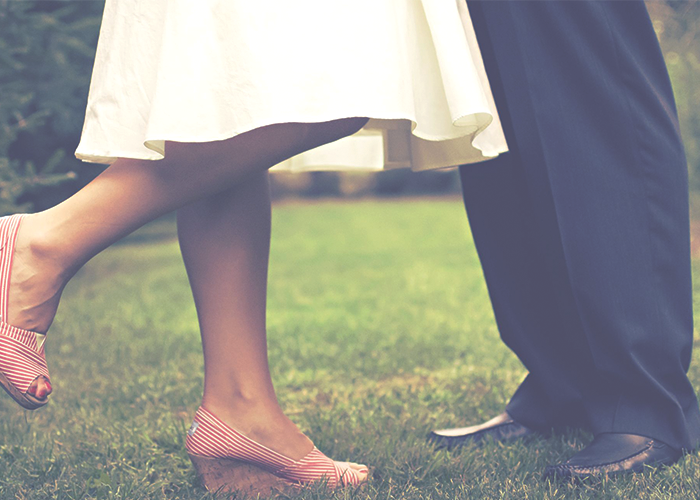 Like many couples who have been together for a decent amount of time (nearly five years for my beloved string bean and I), the questions of “What’s taking [him] so long?” or “When are you guys tying the knot?” have started coming more and more frequently. Today, it’s at the point that these questions have essentially become the greeting of several extended family members and particularly romantic friends. And while these questions are always asked in some level of jest, and are never meant to hurt or offend (or accidentally put anyone in an awkward position), it’s still a line of questioning that we should probably remove from polite society. Having my parents live vicariously through the weddings of my friends is one thing — I know they want the big, special moment, and I have thusfar denied them that — but essentially being accused of dragging our feet by everyone from aunts to salesgirls is quite another.

The thing is, when it comes to the social norms behind this kind of question, we’re probably the kind of couple best-equipped to receive it. We’re a couple who generally believes in the concept of marriage (if not necessarily the wedding-industrial complex), and looks forward to doing just that someday. We are not a) opposed to the idea of marriage, b) uncertain of what we want in the future, or c) not in a good place as a couple. But the thing is, many of the people you ask this kind of question to might be in one or more of those positions. So, instead of being a light (if occasionally sweet) irritation, the question will be actively hurtful and damaging. It might be rubbing salt in a pre-existing wound, or reminding them that their personal life choices (such as not getting married in any traditional way) are a constant disappointment to others.

You can generally bet that, if someone wants to get married to their partner in the near future, they will tell you about it. They will share their hopes and excitement (and maybe even some vague plans) in private, and you won’t have to ask them. But even if they have, that’s still not a cue to put the both of them on the spot in public, because what could you possibly expect as an answer? “When are you finally getting married?” “Exactly two months from now, we just didn’t tell you because we didn’t want to invite you!!” Of course no one wants to hear that, and it’s probably not the answer, but it still doesn’t make throwing that question around willy-nilly a good idea. You can trust one or both of them to keep you abreast of their plans, generally.

And even if they don’t, it’s honestly no one else’s business what someone is planning to do. And the more we ask people when they are going to get married, or have kids, or get a ‘real’ job, or cut back at work for family, or make any other choice in the laundry list of choices we think that people need to make, the more they feel obligated to make them — whether or not they actually want to. We are actively creating cycles of people creating lives for themselves that they would have never otherwise chosen, because they knew it would make loved ones happy, or impress the right people, or somehow signal reaching another ‘milestone’ in life. We insistently ask when people are going to get married, and are shocked at the 50 percent divorce rate. We berate people until they get an office job, and then wonder why there are so many people who hate their cubicle-bound lives.

We force people, constantly, into logistically, financially, and emotionally consuming situations that might not be right for them. We push people further and further into things like the expensive, “real” wedding, assuming that it’s just what everyone wants, when the cost and complication could be the exact thing they’re avoiding.

Maybe some people would make these choices regardless, because they think it’s important to do so, or because it really was the right decision at the time. But that’s their choice to make, and what you’re saying to someone by consistently asking the question — just like when you ask a woman when she’s going to have kids — is that there is something incomplete or wrong about them not making it. And this is fucking ridiculous, because the last thing the world needs is more people who are getting married (and spending tens of thousands of dollars on a party to celebrate it) because they think it’s what’s expected of them.

Spoiler alert: Some people don’t want to get married, ever. And some people want to get married, but want nothing to do with a wedding ceremony. And this doesn’t mean that their love is any less meaningful, or any less committed to one another. It just means that their way of loving doesn’t look exactly like yours, and that’s fine. Only a week ago, a girlfriend was telling me that she doesn’t know how to break it to her parents that she has no desire to get married to her boyfriend of four years, and neither does he. It makes them happy to live together, and perhaps become domestic partners, but neither of them believe in marriage. And they know this will be a huge disappointment, if not an outright offense.

(This isn’t even considering, by the way, the people you might be pressuring with the questions who aren’t even sure they want to stay together, which is a whole other can of socially unacceptable worms.)

But at the end of the day, it’s 2015, not turn-of-the-century aristocratic London where all of our family’s honor and financial well-being depends on people getting married as quickly as possible and securing that alliance. People are allowed to take their time, or not do things your way at all, and it shouldn’t matter to any of us what anyone else chooses to do (or not to do). Asking people repeated questions about their plans to solidify their life choices in a way that pleases society is irritating at best, actively harmful. And while most people will probably just roll their eyes and laugh it off, you have no way of knowing the discomfort that might actually be causing them.

So just err to the side of caution, don’t be an asshole, and stop asking people when they’re going to get married. You’ll know when that happens, trust me. They’ll let you know.