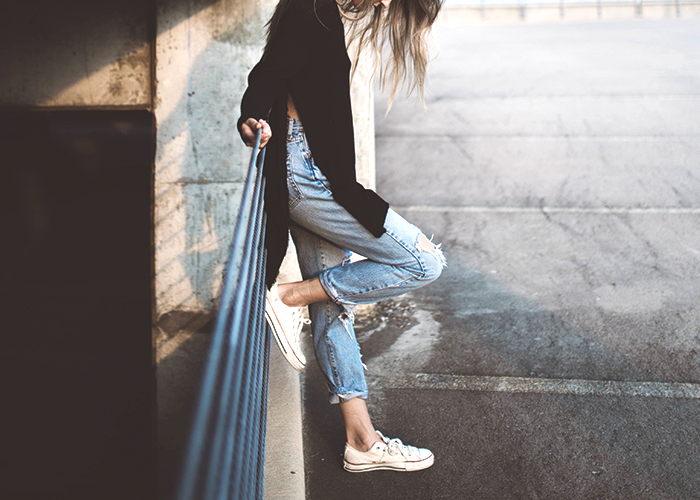 It doesn’t happen often, but there are times when I’ll be walking down a street in Manhattan (usually it’s somewhere in the West Village, but it can also happen on Fifth Avenue), and I’ll see a mannequin in a store window that stops me entirely, and makes me forget what I was doing. Usually it will be in the window of an upscale, business-casual-heavy retailer that seems to deal mostly in neutral colors, like Club Monaco or certain Ralph Laurens. In that mannequin, and on that blank mannequin’s face, I’ll see myself, some future version of myself where I am wealthier, smarter, have clearer skin, and always get up early enough to make myself a small breakfast and read the news before work.

It’s all incredibly silly, and I tell myself in the moment that I’m exactly the impressionable 20-something woman they were imagining in the visual merchandising department when they came up with that window display, but I can’t help it. I’ve always been one of those women who imagines that a certain bag, or dress, or even $120 haircut will make me into the person I think I am just short of being, including all those personality traits and habits that obviously cannot be changed by changing clothes.

Like many kids, I grew up on a steady sartorial diet of Old Navy, discount stores, and sale racks. My parents were of the philosophy that, as a kid/pre-teen/teen, I was going to grow out of those clothes pretty soon (and/or destroy them), so it wasn’t a place to invest. And whether they were experiencing financial insecurity, as they did when I was very young, or were more financially comfortable, as they were in my teenage/college years, they remained extremely judicious about the kind of things that warranted splurging on. They prided themselves on paying off everything diligently and quickly, and only broke out their credit cards (including their store-specific ones) for very precise purchases. No matter how I begged and cajoled, a pair of Abercrombie jeans was just never going to be something they caved on. Perhaps, at Christmas, I’d get a few items they found on sale at one of my dream stores, but it would never be the items I coveted.

And in middle and high school, where the entire social economy is often based on what you are wearing and how you wear it, my discount wardrobe felt like a brand on my forehead. It didn’t matter that my parents lived well below their means in a time when most of the country was falsely inflated with credit — the crash didn’t even come until after I graduated. As petty as it sounds now, I would have preferred at the time for my parents to go into credit card debt to get me the social capital I wanted in the form of clothes and other material things.

I know that this is not an exceptional experience, and I also know that it’s the kind of experience which, coupled with living through a serious economic crisis, should give me even more of a reason to be a savvy spender who does not waste her money on frivolous consumerism. And for the most part, I don’t. In the past year, even, I’ve managed to cut out fast fashion entirely, and learned to spend on things that actually merit a little up-front investment. I’ve bought much less this year, but of much higher quality, and I pride myself on having a closet full of mostly-neutral, versatile items that aren’t constantly falling apart. I am not the type of person to go into a store at random and load up on shit I already have, at the expense of my credit card. I’m actually quite good about buying all of my “fun” spending on my debit card, so that I can immediately feel the pain of it being taken from my account, and really have to consider whether or not it’s worth it.

But that doesn’t mean that I don’t feel that pang of longing for the better person I could be if only I could buy this, wear that, have this. If only, if only. At the risk of playing armchair psychiatrist for myself, I know a great part of this comes from never having access to those things growing up. I was able to imagine that the perfect life I projected onto the chic, well-dressed people could have been mine, too, if I had the same things they did. As I pulled at the sleeves of my promotional Old Navy Fourth of July tee shirt, I wondered how much easier things would be if I were wearing the things I wanted to. Because in my mind, I knew exactly what I would look like if I had the means, I had picked out the specific items and understood what would have flattered my adolescent figure. I had the taste level, you see — I just couldn’t express it!

And that was what felt, and in many ways still feels, like the injustice to overcome. That you can picture exactly what you would be like, so it’s not for lack of imagination or eye. It’s because you don’t have this item or that, that you can’t fully realize the version of yourself that’s been creative-directed in your head. Yes, of course, that imaginary person also comes with the upgraded life we project onto people who walk around with our exact ideal style, but even just that perfect brushed-camel coat or pair of spotless chestnut riding boots would be an enormous step in the right direction. That is the person we imagine exists inside of us, in whatever version we see it, and it’s very hard to accept the idea that we have to work with the palette we have, and the budget we fit into.

I admit that, even this year, I’ve bought things that I’ve almost immediately regretted, simply because I felt that owning them would get me closer to this person. I still feel beholden to those desires, to that imaginary life. And I guess that, instead of the table of laughing, shiny-haired girls wearing Abercrombie, I have Instagram accounts of young women who manage to pick an aesthetic and embody it entirely, in everything from the cut of their jeans to how they take their coffee. It’s just as powerful, and the idea just as hard to shake: that I can spend my way into being that person. I can’t, and I am lucid enough to understand that every item I buy just becomes another one of my things. And as with everyone else, everything that is mine has a magical ability to become less attractive, less perfect, less what I thought it would be. By virtue of hanging in my closet, even the most-coveted item manages to slowly lose its luster, until it’s just one of many things that I’ll pass over while whining about how I have “nothing to wear.”

There is no one item that will be immune to the everyday, that will manage to make those life changes that must come from within, not from owning the perfect robe to start my morning in. There is nothing that will finally be the purchase, that will manage to make me better in a way that I am not capable of achieving on my own. Everything I buy will eventually settle into the general dust of my life, and in a way, that’s a great thing. Because whether I’m wearing a tee shirt and sweatpants, or the head-to-toe fall look of a Club Monaco mannequin, I’m the same exact person — unless I actually work to improve her, instead of spending money to put her in a prettier package.