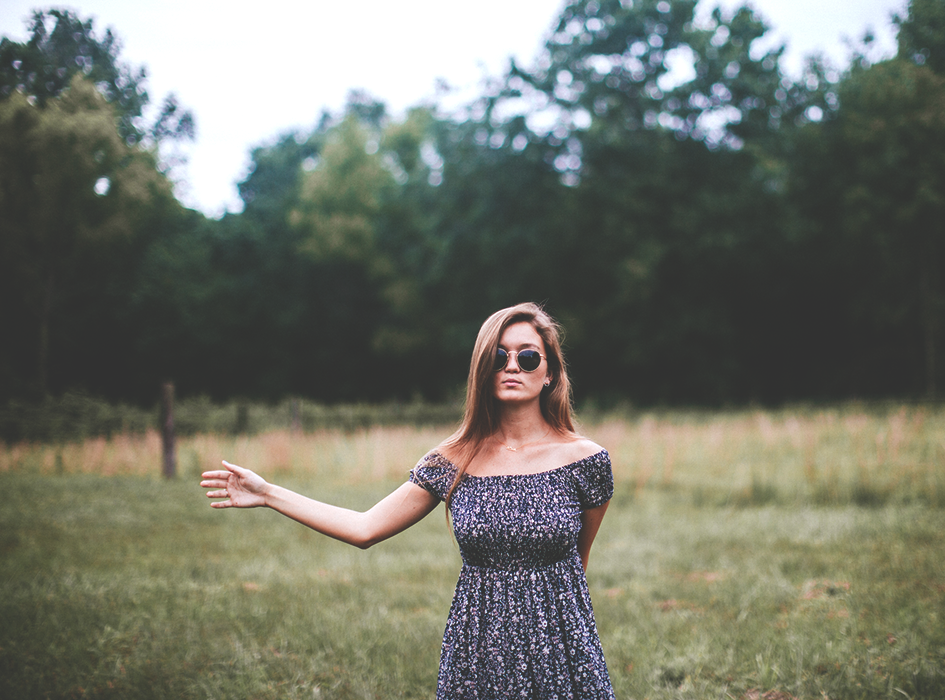 Sometimes, the quest for frugality can drive us to do ugly things. One of those things is mooching.
You probably know some mooches in your life. I know I do! In every social group, there’s That One Guy who comes to every party, eats and drinks as though he’s storing up for a long winter’s hibernation, and never offers to bring anything or chip in. He begs rides and never offers gas money. If you do him a favor, you’re extremely unlikely to be thanked with a kind word, a gift, or a return favor in the future.
On the other hand, in the rare instances where That One Guy actually orders a pizza for the group, out comes the calculator. He’ll send you a dead-serious Venmo request for $2.40 for your 1/8 of the pie. And no, he did NOT forget to factor in the tip, sales tax, or delivery fee.
Mooching, also called sponging, is when someone repeatedly asks for help from others. They won’t work very hard to help themselves first, and they have a low likelihood of returning the favor or ever ceasing to ask for help.
Sometimes it’s just a bad habit born of obliviousness, shame, or immaturity. Other times, it’s a sociopathic act of deliberate vampirism.

Are you really prepared to give up on all that fun?
The line between mooching and non-mooching behavior should be thick and dark, but that line can become blurred when you’re a frugal FIRE-starter.
The first step that many people take on their quest for financial independence is to slash their spending wherever possible. That usually means your “fun money” budget gets gutted. Whatever you once spent on bar tabs, dining out, movies, group vacations, and live events all becomes “break out of the Matrix” money instead.
But here comes the issue: man cannot live on bread alone. You are a human being, and human beings love to have fun. They love drinking tequila and eating fried calamari and going to Bonnaroo. And if you starve yourself of the things that bring you social fulfillment and joy, your subconscious might start to look for other ways to fulfill those needs.
Like mooching off your friends.

If you’re not actually prepared to give those activities up, you may find yourself tagging along, hoping someone will offer to spot you. You may be tempted to overindulge if/when someone else is paying. Or you may cave yourself and end up indulging impulsively and feel bad about it later. Either way, it ain’t good.

If you’re not actually prepared to give those activities up, you may find yourself tagging along, hoping someone will offer to spot you.

That’s why we Bitches advocate creating space inside your budget for a reasonable amount of frivolous fun. Life is for the living, after all. (Also, JFC, there are tons of ways to have fun that don’t require much in the way of spending anyway, ya jamook.)
Have you become Borrowinda, Queen of the Borrowers?
Another aspect where frugality can lead you to become a mooch is when you try to buy fewer things knowing you can borrow them from friends or family members.
Now, borrowing is great. It saves money and creates less waste. But borrowing isn’t as simple as that.
When you borrow somebody’s stuff, you’re inconveniencing them, even if only mildly; you’re adding wear and tear to the item itself; and you’re reframing your friendship with that person as one of convenience. If the only time I hear from a friend is when she wants to borrow my car for the afternoon, I start to assume she likes the car a lot more than she likes me.

If the only time I hear from a friend is when she wants to borrow my car for the afternoon, I start to assume she likes the car a lot more than she likes me.

There are ways to wash the stink of mooching off the act of borrowing. Thank your lender multiple times, with sincerity. Offer to loan them something in exchange. Send them a card, or a gift, especially if the borrowing becomes frequent. Do them a solid the moment an opportunity presents itself.
My next-door neighbor has every tool under the sun, and if there’s a single-use tool that I need, I knock on his workshop door. But every time I return it, I bring over some home-baked goodies as well. We also make sure to bring his trash cans out for him, mow the side of his lawn closest to us, and basically do whatever we can to convenience him (that’s the opposite of inconvenience, right?). It keeps the relationship from becoming too one-sided. 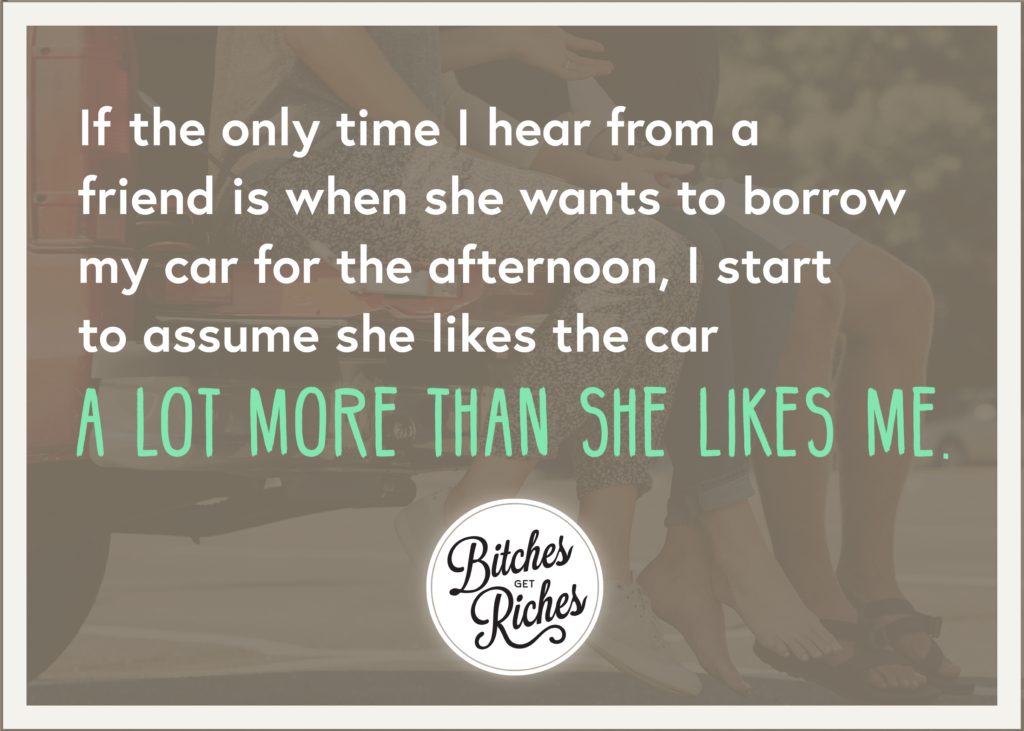 Have you favored others as you have been favored?
Favors make the world go ’round, especially when your world don’t have a buncha damn money in it.
Here’s one example. My background is in graphic design and business communications, so I get asked to help other people with their resumes… A LOT. In fact, let me go check out my “friend resume” folder right now… Yep. Just as I suspected. Fourteen resumes workshopped and redesigned over the past two years. (Piggy interjection: Including mine! Piggy out.)
Now, this is something I am happy to do for my friends. I love them and I want them to have great jobs and make boatloads of money, so I will always find the time to do it. But favors like this can become a pretty big time suck, as I spend four to six hours working on each one, and at least half a dozen people ask me for help each year.
We’ve addressed the delicate art of the friend trade before. We Bitches believe that when you’re asking for favors that would require moolah from a non-friend, you need to make extra sure to return services of a comparable value.
In my example, let’s say you know my regular rate is $100/hour. (Which it is, by the way. Raise your rates, hunties.) If you’re committed to not being a mooch, you should consider yourself indebted until you’ve repaid me with $400 worth of return favors. You may think that $400 is an impossible sum to pay back, but it’s shockingly easy to do. A long weekend of dog-sitting for my two little money pits clears the debt entirely. And you add extra value on top, because I trust a friend more with my dogs than a stranger. It’s a win-win situation.

Now, to be clear, friends shouldn’t be too exact in keeping tabulations with each other. You don’t want to be Jack Donaghy, with little dollar amounts floating in a HUD over the heads of everyone you know. And you should not accept gifts or return favors if you know damn well the person giving them cannot afford to do so, especially if they’re asking because they’re in a rough spot. Ideally, your friendships will be tight enough that minor discrepancies just become part of the normal give-and-take of all relationships.
But friends also don’t use each other or disrespect each other’s professions. That’s why we think it’s better to use a real money value as a rule of thumb to show your appreciation for the help you received.

Now, to be clear, friends shouldn’t keep too exact of tabulations with each other. But friends also don’t use each other.

If you aren’t paranoid about being a mooch, you’re not paying enough attention
There’s a right way and a wrong way to be frugal.
As we’ve discussed in the past, being frugal is no excuse to be a bad-tipping garbage person. Extreme financial discipline is a process that requires consent. If there are ill effects, you need to make sure that you’re the one who feels them—not service people, your family, or your buds.
The FIRE community has a smug streak. Come on, you know it just as well as we do. And smugness is a symptom of immaturity. It’s comparing yourself favorably to someone else (somebody whose priorities and situation may be nothing at all like yours) to make yourself feel more secure in your choices. It’s gross. And it’s beneath us all. We really want to encourage more emotional maturity in how we look at money issues.
Part of being an emotionally mature frugal person is performing a regular inventory of your behavior. Financial independence is an awesome, amazing thing… but not when it comes at the expense of relationships that are priceless and irreplaceable.

Financial independence is an awesome, amazing thing… but not when it comes at the expense of relationships that are priceless and irreplaceable.

Be your best, non-mooching selves, everyone! We believe in you!
Kitty and Piggy are head bitches in charge of Bitches Get Riches, a blog about finance, feminism, and fresh af RuPaul gifs. Sometimes they write about guinea pigs and video games. You can follow them on Twitter and Tumblr.