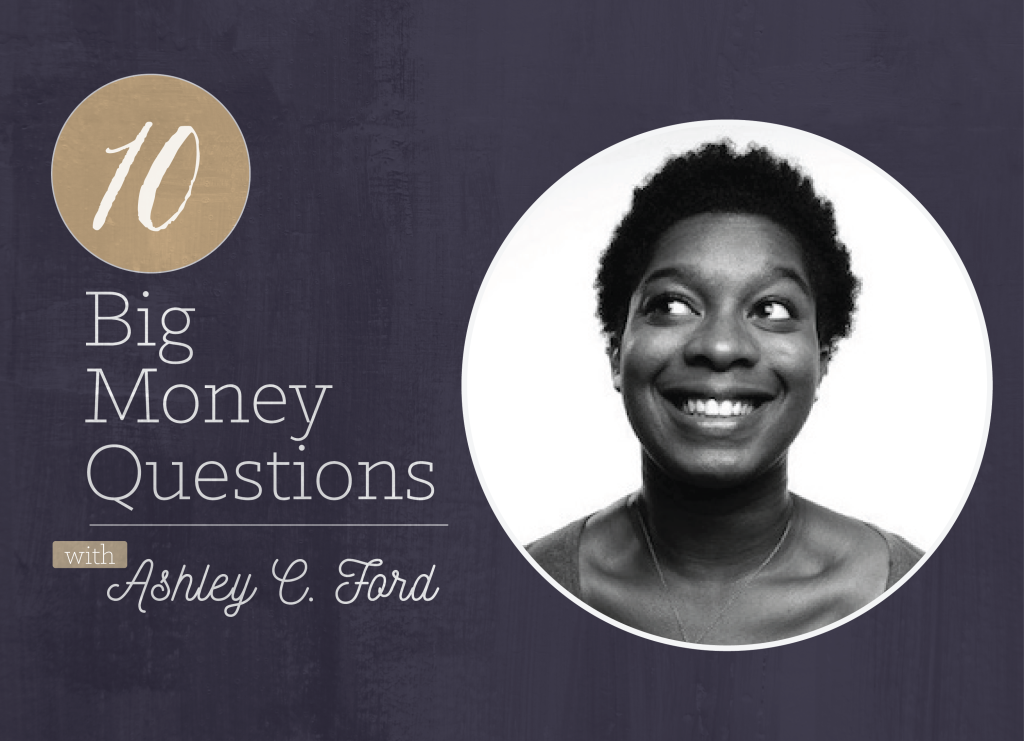 When it comes to things you aren’t supposed to talk about in polite conversation, money is probably at or near the top of everyone’s lists. Every layer of money — how much we had growing up, how much we have now, how much we owe, how much we spend — is more taboo than the last, and speaking about our own stories is often taken as an indictment of someone else’s. It’s hard to be honest about where we come from, and it’s even harder to be honest about where we are now, because having what is perceived as “too much” or “too little” can be equally socially damaging. So we avoid the topic altogether, and no one’s feelings get hurt.

But if we believe in one thing at TFD, it’s that money shouldn’t be taboo, and that one person’s honesty about their own life is not a personal attack on anyone else’s. Having more or less than someone is not something to be ashamed of, nor is it something to be proud of. It just is, and the sooner we accept that money is just like any other necessary aspect of human life, the sooner we can break that taboo and start learning from each other, just as we learn in talking about love or work.

To do our part in creating that conversation, we came up with 10 Big Money Questions, which we’ll be asking every other week to a different woman, to learn more about her money story. We want to talk to women who are hardworking, smart, thoughtful, and who come from every possible background in terms of money. And for us, there is no place better to start than with this week’s interviewee, Ashley C. Ford.

Ashley is a writer, editor, speaker, and professor at The New School here in New York. She writes for everyone from ELLE to The Guardian to BuzzFeed, and is seen as something of a den mother of the internet writing community — always supportive, always uplifting, always inspiring you to do better with her own accomplishments and enthusiasm.

She has been frank on Twitter and elsewhere about her desire to be more transparent with money, so we decided to take her up on that and make her our inaugural 10 Big Money Questions interview. Read our questions, and her answers, below.

1. What was your relationship to money growing up?

Growing up, my relationship with money was pretty warped. I was constantly aware that we didn’t have enough it, though I think we were insulated from some of the worse parts of being poor (hunger, eviction, etc.) because my mother lived near four of her sisters, and my grandmother helped a lot. It was hard watching my mother work herself to the bone to raise four kids by herself, but I would still get angry when she bought cigarettes. Even though I still hate smoking/cigarettes, I’ve only just realized that was her one thing for herself. She never bought anything for herself aside from those cigarettes, and I can’t stay mad about it.

My brother and I received an allowance for a year when I was about 11 years old. My grandmother lived with us at the time, and she would give us $10 per week for doing our chores, but there was never any talk about saving it, or opening those kiddie checking accounts. Nope, I routinely spent my allowance on a copy of a magazine I wanted (usually Seventeen or YM), a bag of Hot Cheetos, a Cherry Coke, and four kiwis. Every Friday for a year.

2. Do you feel, looking back, like you got a good education about money, either at home or at school?

Not at all! My mother was always scraping by, so money conversations were just about what she/we didn’t have to spend. I didn’t know what a savings account was for, or that it gained interest, until I was a senior in high school. Sometimes my mom would say vague things like “Protect your credit!”, but I didn’t know what that meant. Then, when I was leaving for college, she encouraged me to get a credit card because there would be little to no help coming from my home. Not that she didn’t want to help, she just didn’t have the money.

My mother wasn’t able to help me with my FAFSA because she didn’t know what it was, and neither did anyone else in my family. There was no one to help me navigate the loan process either. In fact, when I tried to talk to my school counselor about helping me with FAFSA and loan information, he just kept asking me why I wasn’t going to the local college instead of the one an hour away, and that I should really consider whether or not I could handle that move. I found the entire experience discouraging.

3. If you have debt, what are your strategies and philosophies for paying it down?

After years of paying off medical and credit card debt, all accrued while I was in college, I only have one credit card and my student loans. The plan is to pay off my credit card by the end of February this year. As for my student loans? I don’t know what the plan is there. I want to pay them off as soon as possible, but sometimes the number seems so overwhelming it’s hard to feel like I’m making a dent.

The only strategy I use to pay off debt is to make a payment plan, stick to it, and when I have some extra cash to throw at it, I do. My debt is frustrating, though, because if I knew a quarter of the really simple financial education I have now, I never would have amassed so much.

4. What is your current job (or jobs!), and how did you get to where you are today in your career?

Right now I’m a freelance writer, editor, speaker, writing workshop leader, and a part-time creative writing instructor for The New School. Oh! And I’m also editing an anthology of essays with my friend and mentor Roxane Gay. And I’m finishing a memoir. I know it sounds like a lot, and it is, but I truly love the work I’m doing right now, so it doesn’t feel overwhelming most of the time. In fact, most of the time I’m caught someplace between being a workaholic and being entirely too sentimental about my work.

As far as how I got here, I can’t say I’m always sure. I know that I spent a lot of time avoiding writing, even though I knew I loved it, because I’d been told that writing wasn’t a viable career, and I didn’t want to be broke forever. I tried to have a lot of other jobs before I had writing/editing/speaking jobs, and I was not great at any of them. Most of my jobs just ended up showing me exactly what I didn’t want to be doing, and surprisingly, that was more helpful than anything else.

As far as the timeline, I left college in 2012, started three part-time jobs, lost all of those jobs when my car broke down, started a job I loathed two months later (on my 27th birthday!), left that job to work for an awesome marketing company for a year, left that job to move to NYC and write for BuzzFeed, and left that job to strike out on my own and see what working for myself full-time would look like. There are obviously lots of things that pushed me forward during this time, and most of them started with me putting out into the world that I was looking to try something new, and people I knew or people I met online reaching out to me with opportunities. A closed mouth truly does not get fed. Ask The World for what you want, and if you’ve done your part, sometimes The World comes through. It’s always worth a shot.

5. When was the first time you negotiated for yourself, at work or otherwise? Can you tell us a bit about that?

The first time I negotiated for myself was at that marketing job, and I’m embarrassed to say, it’s only because my boss insisted I negotiate with her. She had a thing about women not advocating for themselves in business, and she essentially taught me how to negotiate for myself. After working for her full-time for almost year, I wanted to negotiate to a part-time schedule, so I could focus on my writing more, and I wanted to keep my health benefits. We talked it over, and I got something I wanted, and she got something she wanted, and we were set. It wasn’t hard because it was a small business, and she was reasonable, but it was a huge learning experience for me. It was the first time I’d ever thought about and maintained what I wanted before signing a work contract, instead of hoping the employer simply offered what I wanted.

6. What is something you understand about money now that you wish you had before you graduated from school and entered the “real” world?

I wish I’d understood that you don’t have to put away large chunks of money in savings to make a difference in your finances. I wish I’d known that even saving a little money, just a few bucks per month, puts you in a better position.

7. What is one of your biggest money-related mistakes that you’ve made? What did you learn from it, and what do you do differently now?

Hard to choose just one, but I’ll say the biggest money mistake I’ve ever made is accruing late fees. Once you start accruing late fees on credit card bills, medical bills, even utility bills, it’s all just bleeding money from your already-shallow bank account. If I could go back, I would have realized that at certain points in my life, there were people around me who I could have asked for help with money. Even if just meant borrowing $50 so I didn’t end up owing $75. It’s much easier to pay back a friend or family member than to face fees and interest from various entities. So, if I find myself in a financial conundrum — which I definitely have since going full-time freelance — I ask for help. And I have a separate savings account whose only purpose is saving up enough money to pay people back who have helped me.

8. What is one big financial goal you still have for yourself? Are you currently using any concrete strategies to pursue it?

I’ve never had three months of living expenses saved up, and I’m working on that right now. The plan is for my partner and I to save 15% of our income every month until that happens this year. It’s a safety net I’ve never had before, and I’m really looking forward to it.

9. How do you deal with financial setbacks when they happen?

Now, I deal with them like an adult. I ask for help, and I cut back as far as I can to make them work. That was not always the case, but it’s the better way to deal with things, I’ve found. Don’t ignore them and ask for help, if you can.

10. What is your personal definition of success, and do you consider yourself successful?

My personal definition of success is living the life that challenges you and makes you proud. By that definition, I am absolutely successful. However, that only applies as long as I don’t get complacent.