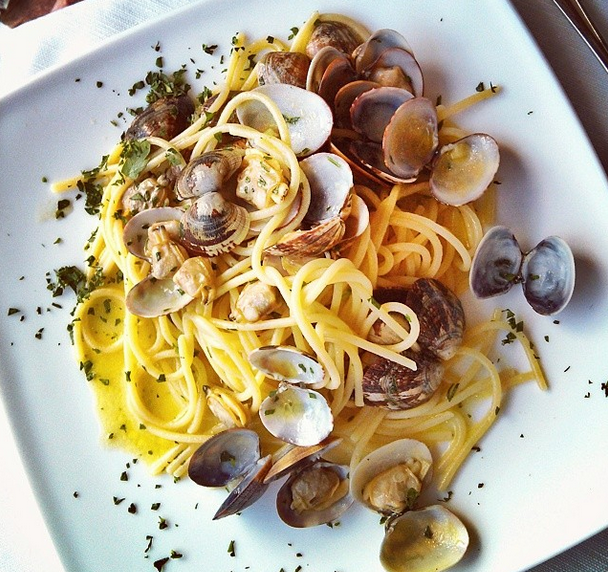 We all know the scene. A long, delicious meal with plenty of wine and multiple courses is drawing to a close, and the five to 10 people at the table must, in their mild-to-serious drunkenness, figure out how exactly to split the bill. There is some debate, there are different options proposed, and there is eventually some halfhearted agreement that usually ends up — if the server has not protected him/herself with the added gratuity — with someone getting a little bit underpaid. It’s not a fun scene, and can easily put a damper on what was otherwise a great night out, not to mention expose some serious differences in how people at the table view going out, and what is a reasonable spending expectation for a fun evening.

I personally hate these scenes, maybe more than most, because I am extremely anxious in restaurant situations when I perceive people at my table being disrespectful, from my time in the industry. (I break into cold sweats when we all say we’re ready and one person lingers over the menu, without apology or acknowledgement, while the server looks impatiently at their other tables.) Anyway, it is my personal mission to eradicate the awkwardness in all its forms, and I’ve found seven basic rules to help prevent this nonsense, often way before the bill comes.

1. Know what you’re comfortable with spending, and don’t allow yourself to get sucked into more.

I have several friends who go into a restaurant with the mentality that they’re going to order one small entree, drink water with maybe one beer, and get out of there for 20 bucks including tip. This is fine, except for the fact that they often don’t say anything, and when people are ordering bottles of wine for the table or shared appetizers, they don’t say anything. The check eventually comes, and they either a) passive-aggressively stew about having to pay for things that they consumed but didn’t really want, or they b) get really anal about splitting the check precisely for the things they initiated, down to the dime. Both of these solutions are bad, and the appropriate thing would have been to either sit out the meal, be very up-front about what they are willing to spend, or suggest a less expensive restaurant. Yes, it is a moment of discomfort maybe, but it’s much better than everyone feeling cheated and upset when the bill actually comes.

This is sort of the opposite of the previous point, but equally important. Everyone has friends who are on their same wavelength, financially and in terms of restaurant-spending, and that’s great. You know you can order the bottle of wine, or the app, and they are enthusiastically going to share both the food/drink and the bill itself. But for people you’re less sure about — or a larger group — if you want to propose something, you must be careful to actually find out who wants it. Take a show of hands, let someone else choose the actual item to ensure interest, and take the opinion of the group at large. Don’t lead everyone into a bill with 20 bucks of upcharges each without being sure that everyone wants it.

3. Don’t nickel-and-dime over a few bucks at the end of things. Try to keep it in a place where you can split it evenly.

I’m sorry, I know that some people probably don’t care about this, but for most people at the table — as well as the poor server — having to make every single bill a different decimal point when there are seven people at the table is ridiculous. If everyone got more or less the same thing — shared apps, entrees within five bucks of each other, some wine — then just suck it up and pay four extra dollars, with the knowledge that someone else is paying four dollars less. If you guys are friends, it should not be a big deal, and you should also know that at another meal in the future it will be reciprocated when you for for the steak instead of the roast chicken. It’s just a much more sane (and friendly) way to handle things.

This is not an ad for Venmo, it is just my honest-to-god belief in this perfect system. Don’t have cash? No problem. Have weidly specific amounts you need to contribute? It can handle decimal points. The other person is worried that the wine-drunk people won’t pay? It’s instant, and can be done while they’re waiting to sign on their check. It’s the ultimate solution to a bill of any size being put on one card with everyone else being able to pay instantly, and the bill-taker not having to walk around with tons of cash for the rest of the week. The server will love you, and it will take a ton of confusion out of the entire process. Get fucking Venmo.

(And by the way, I have taken to ALWAYS volunteering to be the person to take the bill and be paid, because if you pay your credit cards on time — which I assume you do, heh — it’s a perfect opportunity to get a bunch of extra miles/points/cash back for basically free.)

If the rest of your table cannot trust that you’re going to be tipping as well as everyone else, it’s going to make the whole scene infinitely more awkward, and make everyone either look bad because of your cheapness, or make everyone compensate for you without wanting to call you out personally. I have one person that I REFUSE to go out to meals with anymore because she is notoriously cheap on tips, and I always end up having to leave 30 percent to compensate for her, all the while resenting her flagrant disrespect for the people serving her. (She even goes on rants occasionally about how it’s not our responsibility as citizens to make up for poor laws on how servers are paid, and I guess we should express that by ripping off the server??) Anyway, if you don’t tip well, you can’t go out to eat with a bunch of other people, because you can’t be trusted.

6. Only go to restaurants you can afford.

This should be obvious, and yet it often becomes a huge issue once you’ve sat at the table with everyone and realized it’s too late to back out. It’s everyone’s responsibility to check the menu of the place beforehand, make sure that it’s not going to be an issue financially, and be comfortable with ordering at least a drink or two with the group. We’ve all been in situations where it’s not really the week we should be going to a medium-nice restaurant with a group, and it’s our responsibility at that moment to either not go, or to suggest something else. Awkwardly looking at the menu like “hmmm I guess I’ll get bread and water,” or not being able to enjoy something with everyone, is only going to put a damper on everyone’s night, and that’s just unfair. Don’t be the person who goes and then spends the whole evening commenting on how expensive everything is. You’re already there, enjoy it. Or say you’re sick and excuse yourself.

7. Under no circumstances can you split the check a zillion ways.

This is my biggest pet peeve, both as a former restaurant industry-person, and a human who realizes that our server has shit to do besides bust out a TI-89 and split up a check for a table of seven people. Many places will refuse outright, but even if they agree, it does not mean you should do it. First of all, this is always how servers end up getting fucked on tips (unless it’s already included, which it often isn’t), and it’s also just a huge hassle. And it’s tacky. You all knew you were going out together, you could have either gotten cash, or planned to Venmo for things, and there’s nothing so complicated that you couldn’t manage to just either take it all as one check or split it, max, two ways. Having everyone get a check for a slightly different, precise amount with exactly what they ordered (and a percentage of shared items! which I’ve actually seen before!) is not acceptable. We’re supposed to be grown-ups now, and it’s time we started paying for meals like grown-ups.