The Financial Confessions: I Worked Harder Being Unemployed Than I Do At My Job 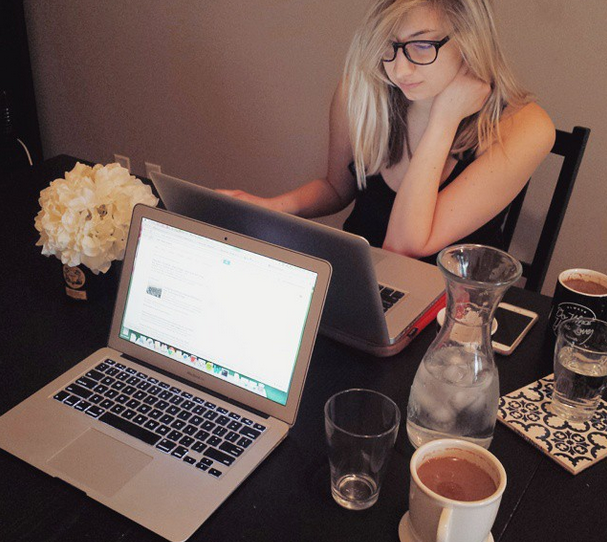 “In early 2014, I lost the job that I had held for nearly three years in the advertising industry. Up until that point, if you had asked me, I would have said that I was definitely not one of those people who was defined by their careers, unlike many other people in my field. (I love you, ad people, but some of you are way too into your jobs.) When I lost it though, through layoffs totally outside of my control, I realized just how much of my identity as a person was dependent on my job as a copywriter. For the first few days, I didn’t tell anyone. I just kind of walked around in a state of shock, drinking a lot of vodka martinis and more or less ignoring the fact that I had to leave my beloved desk in less than two weeks.

When I finally started telling people, it really dawned on me how much I took for granted not just having a job (and the income that comes with it, which in my case was pretty good), but having a career that people respected. I used to be casually proud of what I was doing, and was never afraid of questioning about my path in life, because it felt so clearly laid out before me. I would work in my field, climb the ranks, and become a great Creative Director by the age of 30-something. People were impressed when I told them about work, and it never even occurred to me that it wasn’t normal. I just assumed people treated everyone a certain way, and when I became unemployed, I quickly learned that part of the reason I was always treated so well is because I was one of those people with a Good Job.

My friends in the industry were quick to sympathize, but did not provide the infallible network of contacts that I thought they would, and it became clear that once I was no longer in my prestigious job, we didn’t have all that much in common anymore. While I initially imagined that my “funemployment” — yes, I really called it that — would last an uncomfortable couple of weeks at most, I was merely at the beginning of a seven-month spiral downwards into the reality of what it’s like to lose your job when you thought it was never a possibility.

The shame probably set in around a month, when I realized that sending out endless emails, cover letters, resumes, and requests for coffee/drinks to “catch up” were not proving helpful. It was around then that I decided that, on top of my fervent job search, I had to do the exhausting work of “pretending to be way more successful than I was.” At the time I was fired, I had about three months of funds in my savings account, a card with a 3,000 dollar limit, and parents who would maybe help me with a few grand more before they got tired of me and told me to get whatever job I could take. Beyond my basic costs of living, having to take people out and stay in the social game that goes along with getting a job in a competitive field was quickly weighing on my resources. Within four months, I was out of money.

This whole time, I was making the VERY occasional freelance gig I got through trawling everything from industry sites to Craigslist seem much more meaningful. I told people that I was “taking on some freelance work and really taking my time to find the right thing” while I spent the majority of my days frantically searching for anyone who would call me back on an actual job offer. I worked full-time, at least nine to six, on some aspect of the job hunt or meager freelance work, and at least three nights a week maintained the social life that went along with my job, including at least once-weekly “brain pickings” were I pretended to be cool and collected, bought beers, and all but burst out crying “PLEASE HIRE ME.”

And it wasn’t just the work and hours themselves, it was the overwhelming anxiety that I would be found out, that this shame that hung over me and the awkward avoidance of detailed questions about my work would come to some kind of fruition. I hated feeling like I was one of “those people” you had to feel sorry for, that everyone from my extended relatives to old coworkers were going to know that I was living off beans and popcorn so I could keep things together, while pretending to live an entirely normal life to the outside world. Unemployment, aside from being a full-time job in the search itself, is a full-time taxation on your emotional resources.

Shortly after the four month point, I started to take on babysitting work several evenings a week, to keep enough cash flow to pay rent and other necessities. While I didn’t want to engage myself in a more permanent gig that I hoped I would have to quit when I soon found a job, I knew that the stopgap solution would last a month at best. Lo and behold, by month six of unemployment (and endless unsatisfying rounds of interviews and edit tests that went absolutely nowhere), I was basically a full-time babysitter while, you guessed it, not letting anyone in my life know. My Instagram was a perfectly-curated masterpiece of someone who was taking on freelance ad work, living a great life in Brooklyn, and not at all concerned about the fact that she had 13 dollars in her checking account.

I know that this sounds insane. But the truth is that when it comes to unemployment, particularly after you’ve already worked in your field for some time, you are terrified of getting the Jobless Stink on you that will follow you around and sabotage your real chances at getting a new job. You don’t want people to know that your value has fallen, that you have reached the point in your search where “for exposure” gigs are actually looking semi-appealing, instead of the gross insult they actually are. And while I don’t think that everything I did was right or honest, I do feel that sparing myself the extreme judgment that can come in a hyper-competitive field was, ultimately, saving my mental health. Or what little remained of it.

Early in month seven, I got an email out of the blue for the ad side of a website I didn’t know that well, but who was quickly expanding and adding a lot of jobs. They had found me through Twitter, of all things, and asked me to meet for a casual coffee. I put on my best “I don’t need this job” outfit and smile, and struck up a friendly relationship with the girl doing the hiring. We exchanged emails back and forth, got a little wine drunk twice, and pretty soon I was in for an interview. By the end of three weeks, I was hired in the job I have held since.

It’s not the most interesting or prestigious job — I’m lower on the totem pole than I was at my last job, by a significant margin — but it’s a fucking job. I’m able to pay my bills, get groceries, and live my life without constant fear, refreshing my inbox 500 times a day to see if anyone’s seen my resume. I work normal (if not a little bit light) hours and go home feeling mostly stress-free. Without a doubt, I work much less hard now than I did as an unemployed person, in part because I no longer have to do my tasks with an enormous emotional weight hanging over my head. I can just live my life and do my work, instead of constantly fighting an uphill battle that never leads to anything.

If I have learned one lesson from this experience, it’s to be kind, and to not base anyone’s worth — yours or others’ — on the job they hold. Without realizing it, I used to be like many New Yorkers and start off new conversations with people about work and all that goes with it. I may have put people in the awkward situations I felt a thousand times, and I definitely contributed to the casual culture that led me to become so deeply depressed and anxious when I no longer had a career to call my own.

Now, when I meet someone, I make a point to talk about who they are as people, and not what their Linked Ins might say. Because I know that they are much more than that, and even if that title is “currently looking for employment,” that doesn’t mean they’re not working twice as hard as I am.”