The Financial Confessions: “My Engagement Ring Was The Worst Thing For My Relationship”

By The Financial Confessions | Thursday, October 08, 2015 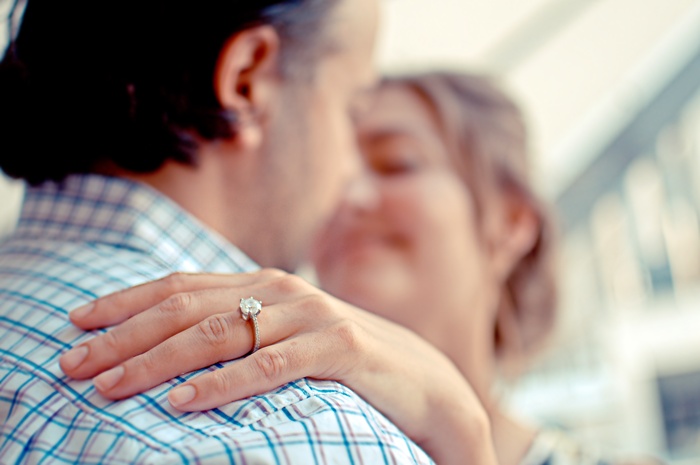 Eric and I had met at a company-sponsored community service project in the fall of 2009. We both worked at a large financial institution in NYC, but in different departments. I worked in a entry-level administrative position (I had only graduated that May, and while I did have big plans for myself, I took the first job I was offered). Eric was four years older than I, and he was well on his way to making a name and strong career for himself in finance. He was smart, articulate, good looking, and just confident as hell. We had been placed on the same team working at a local school at the community service event, and the second I met him I was hooked. We hit it off immediately, and I loved his easy charm, his passion for the career he was working for, and his ambition.

We started dating each other shortly after that, things were going great, and long-story short — he was perfect. I was head over heels in love. He whisked me off to California on a long weekend trip in the spring of 2011. At that point we weren’t even dating for two years yet, but I knew he was the one for me. As we were walking around the little town of La Jolla looking out at the cove with the seals swimming around wildly, and the sun was setting over the water he got down on one knee and proposed. The ring was. out. of. control. Nearly three carats, sparkling, and glorious. I couldn’t speak and felt slightly nauseous at the prospect of being gifted with something that beautiful. I said “yes” within the space of a heartbeat.

Over the next few months I worked to plan out every little detail of our special day with vigor and got completely caught up in the thrill of it. I found a swanky NYC venue for the reception and found the perfect church where we could exchange our vows. I had been ferociously saving over the last two and a half years, and I felt more than comfortable paying out of my own pocket for everything that came up. I wanted to feel like I was pulling my weight since Eric made so much more money than I did. I put downpayments on the photographer, paid the DJ (nearly) in full, ordered save the dates, invitations, stamps, and hired a calligrapher.

I found the wedding dress of my dreams and had even begun planning out the honeymoon. I planned to surprise Eric and book everything on my credit card — I wanted to feel like I was taking care of him since deep down I knew he was taking care of me financially. Looking back on it I know I was acting completely insane, but love can do that to you. I was completely oblivious to everything else.

Throughout this time I got little input from Eric who often seemed distracted, uninterested, and only mildly excited to discuss minute details of frosting colors, seating arrangements, and flower choices. I wrote it off easily telling myself, “men don’t really care about these things.” Eric was super busy with work all the time, and he stayed late at the office ahead of an upcoming promotion I knew was important to him. The opinions and thoughts he gave me were minimal, and (for a while) I was content with making all the choices by myself. What could I complain about? I had a fiancé who bought me the ring of my dreams, made a ton of money, and allowed me free rein to plan the wedding I always imagined. Sure he seemed distant, and in hindsight I can see all the small cracks and holes that were opening up in our relationship, but I simply ignored them. It’s true what people say about how someone sees only what they want to see. All I saw was someone whose job had temporarily taken precedence over our wedding, but if it meant a potential bigger paycheck for our household, so what?

However, over the course of the next year our relationship started unraveling in more significant ways that I could no longer deny. He became increasingly hostile with me whenever I would bring up “meaningless” wedding details, and we fought more and more. We had started looking for an apartment together, but even that process felt like pulling teeth. No apartment was ever nice enough, and I sensed the beginnings of larger commitment issues that perhaps even he wasn’t aware of. He always seemed cranky, always tired, and it seemed like everything revolved around his life at the office. Of course I respected his career, but when our nearly daily interactions were riddled with mood swings and jabs at one another, I couldn’t help but blame it on stress from work. I grew resentful.

We had roughly three months to go until the wedding and things were just…bad. Wedding planning was no longer fun, and I could no longer fake excitement over Eric’s achievements at work. My bank account had nearly been depleted, but I was too ashamed to ask Eric to reimburse me. I thought a) we would be married soon enough anyway and would have shared expenses/finances and b) I didn’t want the power dynamic to shift any further.

One weekend after a particularly nasty fight while out putting the final touches on our registry, we walked back to our apartments in silence. He grabbed my hand and pulled me to the edge of the sidewalk, and he cleared his throat more times than necessary. I started to grow cold and felt my arm hair standing up on end — somewhere deep down in my gut knew what was about to happen. He proceeded to tell me that he simply did not feel ready to be married and there were too many things up in the air that he wasn’t prepared to handle. He said he wasn’t sure where he saw his life going, and told me that he frankly wasn’t sure if we fit together the way he believed we did when we first met. I felt a huge pit in my stomach and imagined the ground slipping away as he continued talking. I was floored. Sure, I knew we had problems, but I thought everything would work itself out once we were living together and married.

After that, I endured the most difficult few months of my life. Sending out “wedding is off” notifications to our family and friends was the lowest point I had been at in my entire life. There were countless nights crying in my roommate’s arms and feeling devastatingly guilty for being so dumb. I was ashamed and broke, and Eric was sad and confused but firm on the decision that we had no business getting married. Looking back on it now, I know that we rushed into getting engaged, and we were both too young and naive to know any better. We acted rashly on things we thought (and were told) we wanted but deep down were afraid of. I allowed the massive engagement ring (which I ended up giving back) fool me into thinking that life really was some kind of fairy tale. We both screwed up in the sense that we didn’t take time to build a firm foundation of love, trust, understanding, and mutual support in and for one another.

Looking back on it now, I know that Eric felt compelled to stick to life goals and milestones rigidly, and I desired validation and someone to take care of me. It’s a mistake I’m much stronger for having made, and I got through it eventually. Now I look at life for what it is, beautiful and wonderful yes, but now I’m much smarter and cautious especially when it comes to financial matters.